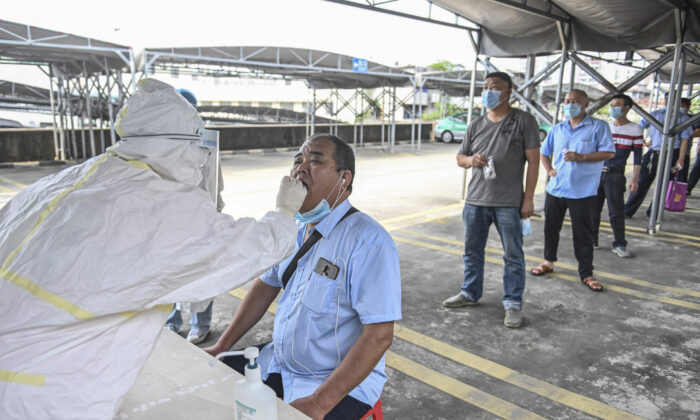 This photo shows taxi drivers queueing to receive nucleic acid testing for the COVID-19 coronavirus in Guangzhou in China's southern Guangdong province. - Companies, schools and individuals across China are lining up to be tested for the virus as the country rises back to normal life after largely taming the epidemic. April 20, 2020. (Photo by STR/AFP via Getty Images)
INSIDE CHINA

China has released official reports confirming that its latest outbreak of COVID-19 has spread to a third province, following months of reports of new cases of COVID-19 within the country. On May 21, a case was reported in Guangzhou, the provincial capital of China’s southern coastal province Guangdong, causing the closure and lockdown of a youth center and a university. More cases have reportedly occurred in Yingkou of the Liaoning Province, triggering the northeastern city to raise its emergency response level to three.

Guangzhou authorities announced at a press conference that a 75-year-old female patient went to the fever clinic of Liwan District Central Hospital on May 20 and tested positive for COVID-19.

According to the announcement, seven close contacts of the woman have been quarantined, including her grandchild who is a student at a local university. The announcement also noted that people living and working on Longjin Street in the Liwan District and nearby residents must all undergo nucleic acid testing. No one would be missed, it stressed.

Online video has shown that the Liwan District Central Hospital and the nearby Jinlong Community on Longjin Street have been blocked off, with residents also being tested.

According to social media posts, Guangzhou University of Chinese Medicine is under lockdown due to the woman’s grandchild being a close contact. All students, faculty, and staff have been required to get tested. The university is located in the Guangzhou Higher Education Mega Center, the city’s university district of 6,250 acres.

One post read, “I’m in Guangzhou University of Chinese Medicine, and the university closed down since 6 a.m. today.”

“There is a close contact in Guangzhou University of Chinese Medicine, and the whole university district is in danger,” read another post.

The lockdown of the university has attracted the attention of netizens, and two related entries made the most viewed list on Chinese social media Weibo.

The Youth Palace and Youth Science, Art, and Sports Training Center of Guangzhou city in Liwan District also suspended their classes for one week from May 21 because of the case.

In Liaoning Province, after the reporting of two more cases on May 16, another asymptomatic case was reported on May 21 in Yingkou city. The patient, a boy, was a 9-year-old elementary school student, bringing the total number of local infection to 16 since May 14.

On May 21, Jin Li, deputy mayor of Yingkou city, announced at a press conference that from May 1 to May 13, the boy had traveled all across the city, including visits to Volcano Park, Moon Lake Park, Wanda Plaza, Jincheng Bathing, Jinhua Cram School, and Wugong Buke dance school.

Netizens criticized the official announcement for being very general, without enough information for residents in the city to know if they could have come into contact with the patient.

One post read, “The notification should be more specific to tell us the activity trajectory at a specific time on a certain day, such as which places have been visited on a specific day and during which time period. How can other people find out if they have been exposed to it if the authorities do not announce the specific information?”

Due to new COVID-19 cases being reported in the city and the source of the initial infections remaining unidentified, Yingkou city has raised its emergency response level to three—the highest level is four—and has prohibited people in medium-risk areas from leaving the city.

The first official reports of infections in mainland China for this round of COVID-19 transmission occurred in Liaoning and Anhui provinces, as authorities there have blamed each other for being the source of the outbreak. Tens of thousands of close contacts of the confirmed patients were notified across six provinces.

Recently, Chinese media cited epidemic experts speculating that the earliest case of infection of this round may have appeared in Yingkou as early as mid-April.

Xiao Lushen contributed to this report.