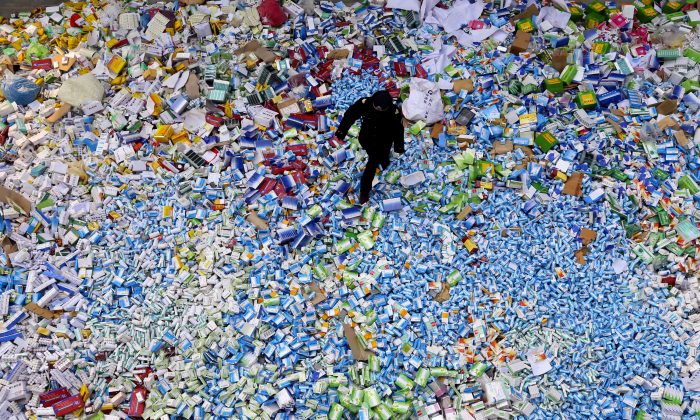 This picture taken on March 14 shows a Chinese policeman walking across a pile of fake medicines seized in Beijing in recent months. The rapid growth of Internet commerce has led to an explosion of counterfeit drugs sold around the world, with China the biggest source of fake medicines, pharmaceutical experts said as the illicit trade is now believed to be worth around 75 billion USD globally, with criminal gangs increasingly using the web to move their products across borders. (STR/AFP/Getty Images)
China

When 30 shining new counterfeit FIFA World Cup trophies, carefully wrapped and boxed, were seized by customs at a Paris airport last week, it made the news, but less well publicized were China’s three Plagarius Award won fair and square earlier this year, for outstanding global counterfeiting and product piracy.

The World Cup was a goldmine for Chinese counterfeiters. Over 2,000 more of the illegally copied trophies and more than 20,000 fake FIFA World Cup jerseys were seized before they ever left China’s shores, for starters. Counterfeiters even did well selling fake sick notes for soccer fans who wanted to stay home to watch the games.

China made a clean sweep this February of the Plagiarius Awards, an uncomplimentary German competition designed to denounce counterfeiters, winning the top prize and several other less prestigious awards. This year China gathered up the top two Plagiarius prizes, two of the Falsification Awards and one of the Distinctions Awards.

China’s unauthorized copy of a radial shock wave therapy device, “ZWave”, took top of the line for Plagiarism, followed by industrial products such as a phoney high pressure cleaner, LED Torch and Headlamps, and pressure gauges. The counterfeit products and the genuine articles are almost identical.

According to U.S. Department of Homeland Security, mainland China has remained the primary global source for counterfeit and pirated goods for years. In 2013 alone, counterfeit goods totaling $1.1 billion or more gushed from China’s busy manufacturers, representing 68 percent of all seizures by U. S. customs.

Worldwide, 75 percent of counterfeit products seized are from China, says data collected from 2006 to 2010 by the World Customs Organization.

The Chinese are enthusiastic counterfeiters, whipping up ingenious food products at the low end, such as the fake lamb shish kabobs, manufactured from cheap duck meat and spiced pork, that have become a staple item in the shish kabab industry, according to recent mainland media reports.

In past years the creative food counterfeiters concocted fake grapes, eggs, and last year made the news with fake beef made from cheaper pork treated with chemicals, including paraffin wax and industrial salts, to make it more beefy, along with fake mutton made from chemically transformed rat, mink and fox meat.

Mid-range Chinese counterfeiters are selling the iPhone 6 before it has even been released, or at least shells of the new iPhone for those who have to stay ahead of the pack, along with purses, watches and electronics. Counterfeit diplomas from respected American universities, accompanied by counterfeit official transcripts are available for a price to enterprising Chinese students.

Bestselling author Christopher Reich explained the counterfeiting phenomenon in an interview with Epoch Times last year: “In China”, he said, “Counterfeiting is not considered a moral crime. It’s almost to be applauded.”

“As their system of capitalism grew in China, copying other people’s products was really the backbone of their industry,” he said. “It’s not a big jump from making a product for someone else, to just stealing their design and saying it’s your own.”