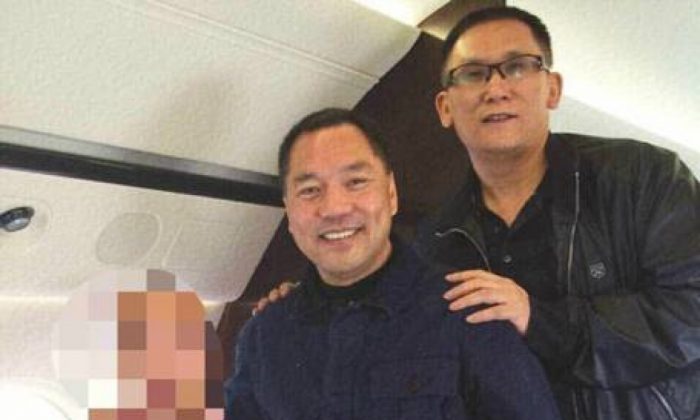 China’s Corruption Up Close: The Case of Guo Wengui

But behind Pangu Plaza, developed by businessman Guo Wengui, lies a story of sex scandals, corruption, and ties to some of the Chinese regime’s most notable disgraced officials, including former deputy chief of China’s intelligence agency Ma Jian and Ling Jihua, who formerly headed the Communist Party’s United Front Work Department.

First reported on March 24, the narrative is now making the rounds in major Chinese financial publications. The tale offers a rare look at the Byzantine workings of China’s elite, where money, corruption, and politics regularly blur, and where behind the scenes in small intrigues, powerful factional forces seem to lurk.

A Development Feud in Central Beijing

Guo Wengui, a controlling shareholder in Beijing Zenith Holdings and Beijing Pangu Investment, is now being implicated in a 2006 conspiracy to bring down then-deputy mayor of Beijing, Liu Zhihua.

There was bad blood between Guo and Liu the previous year, when Guo, having lost development rights to what was then known as Morgan Plaza, approached the deputy mayor in an effort to reacquire the property. With the upcoming 2008 Beijing Olympics, municipal authorities cited concerns about the financial viability of Guo’s project, which, if left unfinished by the time of the games, would present an eyesore to the urban landscape.

According to an inside source close to Liu Zhihua, Guo Wengui came to Liu in May 2006 with a 100 million yuan (about $16 million) check as proof that he was prepared to carry out the construction. Liu turned Guo down, who left without argument, the insider said. The Beijing Capital Group, the general manager of which counted himself a friend of Liu’s, acquired the Morgan Plaza site later that month.

Guo was reportedly infuriated by the snub he had received.

Whatever his temperament at the time, Guo’s revenge was real. He hired people to stalk Liu and obtain details about his plans and love affair. When Liu traveled to Hong Kong, staff in the pay of Guo used a camera concealed in his room to record him with his mistress.

That June, Liu Zhihua was detained for investigation. The Beijing Capital Group general manager, Liu Xiaoguang (no relation of Liu Zhihua), was also called in by authorities, ostensibly to assist police in the case.

Liu Zhihua was released in August 2006. He was fired from his position as the deputy mayor of Beijing and given a suspended death sentence on charges of massive bribery.

Following Liu’s fall, Guo Wengui’s company once again acquired development rights to Morgan Plaza. He mortgaged another project for 800 million yuan, and invested that in the plaza, and renamed it Pangu upon its completion.

Located near the Olympic park in the center of Beijing and just a 20-minute drive from the airport, Pangu Plaza was an extremely lucrative property.

According to the mainland press reports, Ma Jian, former deputy head of the Ministry of State Security, who was purged earlier this year, had assisted Guo in his effort to bring down Liu Zhihua.

Ma was one of Guo’s contacts who, among others, frequented Pangu Plaza for weekly banquets that Guo hosted. It was rumored that Ma owned one of the condo units.

Guo’s network had become known as the “Pangu Society” in business circles, according to an entrepreneur speaking to Lengjing, the financial publication of Tencent, a large Chinese Internet portal. The entrepreneur said that in 2013, a man surnamed Gao had encouraged him on multiple occasions to join the “Pangu Society,” offering nationwide support from China’s political and legal agencies.

Guo and his family seem to have enjoyed a close relationship with Ling Jihua, the former head of the United Front Work Department, a Communist political organization known more for its conspiratorial activities rather than raw power. Guo’s son, Guo Qiang, was a good friend of the late Ling Gu, son of Ling Jihua. Both sons shared a love of expensive sports cars.

Ling Gu was killed when he crashed his Ferrari. Reports later emerged—perhaps part of a hatchet job on the father, perhaps real—claiming that his son was with two women in various states of undress at the time of the incident. The elder Ling reportedly refused to recognize his son’s body while the women, having survived, were said to have been bought off by Ling’s family to remain silent about the tragedy.

Ling Jihua was placed under official investigation for corruption and removed from his posts in December 2014.

In addition to the Pangu Plaza, Guo would arrange frequent meetings for businessmen and officials in Hong Kong, giving it a reputation as the “Pangu Society’s” sub-branch. He received guests at his luxury residence and took them out on cruises on his yacht.

Guo Wengui, who spends much of his time outside China, has denied the accusations levied against him and Ma Jian, whom he came to know in 2004 when Ma was involved with security management for the Beijing Olympic Games. According to a report by Voice of America, Guo also denied having known Liu Zhihua personally.

Speaking to the Hong Kong-based South China Morning Post, Guo said that even if Ma were found guilty of corruption, it did not necessarily mean that he had any connection to the crimes.

On March 29, Beijing Zenith Holdings’ website released an accusation by Guo directed at Hu Shuli, chief editor of the Chinese publication Caixin. The news service has made a police report over the matter and stated that it would take legal action to.

Hu Shuli’s financial publication Caixin has reported aggressively on the Guo scandal, calling him a “power hunter” in a special investigative report on the fracas. Ms. Hu, it so happens, is understood to have been personal friends with both Xi Jinping, the current Party chief, and Wang Qishan, his deputy who is leading the anti-corruption campaign.

This confluence of relationships has also led to claims that behind Guo Wengui is another powerful backer, from a different side of Chinese politics: Zeng Qinghong, the former vice chairman of the People’s Republic of China and known henchman to Jiang Zemin. Jiang, who stepped down as leader of the Party in 2002, is an eminence grise of the Communist Party who Xi Jinping’s ruthless campaign of political purges has squarely targeted.

Guo denied that he went overseas to escape the Chinese regime’s ongoing anti-corruption campaign, and refused to elaborate on speculation that he held an American passport. He did, however, claim to be  “currently under the protection of the law of the United States.”