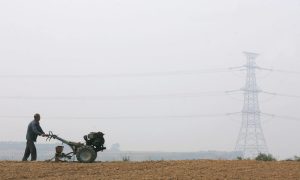 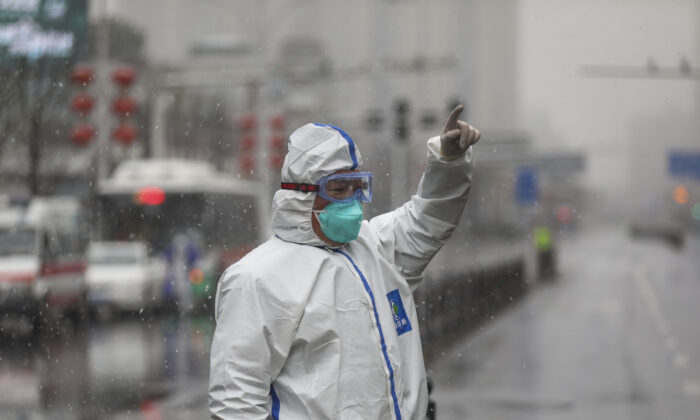 A worker wearing a protective suit gestures to a driver outside a cancer hospital newly designated to treat COVID-19 patients in Wuhan in central China's Hubei Province on Feb. 15, 2020. (Chinatopix via AP)
Thinking About China

The Chinese regime’s propaganda machines are running at full capacity in the run-up to the 100th anniversary of the founding of the Chinese Communist Party (CCP), including lauding the success of the leadership in public health. However, there are major issues in China’s healthcare system. Recently, a Chinese doctor exposed the corrupt practices in cancer treatment, which inadvertently revealed that cancer is becoming China’s health crisis.

On April 18, Dr. Zhang Yu, a medical oncologist at Peking University Third Hospital, posted comments on Chinese social media zhihu.com, warning citizens about cancer treatment scams, according to Chinese media reports. Zhang wrote about the tragedy of cancer patients in China and said that “many deaths were caused by the doctors in charge of the therapy.” He claimed that a doctor from Shanghai swindled his patients into receiving expensive and ineffective cancer treatments that cut their lives short.

At first, Zhang’s posts drew comments criticizing China’s health care system. One person wrote: “Finally someone has spoken, and the medical industry is charging too much [money].”

Although Zhang meant to disclose fraudulent cancer treatment, other comments revealed a major health crisis that the Chinese Communist Party (CCP) is trying to conceal or downplay. Some people wrote the following:

“[The issue of] fake cancer treatments is well known within the industry and to the Health Commission. They probably didn’t know it would be exposed.”

“The NHC’s coverup has delayed the treatment of innocent patients.”

“The NHC is covering it up and muddying the waters.”

As soon as more people commented on the cancer issue, China’s National Health Commission issued a statement on April 19, saying it would investigate Zhang’s claims.

At the same time, Zhang deleted his posts, possibly because he was unable to bear the consequences and pressure from the authorities.

However, Zhang inadvertently exposed a health crisis: there is a growing number of cancer patients in China.

According to the latest report issued by the International Agency for Research on Cancer (IARC) of the World Health Organization, there were 4.5 million new cancer patients and 3 million cancer-related deaths in China in 2020. China had the highest numbers for new cases and deaths among the countries reported. The WHO’s statistics were based on the data from the CCP’s Health Commission.

Liaowang Thinktank, an institution run by state-run Xinhua News Agency, reported that “cancer will kill 3.5 million Chinese in 2030,” according to an article by Chinese news portal Sina. Sina quoted Shen Lin, vice president of Beijing Cancer Hospital, as saying, “It is estimated that there are more than 3 million new cases each year, but in the end, we don’t know the exact number. Because even cancer diagnosis is a problem in many grassroots and poverty-stricken areas.”

Zhang’s post also pointed out the fact that many Chinese doctors in charge of cancer treatment aren’t proficient in oncology, as many of them have been transferred over from other medical fields.

This simply shows that the CCP’s health care system is broken. Compared to the United States, China lacks the medical expertise, technology, and research in dealing with cancer treatment and prevention. It’s hard to gauge the number of medical institutions in China that can treat cancer.

The CCP’s hypocritical propaganda continues to promote what Chinese leader Xi Jinping emphasized in May 2020: “Without health, there will be no general prosperity for the nation.” But the cost of drugs and medications are still high, despite the CCP’s announcement in 2015 with regards to reducing drug prices—this goal is part of the current medical reform in 2021, which means that the problem continues to this day.

While China’s propaganda machines hyped up the CCP’s slogans—“putting people’s health as a strategic priority for development” and “promoting the construction of a healthy China in an all-round way”—the Chinese National Cancer Center reported that the five-year survival rate of cancer patients in China rose to 40.5 percent in 2020 from 30.9 percent in 2014. This figure is lower compared to other developed countries such as the United States.

The fake cancer treatments that Dr. Zhang Yu exposed is only the tip of the iceberg. The growing number of cancer patients in China could be linked to the CCP’s broken and corrupt healthcare system.