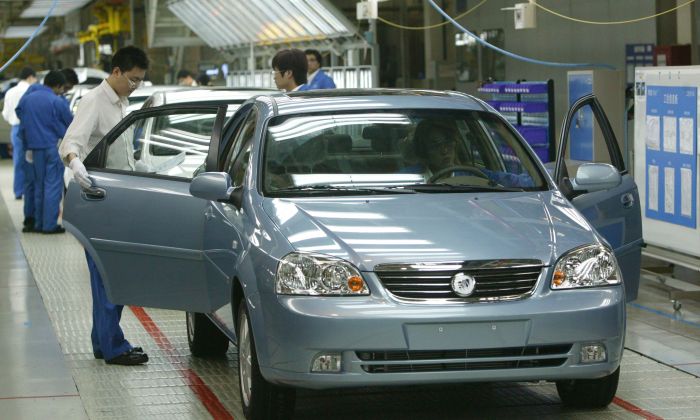 The Chinese regime plans to fully roll out its corporate social credit system in 2020, whereby all firms operating in China will be assigned a score based on government-determined parameters of “good” behavior.

All Hong Kong and Macau companies that have operations in mainland China will also be ranked.

The European Union Chamber of Commerce in China published a report on Aug. 28, warning that foreign companies may face “sanctions or even blacklisting” if they don’t follow policies and regulations set by Chinese authorities.

The Chinese Communist Party announced its plans for a nationwide social credit system in 2014, where it described its criteria for “right” and “wrong” behaviors for individuals and companies.

Individuals who engage in “untrustworthy” behavior, such as jaywalking or littering, get points docked. Those with low scores are banned from taking public transportation, booking hotels, and other restrictions.

The Chinese regime publishes a public record of individuals who engage in bad behavior, called the National Credit Information Center. The latest data shows that more than 3.5 million individuals were recorded committing more than 14 million “items” of bad behavior.

For companies, the standards are less clearly defined. One policy document explained that corporations that don’t properly treat their waste byproducts, or owe outstanding debts to banks, will have points docked.

The European Union Chamber of Commerce in China released a study on Aug. 28, based on the Chinese regime’s policy documents on the social credit system. It was conducted together with Sinolytics, a Berlin-based consultancy specializing in Chinese technology.

Authorities have begun collecting data on companies, but corporate sanctions based on the social credit system won’t be implemented until 2020.

“China’s Corporate Social Credit System is the most concerted attempt by any government to impose a self-regulating marketplace, and it could spell life or death for individual companies,” Jörg Wuttke, the chamber’s president, said in a press release.

“Businesses in China need to prepare for the consequences, to ensure that they live by the score, not die by the score,” Wuttke said.

First, “compliance challenges” would force companies to comply with Chinese market regulations, or risk an impact to their credit score.

Second is “strategic challenges,” such as having to choose the right partners and suppliers with good credit scores. A company that partners with a bad-score firm could risk impacting its own score.

According to the Chinese regime’s plan, each corporation must hand over relevant data to authorities, as well as their “customer database, evaluations of each customer, clients’ trading records, clients’ credit records,” and more.

Third is “challenges to corporate data integrity,” meaning that in handing over data to the authorities, businesses risk giving them access to sensitive data “such as technological details and personnel information.”

The report concluded that if a corporation’s credit score is low, the penalties would likely expand beyond penalty fines or court orders.

The study collected more than 50 Memoranda of Understanding (MoU) that were signed between different Chinese government agencies, including ministries, local governments, industrial regulatory commissions, and banks, which detailed how authorities determined restrictions for companies with low credit scores.

Based on those MoUs, it’s likely that companies would face sanctions such as “higher inspection rates and targeted audits, restricted issuance of government approvals (e.g. land-use rights and investment permits), exclusion from preferential policies (e.g. subsidies and tax rebates), restrictions from public procurement, as well as public blaming and shaming,” according to the report.

If a company is placed on the authorities’ blacklist, “a comprehensive list of joint sanctions applies,” according to the report.