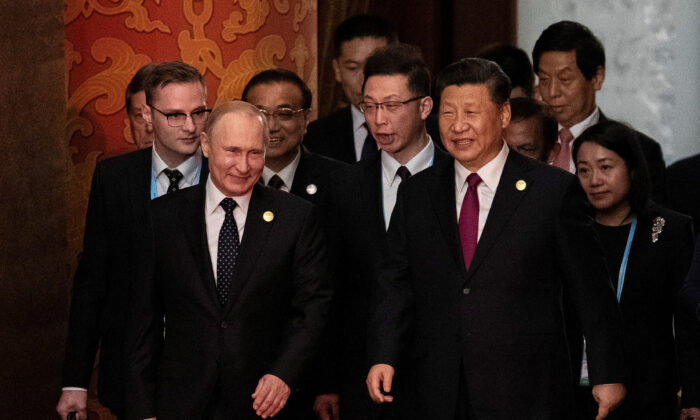 Russian President Vladimir Putin and Chinese leader Xi Jinping arrive for the welcome banquet for leaders attending the Belt and Road Forum at the Great Hall of the People in Beijing on April 26, 2019. (Nicolas Asfouri/Pool/Getty Images)
Thinking About China

Between 1972 and 2011, the United States negotiated eight nuclear arms control agreements with the Soviet Union and, after 1989, with Russia. SALT I and START I limited the number of nuclear warhead delivery vehicles each side could deploy.

SALT I also limited the number of anti-ballistic missiles each side could have, although the United States withdrew from the ABM treaty in 2002. While the proposed SALT II treaty was never ratified, both sides have generally lived within its terms.

Starting with START I and continuing with START II, the United States and the Soviet Union also moved to limit the number of warheads each side possessed. The maximum number of warheads was progressively reduced to 6,000, then to between 3,000 and 3,500 in Start II. The proposed START III agreement was anticipated to bring the number of deployed warheads down to between 2,000 and 2,500, but negotiations never occurred.

The SORT (Strategic Offensive Reductions Treaty) and New START agreements, negotiated by the Bush and Obama administrations, respectively, were intended to further reduce the number of strategic delivery systems to 700 vehicles and to reduce the number of warheads to 1,550. On Feb. 3, 2021, the Biden administration agreed to extend the New START treaty for an additional five years, until Feb. 5, 2026.

In 1987, the two countries agreed to eliminate all ground-launched, nuclear-armed, intermediate-range ballistic and cruise missiles (INF Treaty), with ranges from 300 to 3,300 miles. In addition to the United States and Russia, the former Soviet states of Belarus, Kazakhstan, Ukraine, Turkmenistan, and Uzbekistan were also parties to the INF agreement.

The Trump administration terminated U.S. participation in the INF Treaty on Feb. 2, 2019, and formally withdrew on Aug. 2, 2019, based on charges of Russian noncompliance, including cheating, as well as concerns about the buildup of Chinese intermediate-range nuclear weapons.

Specifically, critics charged that the 9M729 (NATO designation SSC-X-8 “Screwdriver”) ground-launched, intermediate-range cruise missile, which Russia began testing in 2014 and deploying in 2018, has a range of 300 to 3,400 miles. The missile could carry either conventional or nuclear warheads. Since then, Moscow has announced that it’s developing a nuclear-powered, nuclear-armed cruise missile, designated the 9M730 Burevestnik (Russian for Petrel), of virtually unlimited range.

In July 2021, U.S. President Joe Biden ordered the Pentagon to conduct a Nuclear Posture Review (NPR). The practice of commissioning NPRs began with the Clinton administration and has continued under subsequent presidents. The review takes approximately a year to carry out and is chaired by the secretary of defense. The result of the Biden administration’s NPR is expected shortly. In the interim, Team Biden has come under increasing pressure to forswear first use of nuclear weapons and to redouble efforts with Russia to further reduce nuclear arms.

China didn’t participate in the nuclear arms control negotiations conducted by the United States with the Soviet Union and later Russia. According to a report by the Federation of American Scientists, until about 10 years ago, it was estimated that China had around 200 to 250 nuclear warheads; of which 75 to 100 were on intercontinental-range ballistic missiles, half of which could reach the United States and the balance in short-range ballistic missiles slated for use as theater nuclear weapons. These missiles would primarily be deployed against targets in the Pacific and Asian regions and in particular against U.S. Naval forces in the Western Pacific, especially in the South and East China seas.

When the Trump administration withdrew from the INF Treaty, it made clear that any further treaties limiting theater nuclear weapons would have to include China as well. China, in turn, declared that it had no interest in participating in such negotiations.

Over the past several years, there has been mounting evidence that Beijing is orchestrating a significant expansion of China’s nuclear arsenal. In 2021, satellite imagery revealed that China was constructing approximately 250 new intercontinental ballistic missile (ICBM) silos in three new locations: 229 new silos in Yumen and Hami in northwestern China and another 29 new silos at Hanggin Banner in Inner Mongolia.

According to the latest Pentagon estimates, China probably has about 100 ICBMs, some of which are capable of carrying multiple independent reentry vehicles (MIRVs). The existing ICBM force is both silo-based and mobile. According to Pentagon sources, China could double its ICBM force by 2025 and could have 1,000 nuclear warheads by 2030.

Even more concerning, are recent Chinese tests of a hypersonic glide weapon. In July 2022, China put a nuclear-capable hypersonic glider into orbit that subsequently reentered the atmosphere traveling at a speed of five times the speed of sound—approximately 3,800 miles per hour—and was able to maneuver on its way to its designated target. Russia has tested a similar reentry vehicle, the Avangard. The U.S. program is still in its testing phase and is designed for conventional warheads.

Their name notwithstanding, hypersonic glide vehicles don’t travel significantly faster than a conventional ICBM. The threat they pose is that they’re far more maneuverable and better able to evade ballistic missile defense systems. Essentially, they combine the speed of ballistic missiles with the maneuverability of cruise missiles.

By first going into low earth orbit and reentering the atmosphere, hypersonic gliders could attack from any trajectory. Most U.S. ballistic missile defense systems assume that a missile attack on the United States would come from the north, over the North Pole, and are oriented accordingly.

Russia and China haven’t signed a formal defense alliance, and they’re unlikely to do so. Nonetheless, their foreign and military policies are demonstrating a growing degree of coordination and cooperation.

In 2018, China participated in Russia’s annual defense exercise. In 2019, they carried out joint bomber patrols near Japan and the Korean Peninsula. Later that year, their two navies held joint drills in the Sea of Japan. Since then, the pace of joint military exercises has continued to increase.

In August 2021, for example, Russian and Chinese troops conducted joint exercises in Ningxia, China, under a joint Russian–Chinese command and control structure. The exercise involved more than 13,000 troops, thousands of vehicles, and hundreds of aircraft and mobile artillery. In October 2021, the two countries carried out joint naval drills of Russia’s Pacific coastline.

According to a report in The Wall Street Journal, Russian President Vladimir Putin has confirmed that Russia is assisting China with an anti-missile early warning system and that the two countries are collaborating on an advanced submarine design.

In turn, China has become Russia’s primary supplier of advanced computer chips, following the imposition of economic sanctions on Moscow for its seizure of Crimea. In October 2021, Russian Foreign Minister Sergei Lavrov announced, after years of careful neutrality on the topic, that “Taiwan was part of China.”

Space has become another area of burgeoning cooperation—some of it with military ramifications—between Russia and China. In 2019, China National Space Administration (CNSA) and Roscosmos, the Russian Space Agency, announced that they would coordinate the lunar missions of Chang’e and Luna-Resurs-1.

Russia’s space technology is increasingly obsolete, and Moscow has been turning to Beijing for assistance in its modernization. The two countries are jointly working together to develop new heavy rocket technology. They’re also cooperating in the development of anti-satellite weapons, even though such weapons threaten each other’s satellite networks.

The Chinese BeiDou and Russian Glonass are highly complementary and together form a system with 59 satellites capable of competing with the U.S. Global Position System (GPS).

There are plenty of points of contention between Moscow and Beijing. Russia is a major arms supplier to both India and Vietnam, two countries that are increasingly at odds with China. Beijing’s efforts to expand its influence in Central Asia and to draw those countries into its economic orbit run counter to Moscow’s political and economic objectives in the region. Nonetheless, the United States can’t discount the possibility that Russian military moves in the Baltic republics or Ukraine could be coordinated by comparable Chinese actions in the South China Sea or against Taiwan.

The Future of Arms Control Agreements

The evolution of hypersonic reentry vehicles will erode the capabilities of anti-missile defense systems at a time when the breadth of the nuclear arsenal faced by the United States is greater than it has been in a generation.

Although Beijing and Moscow aren’t formally allied to one another, they’re both trying to increase their leverage against the United States by emphasizing their willingness to cooperate militarily and to support each other politically and economically. It isn’t clear if this cooperation will rise to the level of coordinating military actions, but it very well could.

From the standpoint of nuclear arms control, Washington will increasingly have to weigh the dilemma that nuclear parity with Russia and China would put it at a distinct disadvantage if those two countries were to act in tandem, however unlikely that scenario may appear to be at the moment.