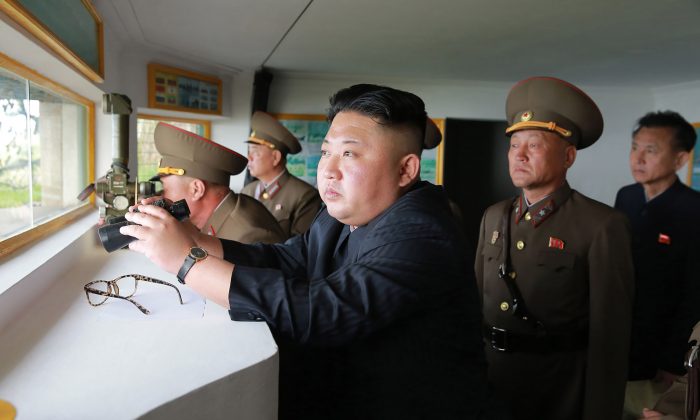 The North Korean regime is continuing its development of nuclear weapons and ballistic missiles, as well as its threats against the United States and U.S. allies. President Donald Trump said that the problem is at a point “where it’s very, very far advanced,” and that “we can’t let this go on.”

Trump gave his comments during an Oct. 11 interview with Sean Hannity on Fox News, noting that the problem with North Korea “should have been handled 25 years ago,” but was allowed to continue under previous administrations. With North Korea now claiming it is on the brink of developing nuclear missiles that could reach the United States, “something has to be done,” Trump said.

While the U.S. military is prepared to defend itself and its allies from North Korea, the current strategy is based on diplomacy—not with North Korea directly, but rather through its main supporter, China.

Defense Secretary Gen. Jim Mattis said during an Oct. 3 hearing of the Senate Armed Services Committee that Trump has been clear that “we would pursue the diplomatic effort to include with the various initiatives with China, and to ensure that we pushed on sanctions—economic sanctions—designed to keep this within a diplomatic framework for moving forward.”

And so far, the strategy appears to be working.

White House press secretary Sarah Sanders noted during an Oct. 10 press briefing that Trump has gotten more than 20 nations to “significantly reduce economic and diplomatic ties with North Korea, further isolating them,” and has “gotten China and Russia to sign on to the toughest U.N. sanctions against North Korea ever.”

The U.N. Security Council passed two rounds of sanctions on North Korea, which China agreed to pass. On Aug. 14, the Chinese leadership announced it would support U.N. sanctions that prevent exports from North Korea including iron, lead, and coal. The second round, passed on Sept. 11, also included oil restrictions.

The effects of this were soon apparent.

Then, the People’s Bank gave North Korean joint ventures and companies 120 days to close down. The news was reported by The Korea Herald on Sept. 28, which cited the Chinese regime’s Commerce Ministry.

The Chinese regime is one of North Korea’s main defenders and a key supplier of goods and oil. According to energy news website Oilprice.com, close to 90 percent of North Korea’s documented crude oil supply comes from China. This relationship has been unstable recently, however.

Jiang’s faction has opposed current Chinese leader Xi Jinping, and relations between China and North Korea have been caught up in the factional infighting.

Xi has had relatively cold relations with North Korea. And it is Xi’s faction that has agreed to enforce the U.N. sanctions.

The sanctions, meanwhile, appear to be taking their toll. North Korean state media admitted on Sept. 29 that the sanctions are causing a “colossal amount of damage.” The state news story also threatened the United States with extinction.

Tillerson had similar reports after visiting China, and said during a joint press conference with U.S. Ambassador to China Terry Branstad on Sept. 30 that “the Chinese are also telling us that it’s having an effect, and they have a pretty close-up view of it.”

Trump acknowledged China’s role during his recent interview on Sean Hannity, yet maintained cautious optimism. “Now China’s been very helpful, I think,” he said. “I think. Who knows? They seem to be very helpful.

“They cut off banking to North Korea. That’s something they have never done before. They have cut way down on the fuel, a lot of other things. We’re going to see what happens,” he said, adding that in regard to North Korea’s nuclear programs, “We can’t allow this to happen. This should have been taken care of long ago.”