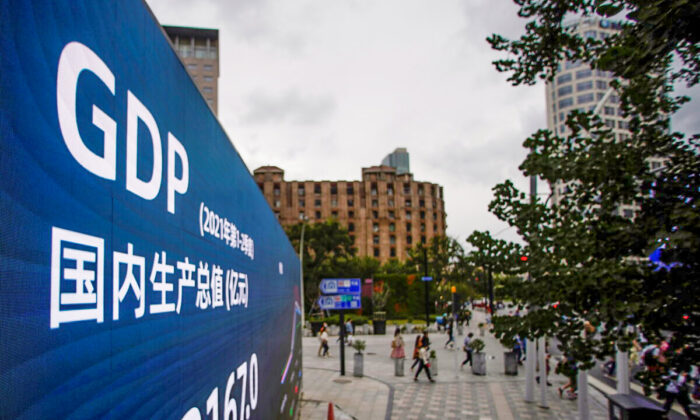 An electronic display showing the China GDP indexes is seen on a street in Shanghai, China, on October 16, 2021. (Reuters/Aly Song)
China Business & Economy

The People’s Bank of China (PBoC) released the “February 2022 Financial Statistics Report” on March 11, showing that China’s consumption continued to decline in February. Loans in February decreased by 125.8 billion yuan (about $20.1 billion) year-on-year, of which medium- and long-term loans to residents declined for the first time in the past 15 years.

Hong Kong financial analyst Katherine Jiang told The Epoch Times on March 14 that although the February data could have been affected by seasonality, the simultaneous reduction in short-term and long-term loans, coupled with weak consumption, reflects a lack of consumer confidence.

The growth rate of Chinese consumption in 2021 is significantly lower than it was before the COVID-19 epidemic. The per capita consumption expenditure of Chinese residents in 2021 was 24,100 yuan (about $3,856), a two-year average real growth of 4.0 percent after deducting price factors, and lower than the real growth of 5.5 percent in the same period in 2019 and 6.2 percent in 2018.

Growth in per capita disposable income for Chinese residents also fell in 2021. After deducting the price factor, two-year average real growth of 5.1 percent is  down from the 5.8 percent real growth in the same period in 2019 and 6.5 percent in 2018.

In February Li Songjun, a Ph.D. in economics who has been concerned about China’s economy for a long time, told The Epoch Times her views on the decline in China’s consumption growth in 2021.

“China is under great pressure to maintain economic growth this year. Recently, the International Monetary Fund, the World Bank, and other institutions have lowered their growth forecasts for China. Among the troika driving GDP growth, weak consumption is the biggest drag factor,” she said.

Under the downward trend, “promoting consumption” has become a buzzword in China, frequently used at Chinese Communist Party (CCP) meetings and in documents. The CCP Politburo meeting in December 2021 once again looked at consumption and called for the expansion of domestic demand and the continuous recovery of consumption. On January 14, the National Development and Reform Commission issued the “Notice on Doing a Good Job in Promoting Consumption in the Near Future.” On January 25, the director of the General Affairs Department of the Ministry of Commerce of the CCP stated at a press conference that the Ministry of Commerce will promote the recovery of consumption in 2022 and expand to a high level of opening up.

According to the “Q4 2021 Urban Depositors Questionnaire Survey Report” released by Bank of China on Dec. 31, 2021, more residents choose to save, and fewer choose to consume and invest. China’s resident deposits still increased year-on-year until February, when the year-on-year increase turned negative.

GDP is an important indicator of a country’s economic status and development level. If the expenditure method is used to calculate GDP, the calculation includes investment (gross capital formation), consumption (final consumption), and net exports (net exports of goods and services), commonly known as the “troika” that drives national economic growth.

On Jan. 25, Chinese economist Yu Yongding published “Fourteen Points of View on Macroeconomics in 2022” (hereinafter referred to as “Views”) on the WeChat public account of the “China Financial Forty Forum.” The first point was to call for a more objective and accurate view of China’s 2021 GDP growth rate of 8.1 percent. The “Views” said that year-on-year GDP growth will involve the base number, and the chain growth will not directly involve the base number. Therefore, the comparison of the chain growth rate of GDP in 2019 and 2021 can reflect the real situation of China’s economic development in 2021.

Therefore, the “Views” said that “If the cardinality effect is deducted, the economy in 2021 operated at a level lower than the 6 percent in 2019;”  “Under the assumption that there was no epidemic and growth in 2020 was normal, the GDP growth rate in 2021 may be lower than 5 percent.”

According to the official data released by the CCP, from 2003 to 2011 the average annual growth rate of China’s GDP was 10.7 percent, and the year-on-year growth rate in 2007 was even as high as 14.2 percent. When China’s verified GDP growth rate fell to 7.7 percent in 2012, that is, below 8 percent, China Economic Net said in January 2013: According to previous data, “when China’s GDP growth rate is lower than 8 percent, it is thought that large-scale unemployment will occur,” so “guarantee 8” is a red line for China’s economic growth.

As far as “high quality” is concerned, the “Views” said that “in theory, there is no question of quality between GDPs,” because at the macroeconomic level, all GDPs are assumed to be homogeneous. Otherwise, for one country the GDP of different periods and different countries in the same period cannot be compared. In any case, the economy still has to pursue growth. “Growth is not everything, but without growth there is nothing.”

Jiang Tianming said that the base of the U.S. GDP is large, and the total GDP in 2020 is about $20.9 trillion, which is nearly 30 percent higher than China’s final GDP of 101,356.7 billion yuan (about $16.2 trillion) in the same period. Therefore, to obtain the same increase in GDP, the absolute increase that the United States needs is larger and more difficult to attain.

She said that in the troika driving the economy, U.S. consumption was strong, while Chinese consumption was weak. After the COVID-19 outbreak, the U.S. government sent money directly to the people, which greatly boosted the income of residents, supported U.S. consumption, and then promoted the recovery of the U.S. economy. Although this direct payment model also has certain drawbacks, it at least reflects the people-oriented attitude of Western countries and concern for people’s livelihoods. The CCP, on the other hand, has followed its usual practice of investing in infrastructure, accumulating high debt, and taking financial risks, while the year-on-year growth rate of total retail sales of consumer goods in China declined significantly after March 2021.