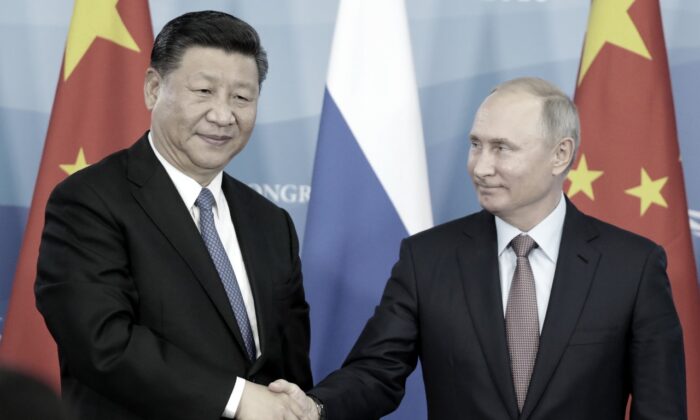 Beijing is trying to play a clever game by supporting Russia’s war in Ukraine while balancing its actions and rhetoric, in light of the West’s surprisingly strong reaction to the invasion.

Make no mistake about it, although progress has been slower than anticipated, barring any unforeseen developments, Russia will prevail in this conflict with Ukraine. Furthermore, Beijing will not condemn its Russian partner after describing the partnership between the two nations as “rock solid.”

Beijing is, therefore, attempting to maintain credibility in the West, where its economic interests are enormous, and with its expansive and forward-looking alliance with Russia.

That said, Beijing’s support for Moscow is complex, with a blend of advantages and disadvantages.

For example, Beijing wants to minimize the economic impact of the sanctions on Russia, and yet will not go as far as sacrifice its own economic interests to help Moscow weather the sanctions. That’s understandable. With its diminishing foreign currency reserves and shrinking markets in Europe, China itself is becoming more economically vulnerable.

Furthermore, no matter how much it tries to play both sides, Beijing has lost much of its goodwill with Europe and the West through its toxic trade policies, rampant technological theft, as well as its support of Russia’s invasion.

No one seriously believes Beijing’s assertions that it wants peaceful coexistence or to move beyond a “Cold War mentality” as it fully supports an unprovoked war in Ukraine. The Chinese Communist Party’s (CCP) objective is to replace America and rule the world, and everybody knows it.

At the same time, the invasion has driven Russia deeper into China’s arms. That shouldn’t surprise anyone, least of all either nations. They formed their alliance well before the invasion and likely planned it together as a pushback against U.S. power.

But now that it’s under extensive economic sanctions from the West, Russia needs China more than ever. More than 300 Western corporations have withdrawn from Russia in the past two weeks—from airlines to fast food, to internet firms—crushing the Russian economy.

For example, Moscow is relying upon China’s telecom giant Huawei to fill the digital isolation gap left by Western internet service providers. Russia has virtually nowhere else to turn for internet service and other necessary digital capabilities.

In a geopolitical context, the outcome in Ukraine could go a few different ways. A destabilized Europe with strained U.S.-relations and diminished U.S. influence, for example, could be a big win for both Beijing and Russia. It could render NATO irrelevant if non-existent.

If, however, NATO somehow grows stronger and helps Ukraine to repel Russia, it could quickly expand the war. Indeed, Russian President Vladimir Putin may already be doing so with up to 16,000 Syrian fighters on their way to Ukraine. But if Ukraine somehow remains independent, it would lead to further losses for both Beijing and Moscow in terms of European market access and influence around the world.

Such an outcome may well depend on Europe’s desire or capability to push back against Moscow and the ability of the United States to strengthen the Atlantic relationship rather than looking weak on the world stage.

A third and very favorable outcome would be for Russia to consolidate its gains in Crimea, establish client states in Luhansk and Donetsk, and enforce neutrality of what’s left of Ukraine. This would give Russia a big win without triggering a wider conflict and NATO a way out.

Advantages Accrue to Both Moscow and Beijing

One advantage that the invasion does give China, however, is insight into how Beijing may prepare for, or even avoid, the problems that Russia is dealing with, should the Chinese regime invade Taiwan. The extent of that advantage is not clear, however.

Another advantage is the fact that trade between the two has skyrocketed by almost 40 percent over last year, to about $147 billion. It’s a crucial, mutually beneficial relationship. As the world’s largest importer of food, China needs Russian food and its resources. Recent trade deals include China importing Russian oil, gas, coal, and grain. As the world’s largest wheat exporter, it’s more critical for Russia more than ever.

Conversely, Russia needs China’s financial assistance, as well as its high-tech expertise and consumer products. For example, China’s UnionPay payment system, which competes with Mastercard and Visa, is being adopted by Russia.

At the same time, the Russia-China axis is strategic in scope, intended to challenge the current liberal order led by the United States in Europe and in the Asia Pacific region, both militarily and economically. China’s cross-border interbank payment system (CIPS) is designed to replace the SWIFT system. This would provide immunity to U.S. financial sanctions. Other nations wishing to avoid U.S. control over their economies will welcome an alternative to SWIFT, as well.

As noted earlier, on the one hand, China is trying to balance its relationships with the current global leaders, and on the other hand, leverage its partnership with Russia. Some view Russia as the more powerful part of the alliance, but Russia’s aggression belies its desperation, not its superiority.

One key point with regard to the power relationship is to consider in the China-Russia alliance is where the interests of each partner lie, both in the short and long terms.

In the long term, Russia wants to dominate Europe, while China wants to push the United States out of the Asia-Pacific region as well as dominate Europe. That would include, by the way, Russia.

In the meantime, both nations face some similar challenges.

For example, at the macro level, both are facing stiff economic challenges. China desperately needs to shift its economy from debt-based real estate development to domestic consumption. Russia’s economic implosion is vastly more dramatic and makes it the weaker of the two.

At the micro level, both governments essentially rule their respective countries via dictatorship.

Perhaps not so coincidentally, both have grown more isolated on the world stage. As noted in an earlier post, Chinese leader Xi Jinping hasn’t left Beijing in over two years. He may well be facing internal challenges within the CCP. Meanwhile, Putin is holed up in a mountain bunker.

As in all wars, there are outcomes both anticipated and unexpected. But ultimately, it appears that China—not Russia—has the most to gain and to lose from the war in Ukraine.