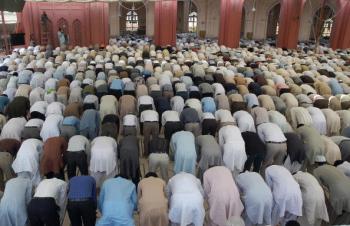 Neil Campbell
View profile
Follow
biggersmaller
Print
While the start of this week marked the beginning of the month of Ramadan for Xinjiang’s Uighur Muslims, China’s Communist authorities are reportedly cracking down on Muslim religious activity.

The Web site for the town of Yingmaili currently lists nine rules put in place to control the Muslim holy month in the name of “maintaining stability during Ramadan.”

The list includes barring teachers and students from observing Ramadan, requiring men to shave their beards, forcing women to take off their veil’s, prohibiting mosques from letting people from outside the town stay the night, forbidding retired government officials from entering mosques, and requiring restaurants to maintain normal hours of operation.

During Ramadan, Muslim restaurants normally close during day time hours for their religious fasting, known as swam, which takes place from sunrise to sunset. Muslims who are observing Ramadan typically eat large meals at night.

Currently, as many as a dozen Muslim restaurants in the area had their business licenses revoked for closing up shop during the Muslim holy month.

This year, China’s Communist regime forced owners of Halal Food Industry to sign a guarantee to continue to operate during Ramadan. Any closure during this period is considered illegal.

Spokesman for the World Uighur Congress, Dillxiati, told Sound of Hope Radio that the Chinese government has set up surveillance teams in areas such as all mining industries and enterprises, villages and schools to monitor and track the region’s Uighur’s in order to restrict their activities during Ramadan.

Moreover, the Chinese Communist Party (CCP) is providing free lunches to teachers and students in all major institutions and schools in an effort to smoke out anyone who is engaged in Ramadan activities. If anyone refuses lunch it will become evident that they are engaged in fasting and will be punished by school authorities and may even face expulsion.

According to Dilixiati, all religious activities, cultural traditions and traditional dress of the Uighur’s are also being prohibited while all religious publications have been confiscated and shut down by the regime.

It would appear the CCP is using the recent violence in the area that took place during the Olympic Games as an excuse for the suppression, "Faced with recent violent and disruptive activities by religious extremists, separatists and terrorists, we must… step up ideological education of religious leaders and followers," stated a notice on Xinjiang’s Zhaosu County website.

A notice on the Xinhe County website echoed a similar sentiment, "We must timely warn and stop religious believers from organizing and planning large scale prayer groups and prevent any large crowd incidents that could harm social stability."

Dilixiati suspects the intention of the CCP is to eliminate Uighur’s beliefs because they think that the Uighur faith is impeding the CCP’s assimilation of the ethnic group to the Communist ideology.