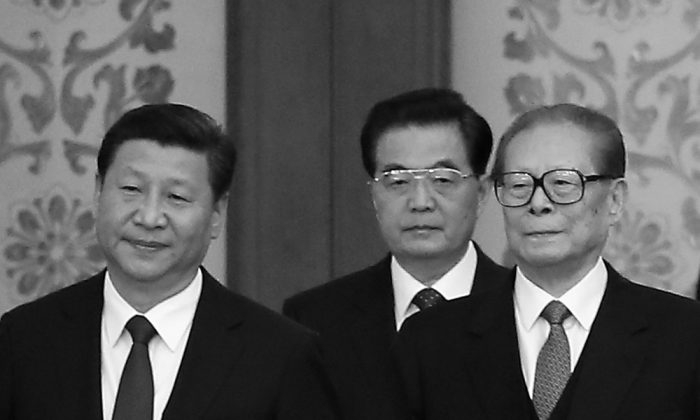 Chinese President Xi Jinping and his predecessors Hu Jintao and Jiang Zemin arrive for the National Day reception marking the 65th anniversary of the founding of the People's Republic of China at The Great Hall Of The People on September 30, 2014 in Beijing, China. (Feng Li/Getty Images)
China

But in the last year and a half, members of the so-called “Red Nobility” have made very public statements in support of one issue—Chinese leader Xi Jinping’s anti-corruption campaign.

At a gathering of revolutionary children in February 2014, Hu Muying, the daughter of Party propagandist Hu Qiaomu, praised Xi for “taking substantial actions” to weed out ‘tigers and flies’—official terminology for corrupt officials—and the “malignant trends pervading” the Party. Hu again lauded the anti-corruption effort this Lunar New Year.

Days after the sacking of the late general Xu Caihou in June last year, Dai Qing, the daughter of former Chinese marshal Ye Jianying, told broadcaster Voice of America (VOA) that Xu was able to sell military positions because former leader Jiang Zemin was pulling the political strings during his successor Hu Jintao’s time in office.

And Chen Weili, daughter of Chen Yun, an influential Party elder who backed Jiang to succeed Party paramount Deng Xiaoping, said in June that everyone should “absolutely support the current anti-corruption campaign” and the power of corrupt Party officials “must be checked.”

By backing Xi’s purge of the Party apparatus, the princelings are in fact taking aim at the man behind the political network being dismantled—Jiang Zemin.

Since Jiang came to power with the support of Party elders, why and how did estrange himself from the children of his patrons?

In the 1980s, Deng Xiaoping’s regime ruled that Jiang Zemin, Hu Jintao, and the generation of Party officials who weren’t descended from the revolutionary generation would be caretakers of the Party because the Red Nobility was still relatively young: Bo Xilai, Xi Jinping, and Liu Yuan were in their 30s, and lacked experience.

The princelings always felt that the keys to the regime was their dynastic birthright through “royal succession.” Jiang even promised Deng that his generation of “civilian elites” would hand leadership back to the princelings at an appropriate time.

But Jiang never ceded power, possibly out of fear that he would be marginalized if his shady past was exposed. Jiang claims revolutionary lineage because he is the adopted son of his uncle, Communist Party martyr Jiang Shangqing; though Jiang’s biological father, Jiang Shijun, in fact worked for the Japanese during their occupation of China.

Jiang actively blocked countless princelings from getting too powerful.

For instance, former military leader Chen Geng’s son, Chen Zhijian, was noted for being harassed by Jiang’s cronies in the army.

Chen was asked to pay for his promotion as a commander and to retire a lieutenant-general—acts the Red Nobility considered insulting.

Gao Xin, a writer on Chinese politics, noted that capable princelings in the regime’s bureaucracy often found themselves in “awkward” situations, and Jiang often overlooked them for promotion.

The case of Ji Pengfei, a formerly a powerful diplomat and intelligence chief in the foreign affairs department, and his son Ji Shengde, formerly a senior member of the People’s Liberation Army intelligence, is a typical example.

Ji Shengde was said to have mocked Jiang for not having fired a gun while he headed the Central Military Commission, a Party body that oversees the military.

Jiang bore a grudge against the younger Ji, and later got his revenge by implicating him in a high-profile smuggling scandal in 1999 and having him sentenced to death.

Ji Pengfei wrote to Jiang four times to appeal for clemency but was rejected. Driven to despair, the elder Ji is thought to have committed suicide through an overdose of sleeping pills in February, 2000. The younger Ji’s death sentence was eventually commuted to 20 years in prison.

Before he was purged in 2013, former Chongqing boss Bo Xilai, son of revolutionary leader Bo Yibo, was a rapidly rising star who was at one point seriously considered for and backed by Jiang to take China’s pinnacle political position.

Li Weidong, the former director of the China Reform journal, wrote in the Hong Kong political magazine Front Line: “The present political situation is the result of Jiang’s machinations in 1989. It is the Jiang faction who is to be blamed for crony capitalism, Party polarization, and societal turmoil. They have driven the red empire to the brink of collapse.”

The Red Nobility, Li added, have their backs against the wall, and they wish to settle the score with Jiang Zemin. With the recent statements by top princelings, the consensus seems clear: rally behind Xi Jinping.