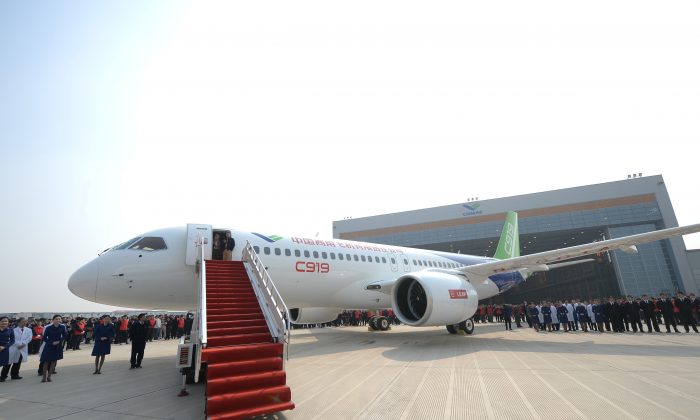 China's self-developed passenger jetliner Comac C919 is presented to the public on Nov. 2, 2015 in Shanghai. (VCG/VCG via Getty Images)
China

China’s first homegrown jet airliner recently completed a $2 billion deal, giving the country a foothold in a lucrative global market with one of the highest barriers of entry.

The Commercial Aircraft Corporation of China Ltd. (Comac) last week signed an order to sell up to 60 of its ARJ21-700 regional jets to China Aircraft Leasing Group (CALC) in a deal valued at up to $2.3 billion.

The deal, signed during the annual U.K. Farnborough International Airshow, was the biggest single order for Comac’s jets.

The regional jets will be delivered over a span of five years, and CALC will lease the planes to an undisclosed Indonesian airline, in which CALC’s investor, Friedman Pacific Asset Management Ltd., plans to invest. The ARJ21 will be the first Chinese-made jet to enter service abroad. CALC currently has more than a hundred planes in its fleet, most from established aircraft manufacturers Airbus SAS and Boeing Co.

After a ten-year delay due to technical problems, the ARJ21 finally took its maiden flight last month on launch customer Chengdu Airlines, making it the first Chinese-developed jet to enter into commercial service. The plane can carry up to 90 passengers, and is set to compete with regional jets from established leaders such as Brazil’s Embraer SA and Canada’s Bombardier Inc.

The state-owned company also has another jet under development, the C919, which is a larger long-range airliner aimed to compete against Boeing 737 and Airbus A320. The C919, likewise, has been delayed.

Comac’s ARJ21 is part of an effort by China to develop a homegrown civil aircraft industry and establish a foothold in the $3 trillion global narrow-body jet aircraft market. In its latest annual forecast, Boeing estimated global demand will reach almost 40,000 new jets over the next 20 years, most of which are of the single-aisle narrow-body type similar to ones under development by Comac.

Beijing has long eyed the global duopoly of Boeing and Airbus with envy. Almost all of its domestic airlines operate planes from the two manufacturers. According to the China Daily, a state-owned newspaper, China plans to wrest 5 percent of the domestic market away from Boeing and Airbus by 2020.

Before the ARJ21, the only production Chinese airliner was the Xian Y-7 produced during the 1970s and 1980s. The Y-7 was a direct copy of Russian Antonov An-24 whose technologies date back to the Korean War. The Y-7 revamp, MA60, had a dangerous track record.

Today, China’s ambitions in the global commercial airliner market rest entirely on the wings of the ARJ21 and the C919. But as Comac readies its global introduction, it cannot escape suggestions that the ARJ21’s development has been assisted by Beijing’s history of reverse engineering and corporate espionage.

Unlike other industries such as automobiles and trains where Chinese companies receive government-mandated technology transfer from their foreign joint-venture partners, China received no foreign help in aviation, which is considered a far more militarily sensitive market.

According to industry journal Aviation Week, initial design of the ARJ21 was based on that of the McDonnell Douglas MD-80 produced locally at Shanghai facilities of the Aviation Industry Corporation of China (AVIC), which later transferred the factory to Comac.

The ARJ21 took 14 years to develop, a period beset by multiple delays stemming from wing design issues, management and logistical inexperience, and bugs related to its avionics. During development of both the ARJ21 and the C919, Comac officials worried the constant setbacks would allow foreign competitors such as Boeing and Embraer to release more advanced and efficient aircraft that would make Comac’s planes obsolete upon arrival.

The delays required extensive rework which would have been difficult for any manufacturer, let alone an inexperienced company on its virgin product. Regarding Comac’s difficulties, “Chinese manufacturers have no experience of building such commercial aircraft and they have to look for new solutions to every problem they meet,” said Li Xiaojin, professor at Civil Aviation University of China, according to a 2014 report on Chinese corporate espionage by the Institute for Strategic, Political, Security and Economic Consultancy in Berlin.

Comac’s circumstances and difficulties marks it as a prime candidate to receive any technology know-how and design schemes obtained by Beijing’s state-sanctioned corporate espionage. Stealing foreign technology for Chinese economic gains has long been investigated and documented by Epoch Times.

Cases of Chinese espionage against foreign aerospace and defense companies are numerous. In March, Chinese-Canadian Su Bin directed Chinese hackers to steal more than 630,000 documents from Boeing related to development of the C-17 transport aircraft, the F-35 and F-22 jets, and other planes.

For now, the ARJ21 has not yet received U.S. aviation authorities’ endorsement, which limits its current market to state-owned Chinese domestic airlines and aircraft lease companies. But if Comac airplanes prove to be capable, reliable, inexpensive, and above all safe, Boeing and Airbus may have reasons to worry.