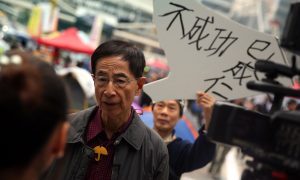 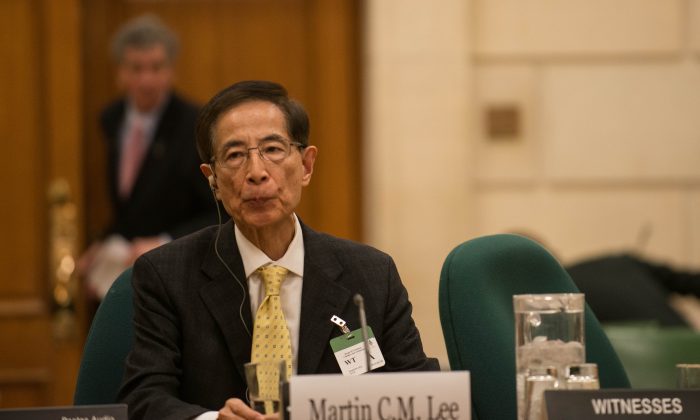 It’s insulting to think that we can’t comprehend and understand the issue.
— Conservative MP Peter Goldring

“I wasn’t thinking that it was that high of a priority to have in front of this meeting, but obviously from the sounds of it, it certainly should be brought up to the forefront.”

Goldring said he hopes the MPs might be able to create some leverage by looking into it further or directing the human rights subcommittee to study the situation in Hong Kong in-depth.

For many MPs, the letter had the opposite effect than the embassy intended, he said.

“In consideration of the sensitive and complicated situation in Hong Kong, we hope that the Canadian side will not hold such a hearing, not intervene in Hong Kong’s internal affairs in any form, so as not to send wrong signals to the outside world and cause any disturbance to China-Canada relations.”

“That’s pretty heavy-handed. That’s insulting,” he said. “Because the issue is ‘sensitive’ and ‘complicated’ we’re not to discuss it? It’s insulting to think that we can’t comprehend and understand the issue.”

“This is just a heavy-handed, clumsy diplomacy,” he adds.

Testifying as planned on March 10, Lee told the committee that a new generation of Hong Kongers had become passionate about democracy in the island city.

These young people have got in their hearts, each of them, the fire of democracy burning.
— Former Hong Kong legislator Martin Lee

Tens of thousands of students took to the streets there last year during a three-month protest in the core financial district that was dubbed Occupy Central or the Umbrella Movement. They were protesting a move by Beijing last August that allows Hongkongers to elect the city’s leader, but only from two or three candidates handpicked by a pro-Beijing nominating committee.

“These young people, having been baptized into democracy, have got in their hearts, each of them, the fire of democracy burning, and no iron fist is going to quench that fire in the future. So that gives me great hope,” he said.

The students have now returned to university, but protests could begin anew should the Chinese regime announce—as they are expected to do in the coming months—the actual election regulations.

Canada has a moral obligation to speak out on the issues in Hong Kong, said Lee, because Canada endorsed the 1984 joint declaration by the Chinese regime and Britain that paved the way for Hong Kong to be handed back to Chinese control.

That declaration guaranteed that Hong Kong would not be subject to China’s socialist system. It also stipulated that the Hong Kong Basic Law (which functions as Hong Kong’s constitution of sorts) would spell out the details of how the city would be governed.

“The Canadian government, having been lobbied successfully by China to support the joint declaration, certainly owes a moral obligation to the Hong Kong people when things are going wrong. You cannot be accused of interfering in China’s internal affairs, because China had lobbied for international support,” Lee said.

Section 26 of the Basic Law stipulates that any Hong Kong permanent resident could contest elections and vote. This is one of the provisions Beijing is preparing to quash.

China is at a potential turning point, said Lee. Current leader Xi Jinping has amassed great power having overcome his political opponents. That means Xi can steer China how he sees fit.

Two paths lie ahead and now Xi gets to choose. One is a path of reform that sees China take strides toward rule of law and democracy. The other is more of the same, with Xi styling himself an emperor and maintaining the regime’s autocracy.

Lee said it was in Canada’s interests to push Xi towards real reform.

“China is now the world’s second largest economy, but how do you sustain it without a corresponding political structure? How can you? After killing all the corrupt tigers, what do you do next? How do you keep the country free of corruption? You’ve got to have a system.”

Lee was joined by Gloria Fung with the group Canada-Hong Kong Link. She said Canada has not only a moral reason to back Hong Kong, but also an economic one.

“Hong Kong is Asia’s most Canadian city with 300,000 Canadians and over 200 Canadian companies based there,” she said.

“Without the rule of law, freedom, and civil liberties, there won’t be any guarantee of a level playing field for Canadian-owned businesses or personal security for Canadians in Hong Kong.”

Hong Kong currently elects a third of its legislature, with the chief executive appointed by Beijing.

Speaking to reporters after the hearing, Lee said standing up for Canadian interests is the best way to win respect from the Chinese regime.

“Too many governments think that if they want to do business in China, they mustn’t antagonize China and speak about these controversial and sensitive issues.

“In fact, my experience tells me that this is wrong. Once the Chinese government thinks that a particular government is already in its pocket, then they can just treat this government with disrespect,” he explained.