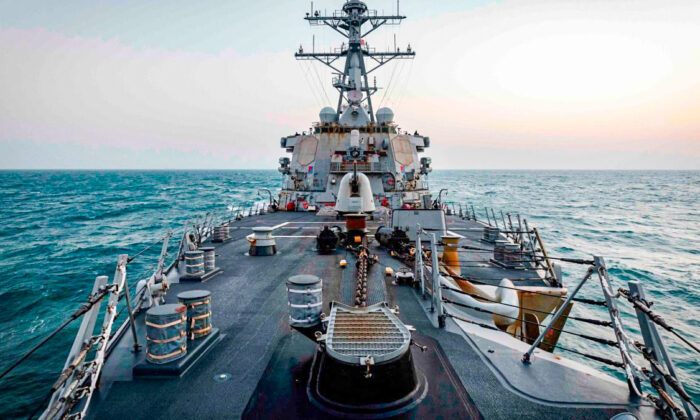 The Chinese communist regime claimed sovereignty over the Taiwan Strait on June 13, denying the United States’ and Taiwan’s assertion that the strategic channel is in international waters.

Bejing’s statement was immediately rejected by the United States and Taiwan.

The Taiwan Strait separates the island of Taiwan, which is the only remaining territory from the Republic of China (1911- present), and mainland China, which was taken over by the Chinese Communist Party (CCP) in 1949. U.S. naval vessels have regularly traveled through the strait, as it’s considered part of international waters.

The regime’s Foreign Ministry spokesman Wang Wenbin said at a regular news briefing in Beijing on Monday, “China enjoys sovereign rights and jurisdiction over the Taiwan Strait, while respecting the legitimate rights of other countries in the relevant maritime areas.”

Wang also cited the United Nations Convention on the Law of the Sea (UNCLOS) and domestic law to claim that the Taiwan Strait is within China’s water territory and exclusive economic zone.

The United States is not a signatory to UNCLOS.

He reiterated U.S. concerns about China’s “aggressive rhetoric and coercive activity regarding Taiwan” and emphasized the United States “would continue to fly, sail, and operate wherever international law allows, and that includes transiting through the Taiwan Strait.”

Taiwan Premier Su Tseng-chang said on June 15 that the strait was by “no means China’s inland sea.”

“China’s ambition to swallow up Taiwan has never stopped or been concealed; the Taiwan Strait is a maritime area for free international navigation,” he said.

Taiwan’s Mainland Affairs Council said in a written statement on June 14 that China’s claim is an attempt to “internalize Taiwan and internalize the strait,” which is a violation of international law. “This is a provocative move that undermines the status quo across the Taiwan Strait and further escalates regional tensions, which we and the international community neither recognize nor accept.”

Alexander Huang, director of the International Department of the opposition party Kuomintang and an associate professor of the Strategy Institute of Tamkang University in Taiwan, said, “The Taiwan Strait is an important international waterway, and Taiwan will not accept China’s claim.”

Japan’s maritime transportation relies heavily on the Taiwan Strait and the South China Sea. Regarding China’s claim, a Japanese government spokesman said on June 14, “The peace and stability in the Taiwan Strait are extremely important not only to Japan, but also to the international community.”

Beijing’s recent claim contradicts a previous statement made in 2017, when the regime’s Foreign Ministry said, “The Taiwan Strait is an international waterway shared by the mainland and Taiwan.”

The latest provocative rhetoric from the regime follows its second largest incursion into Taiwan’s air defense zone this year on May 30.

U.S. President Joe Biden said on May 23 that the United States will intervene militarily to defend Taiwan if it is attacked by CCP forces.