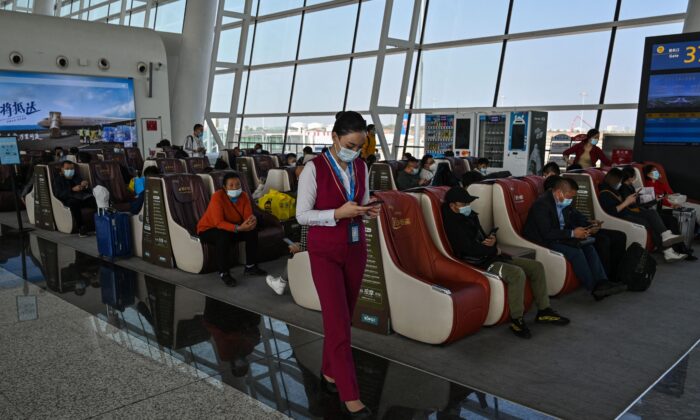 China’s airline industry has borne the full brunt of the tough COVID-zero policy. The Aviation authority said it may have lost billions since the epidemic began. The Russia-Ukraine war has also impacted flights that usually travel over Russian airspace.

“The impact of the epidemic on civil aviation in China has far exceeded expectations.” Airline transportation plummeted, and business operations continue to be under heavy pressure, said Zhang Qing, deputy director of the Development Planning Department of China’s Civil Aviation Administration at a March 18 meeting, according to China Times on March 22.

China tamped down entry and quarantine restrictions as part of its zero-clearance strategy, which resulted in a drastic reduction in the number of flights.

In 2020 China saw 272 flights canceled, which grew to 529 flight cancelations in 2021. The number of travels completed through Chinese civil aviation dropped by 37 percent and 33 percent in 2020 and 2021 respectively compared to 2019, according to data by the civil aviation authority.

The Chinese Communist Party (CCP) laid out tough anti-COVID-19 prevention and control measures targeting both internal rebound and external virus importation. For internal control, region-wide nucleic acid testing is implemented immediately when an infection is detected in a region, and people are restricted from moving freely.

For external importation risk control, the “Five Ones” measure was introduced to reduce international flights starting in March 2020, requiring each Chinese domestic airline to reserve only one route to any one country and to operate no more than one flight per week on each route, the so-called “one carrier, one country, one route, one flight per week” policy.

In addition, in June 2020, the Civil Aviation Administration of China (CAAC) implemented circuit-breaker measures on international passenger flights. The measure stipulates that if the number of infected passengers on the same route reaches five after arrival, the airline’s route must be suspended for one week; if the number of positive cases reaches 10, the airline’s route must be suspended for four weeks. After the circuit-breaker period is over, the airline is allowed to resume its one flight per week schedule.

In April 2021, CAAC escalated the circuit-breaker measures, such that if the number of infected passengers in two consecutive flights reaches 10 each, an eight-week suspension of operations is required based on previous measures.

In addition, the standard for a negative test in China is set even higher than in other countries. The cycle threshold (Ct) value for a positive PCR (polymerase chain reaction) test in China is 40. Therefore, more people may test positive in China.

However, in the run-up to the Winter Olympics, Beijing, after being pressured by the Olympic Committee, lowered the Ct to 35 or less to avoid a more stringent standard that would have prevented some athletes from competing according to Canada-based CBC on Jan. 23. Those with a PCR of less than 35 were considered positive.

Strict quarantine standards coupled with the circuit-breaker measures resulted in a large number of flight cancellations and a sharp drop in passenger traffic.

Since the Omicron variant resurfaced in China this year the CAAC has issued successive contain orders. In the first half of January, at least 140 international flights were canceled.

The CCP’s excessive zero-clearance on the epidemic has sparked discontent and countermeasures from other countries.

The United States announced on Jan. 21 that it would suspend 44 U.S. flights to China operated by China International Airlines, China Eastern Airlines, China Southern Airlines, and Xiamen Airlines in response to the CAAC’s suspension of some U.S. airlines on the grounds of epidemic prevention, the Wall Street Journal reported.

China’s “unilateral actions against the named U.S. carriers are inconsistent” with a bilateral air transportation agreement, a spokesman for the U.S. Department of Transportation said.

In July 2021, the German government also criticized the China side’s cancellation of German airline flights as a distortion of competition, so Germany will also reciprocate by canceling the flights of some Chinese airlines.

The Chinese carriers also harbored grievances against the authorities’ arbitrary cancellation of flights. Wang Yu, chairman of Spring Airlines, suggested at a civil aviation meeting on March 18 that the CAAC should urge local governments to not arbitrarily restrict flight operations in order to protect the rights of passengers and airlines.

During the meeting, Qi Qi, an associate professor of Guangzhou Civil Aviation Vocational College, mentioned that, besides reducing demand, the long-running epidemic has changed the consumer habit of buying advance tickets, while aircraft manufacturers, leasing companies, aviation fuel and materials, and other aviation service providers have not changed their procurement and settlement methods, which would lead to a lack of liquidity becoming the biggest operational problem for airlines and airports, Qi said.

After Russia invaded Ukraine many countries imposed sanctions on Russia, who then closed its airspace to 36 countries in response to the sanctions, resulting in a significant reduction in international flights on China-Europe routes, Airport Technology reposted on March 1.

According to the statistics from VariFlight, a Chinese flight travel service app, on Feb. 28, China operated 62 international flights on the China-Europe route, while on Feb. 21, before the Russia-Ukraine war, it operated 97 international flights. The number of flights operated by foreign airlines to China and Europe was reduced from 12 to 3 due to the need to bypass Russian airspace.

Except for the reduction in flights, the soaring crude oil prices brought about by the Russia-Ukraine war added to the woes of China’s civil aviation.

According to Qi, aviation oil consumption accounts for more than 95 percent of the energy consumption of the entire civil aviation industry. Global oil prices are expected to remain high due to the U.S. economic sanctions against Russia, which will increase airline operating costs. Although airlines can partially offset the impact of high fuel prices by imposing aviation fuel surcharges, sluggish market demand prevents airlines from raising fares to relieve the pressure.

Qi suggested that Chinese airlines should give priority to China-controlled aircraft leasing services, and seize the opportunity to expand amid the reorganization of the global civil aircraft leasing landscape triggered by the disposal of Russian aircraft assets.