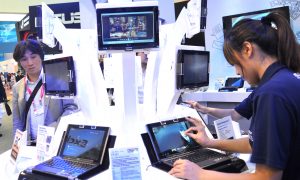 Semiconductor chips power everything from smartphones to missiles. Beijing has already set a goal to become the global leader in the manufacturing of these chips.

But a new think tank report warns that the Chinese regime’s aggressive moves to achieve its ambitions are having a negative effect on global industries, and the impact will likely be further exacerbated if trends continued.

The report, published by Washington-based Center for Strategic and International Studies (CSIS) on Feb. 27, was drafted by James Andrew Lewis, the think tank’s senior vice president and a former foreign service officer at the departments of State and Commerce.

“There is concern that if China achieved a dominant position in semiconductors, it might attempt to squeeze foreign competitors out of the market or use its lead as a coercive tool by denying or limiting sales,” Lewis wrote.

He explained how China’s actions are different from competition in the free market.

“While the efforts of Japan, Korea, and Taiwan raised competitiveness and trade concerns in the United States, they did not raise strategic or military concerns. These countries are partners. China is not,” he said.

According to the report, China currently only produces about 16 percent of its semiconductor needs, relying heavily on foreign imports. In 2017, China imported $260 billion worth of semiconductors, more than its total value of crude oil imports, according to Reuters.

The report warns that if China succeeds in gaining dominance over world markets, “it will use it for intelligence, military, commercial, and political advantage by manipulating the semiconductor supply chains that Western economies and militaries depend upon.”

It gave the example of telecom giant Huawei as an indicator of what a state-backed semiconductor industry could do: having received subsidies and investments from Beijing, while using industrial espionage to steal know-how from Western tech firms, Huawei flourished because it could make quality products at low costs.

The Chinese regime announced its semiconductor ambitions early on. In June 2014, China’s State Council announced the “National Integrated Circuit Industry Development Guidelines,” which set up a central-level state fund to boost China’s IC (integrated circuit) industry, while encouraging regional governments to set up their own funds.

About a year later, Beijing announced its “Made in China 2025” plan, which set out the goal for China to fulfill 40 percent of its domestic semiconductor needs. By 2025, the goal was to increase the rate to 70 percent.

Such subsidized expansion of China’s industry will eventually squeeze out producers in other countries as workers there see a shrink in their income and their firms spend less on further research and development, the report predicted. Ultimately, that would “weaken the global industry and the pace of semiconductor innovation.”

Beijing also resorts to intellectual property theft to boost its own semiconductor sector, including by recruiting Chinese workers from U.S. firms, and pressuring Western firms to transfer their technology in exchange for access to the Chinese market, the report said.

But China’s semiconductor technology advancements are still very limited at the moment.

Of all the different kind of chips—logic, memory, sensors, power, signal, and analog—China has had success with making memory chips that store data, which require a less complicated manufacturing process. On the contrary, it is not capable of producing high-end logic chips, such as CPUs (central processing unit) that function as the main engine of computers.

China’s challenge is that it lacks “know-how,” or knowledge and skills built up with years of experience, according to the report, despite the fact that 19 new semiconductor fabrication facilities (fabs) have been built since 2017.

It is precisely this disadvantage that has led China to try acquiring American chip makers, such as Lattice, Micron Technology, and Western Digital Corporation.

In 2016, Unisplendour, a unit of China’s state-backed chipmaker Tsinghua Unigroup, attempted to acquire a 15 percent stake in U.S. manufacturer Western Digital, according to the Wall Street Journal. The Chinese company abandoned the plan after the Committee on Foreign Investment in the United States decided to investigate the deal.

In the case of Micron, the firm rejected the deal in 2015, reasoning that U.S. regulators would never greenlight it.

Between 2015 and 2017, Chinese investors offered over $30 billion in bids for American and European semiconductor companies, according to the report, citing The Wall Street Journal.