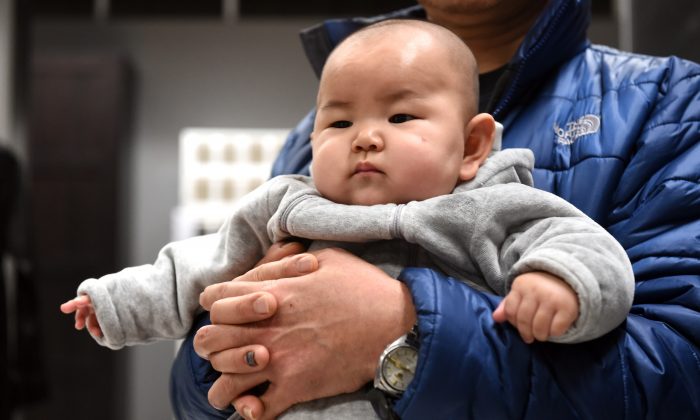 A Chinese baby in the arms of his father at a furniture store in Beijing on Jan. 19, 2015. (Goh Chai Hin/AFP/Getty Images)
China

Hospitals, doctors, and officials conspire to create fake birth certificates to mask the origins of abducted children, who are then sold as orphans
By Frank Fang
biggersmaller
Print

Parents in China have for years faced an agonizing prospect: having their child abducted and sold into a trafficking ring. The problem is remarkably common and intractable, with tens of thousands of children going missing in the country every year.

The industry that has sprung up around child trafficking—involving the police, doctors, nurses, and hospitals—explains why the problem has reached such a scale.

The lynchpin to it all is a shady market for fake birth certificates. Once a child has been abducted, a broker is able to bribe hospital staff to create a birth certificate in the hospital’s computer system, effectively laundering the child by changing its identity and allowing new parents to claim it as their own.

No matter how good the hospital is, there are doctors there who want to make more money.
— Zhao Dapeng

“After I get you the birth certificate, you can check with the hospital. And if you can access the medical record, you know the certificate is real,” said Zhao Dapeng, 32, who has been greasing the wheels of the child abduction industry for five years.

Zhao was speaking with a journalist from the semi-official Beijing News, who had reached him through a contact. Zhao said that he charged 100,000 yuan (about $15,000) for a certificate, which he could get in two weeks through either hospitals or state-run maternity clinics.

“No matter how good the hospital is, there are doctors there who want to make more money. Their salary is only about 3,000 to 4,000 yuan [$400 to $600] per month,” Zhao explained. He pays off doctors, hospital directors, nurses, and anyone else necessary to create the fake certificates.

The certificates are registered in the hospital’s computer database, just as though they were for real births.

In November 2014, police rescued five adopted children who had been stolen from their biological parents in Tongfang County, in southern China’s Fujian Province, according to the state-run Legal Evening News. Two of the parents had made their adoptions “legal” by registering the children in China’s household registration system after paying more than 20,000 yuan (about $3,000) for fake birth certificates.

The investigation of that case revealed the extent of the fraud. Authorities found that the corrupt doctor selling the certificates—Liang Shaoquan, director of the Tieyongzhen Health Center in Guangdong—had paid off nurses to fake detailed medical records of the supposed pregnancy and delivery for the adoptive mothers.

Liang was given a one-year sentence in July 2015 for bribery and abuse of power.

Government officials have also been implicated. In August, Liu Xin, a bureaucrat at the Health and Family Planning Commission in Longhui County, Hunan Province, was detained after he was found peddling authentic birth certificates that could be used like blank checks: The new parents just had to fill in the requisite information.

The middleman, Xiong Mingzhong, then resold them online for between $7,500 and $15,000, according to the online news website The Paper.

Over 70,000 children are abducted every year, according to estimates reported in the Chinese press, and less than 0.1 percent of them are tracked down and reunited with their parents.

The ability to buy birth certificates on the black market, to legitimize the abduction, exacerbates the problem. Without it, the adoptive parents would not be able to send the children to school, and it would be easier for birth parents to locate their stolen children.

Even a well-known online platform designed to facilitate interactions between couples seeking to adopt and those wishing to give up their children has been implicated. Mr. Zhou, the founder of the platform Fulfilling Dreams of Adoption, was found guilty of selling over 110 birth certificates and making an illegal profit of over $90,000, reported Xinhua in September 2014.

Zhou used China’s popular messaging app WeChat to talk with potential buyers and mediated the exchanges via a jewelry front store on Taobao, China’s equivalent of eBay. He was caught after a probe by police in 27 provinces resulted in the rescue of 382 adopted children and over 1,000 arrests.

Online stores like Zhou’s have been operating in the open for years, often selling birth certificates as “high-quality birth certificate envelopes.” When a reporter from the state-run Global Times contacted one of the stores in 2013, they asked whether the store was able to produce a new birth certificate.

“We can, parent,” the store responded.