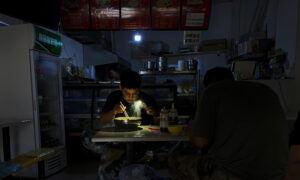 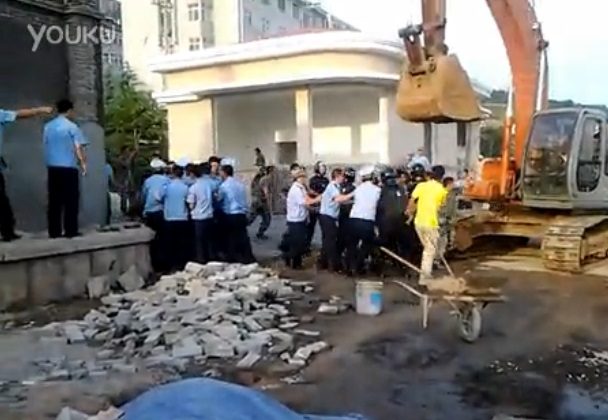 Urban enforcement officials, or chengguan, face off against People's Liberation Army soldiers during a recent clash in Shandong Province. The chengguan overcame the PLA to demolish a structure that had been deemed illegal. (Molihua.org)
China

Not even the People’s Liberation Army is safe from the chengguan, China’s notoriously violent urban enforcement officials. On Sept. 4, in a bizarre incident in Qingdao city, Shandong Province, over a hundred chengguan advanced on a military compound in the city’s Laoshan district, where they surrounded and forcibly demolished a security gatehouse after overwhelming the onsite personnel.

In a pair of videos posted on Youtube, the chengguan, some donning riot gear, can be seen clashing with the PLA men in front of the gatehouse, dressed in olive green fatigues. Both sides wielded clubs during the chaotic brawl. Severely outnumbered, the soldiers were ultimately forced to withdraw. The chengguan concluded their victory by demolishing the gatehouse with an excavator they had brought to the scene.

The City Urban Administrative and Law Enforcement Bureau, shortened to chengguan in Mandarin Chinese, was created in 1997 as an extension of the police, ostensibly to manage street vendors and enforce urban code. In practice, however, the chengguan have become synonymous with terror and violence as they harass, beat, and even kill unarmed victims for little or no legal cause.

Netizens expressed shock, sarcasm, and disbelief at the incident.
One user named Lawyer Zhou Ke commented: “Even the Liberation Army was reduced to this sorry state by the chengguan; how can they defend our country and our people?”

Netizen “Duyahuiyirujiwang” remarked, “Even the Liberation Army personnel, with guns, were attacked, to speak nothing about civilian folk.”

Zaiyintianyedouwusuowei was skeptical: “The guardhouse can’t belong to the army. The chengguan wouldn’t dare attack it; they’d be dead if it was the army’s. It must be some company’s illegal construction. The ‘soldiers’ are just hired security guards wearing camo T-shirts. Don’t slander our military!”

DiCaprio Junfeng wrote, “Everyone says the chengguan should go reconquer the Diaoyu Islands. Sounds good to me. Their combat skills are top-notch.”

With research and translation by Frank Fang and Lu Chen.