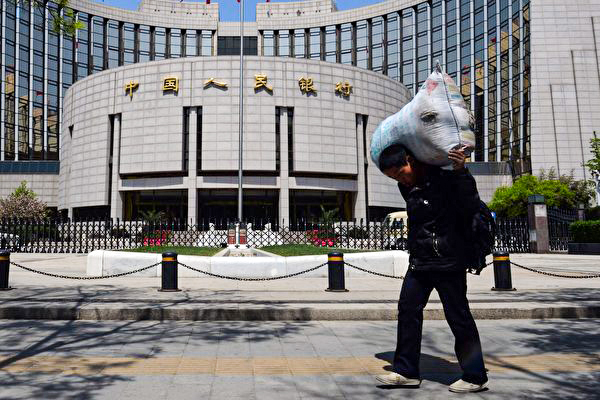 The picture shows a Chinese migrant worker passes by the People's Bank of China in Beijing, on May 1, 2013. (Mark Ralston/AFP)
China Business & Economy

The People’s Bank of China (PBOC) surprised markets by cutting a key interest rate for the second time in 2022 as the country’s economy struggles to grow.

The central bank reduced the rate on its one-year medium-term lending facility (MLF) loans by 10 basis points, from 2.85 to 2.75 percent. The move is aimed at keeping the liquidity of the banking system “reasonably ample.”

The PBOC offers MLF loans to some financial institutions, with current loans totaling 400 billion yuan (approximately $59 billion). The bank also cut down its main rate at which it offers short-term liquidity to banks, from 2.1 percent to 2 percent.

A recent Reuters poll of market watchers had predicted the PBOC to keep the MLF rate unchanged. This is the first time since January 2022 that the PBOC reduced both these rates. The central bank had earlier signaled that it was reluctant to cut down rates due to multiple economic issues, such as inflation, rising debt, and the pressure on yuan.

As such, the central bank decision came as an unexpected decision for many experts. “The rate cut surprises us … It should be a response to the weak credit data on Friday. The government remains cautious about growth and will not let go,” Xing Zhaopeng, senior China strategist at ANZ, said to Reuters.

The PBOC decision followed a slew of dismal economic data. Retail sales, for example, grew only by 2.7 percent in July compared with a year ago. This is down from 3.1 percent in June. Industrial output grew by 3.8 percent, down from 3.9 percent.

New credit grew at the slowest pace since 2017. China’s economic slowdown kicked off in March after authorities imposed strict COVID-19 lockdowns in dozens of cities.

According to Nomura Holdings, China’s growth in the second half of 2022 will be negatively affected by its strict COVID-19 policies, a potential slowdown in exports, and a downward spiral in the property market.

“Beijing’s policy support could be too little, too late, and too inefficient,” Nomura said about the rate cut in a note, according to Bloomberg. “We think markets are too optimistic about growth in the second half, and we expect a new round of cuts of growth forecasts in coming weeks.”

China’s property market also has been in trouble for some time. As the sector accounts for around 30 percent of gross domestic product (GDP), it is putting significant pressure on the economy. The crisis in the property market was triggered by angry buyers who are threatening to stop paying mortgages on unfinished homes.

According to Goldman Sachs, the situation is now making people more reluctant to invest in a new home. JP Morgan is expecting the first-half earnings of Chinese developers to be lower by 30 percent year over year.

In the first seven months of 2022, property investment by Chinese developers fell by 6.4 percent. In July, new home prices fell for the eleventh straight month in 70 major cities.