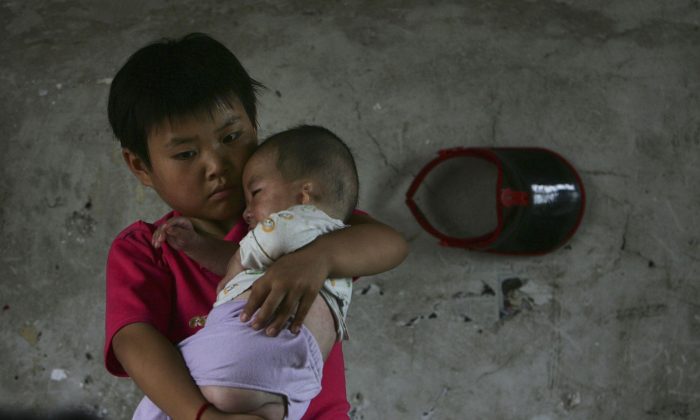 Wang Huaixue holds a baby at Wang Jiayu Orphanage on July 9, 2006 in Anhui Province. Millions of official and unofficial orphans are the victims of a Chinese social system. (China Photos/Getty Images)
China

When Wei Qiang called home on March 15 and nobody answered, he was not too worried. But when nobody picked up the phone three days later, Wei knew something was wrong and he called his neighbors to check on his home—where his 44-year-old mother and 1-year-old daughter lived by themselves.

The tragedy was uncovered at Wei’s home in Suzhou City, Anhui Province in eastern China—Wei’s mother had died and his daughter was on her last breath, reported state-run media Guangdong News on March 25. After emergency care at the hospital the child lived.

Like Wei and his wife, millions of rural Chinese people are migrant workers who work in the cities while leaving their children behind in rural villages in the care of their senior relatives.

These children are coined the “left-behind” children, and, according to Chinese regime mouthpiece Xinhua on March 13, there are currently 60 million such children in China.

In China, law regarding child support will never be fully enforced because of corruption, the ineffectiveness of the rule of law, and undemocratic practices by the Chinese regime.
— Gao Guangjun,  exiled Chinese human rights lawyer

These children are vulnerable. In 2014, 49.2 percent of them had some sort of accident, and leftover girls were victims of 18.6 percent of all sexual assault cases involving young women, according to Xinhua.

A 12-year-old girl from Guang’an, a city in eastern Sichuan Province, set the home of a neighbor on fire in March 2014, because she thought her mom would come home if she caused a disturbance, according to Xinhua.

The core of the problem lies with the system of household registration in China. An official record identifies a person by name, parents, spouse, date of birth, and residence area. One is only allowed to live in the registered area.

The household registration system has created another social problem. According to a report on March 23 on People’s Net, the state-run website under the Party mouthpiece People’s Daily, there are around 580,000 “de facto orphans” living in China—children who don’t receive adequate parental care when their only parent is missing, mentally ill, imprisoned, or severely disabled.

While orphans can receive a monthly stipend from the local authorities in Shaanxi Province of northwest China, “de facto” orphans receive nothing because they don’t have proof that both of their parents are dead, according to People’s Net.

In an interview with Epoch Times Jiang Yuanmin, a rights activist in China, expressed doubt about the number of “de facto orphans” published by the Party mouthpiece.

“There are at least 100 million de facto orphans in China because there are 300 million migrant workers from rural areas,” said Jiang.

Jiang suggested that the system of household registration must be removed first, in order to solve the problems with left-behind children and de facto orphans.

“The household registration limits the freedom of Chinese people because they cannot travel freely. And the Chinese regime adopts such a system because it can better control the citizens under the guise of social stability,” said Li Yexiong, a lecturer from Guangzhou University in the capital of Guangdong Province, in an interview with Epoch Times.

“In Europe and the United States, there isn’t something like this because the children always stay with their parents,” said Li.

Gao Guangjun, an exiled human rights lawyer living in Europe, in an interview with Epoch Times, also questioned the number of de facto orphans released by the Party mouthpiece, while making a comparison between China and the United States.

“In the United States, there is a law requiring that parents take care of their children,” said Gao. “If they cannot or are incapable, the U.S. government will step in and look after these children. Never will the children be hungry or cannot go to school.”

“In China, laws regarding child support will never be fully enforced because of corruption, the ineffectiveness of the rule of law, and undemocratic practices by the Chinese regime,” added Gao.