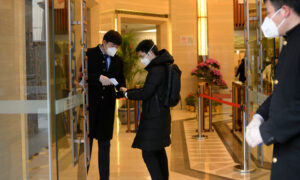 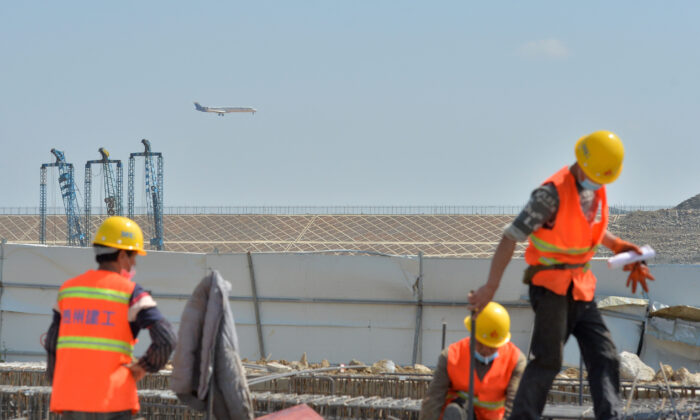 Workers wearing face masks are seen at a construction site for the expansion of Guiyang Longdongbao International Airport as an airplane flies over, in Guiyang, Guizhou Province, China, on March 8, 2020. (China Daily via Reuters)
China Business & Economy

BEIJING/TOKYO—China’s construction activities were stalled in February as the government extended Lunar New Year holidays and advised people to stay indoors as a precaution against a coronavirus outbreak.

Data from Japan’s Komatsu, one of the world’s biggest makers of earth-moving equipment, showed use of its machinery in China fell nearly 30 percent to 32 hours last month, from a year ago.

That compares to 59.1 hours in January and 44.9 hours in February last year.

Millions of construction workers in China returned to their hometowns for traditional week-long Lunar New Year celebrations, which kicked off in late January.

But the government extended the holiday for an extra two weeks in a bid to contain the spread of the virus.

Property and infrastructure projects, including the second-phase of the China-Russia natural gas pipeline project, were halted until late February.

The Caixin/Markit Manufacturing Purchasing Managers’ Index (PMI) showed the sharpest contraction in factory activity on record in February, down sharply to 40.3 from 51.1 in January.

Inventory of construction steel rebar with Chinese traders soared to a record high of 12.23 million tonnes by March 6, up nearly 20 percent on the year, data compiled by Mysteel consultancy showed.

Average utilization rates at cement producers across China last week were 13.71 percent, up 5.13 percentage points on the week. But cement producers in northern China remained mainly shut as resumption at construction sites was still slow.

In an effort to revive the economy hit by the coronavirus outbreak, China has been striving to bring workers back to their posts and enable firms to resume operations, by offering financial support and approving new infrastructure projects.

By Wednesday, 24 regions had lowered emergency response levels to the epidemic. The transport ministry expects all migrant workers to return to their workplaces by early April.

By Muyu Xu and David Dolan