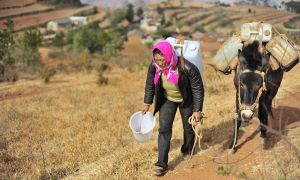 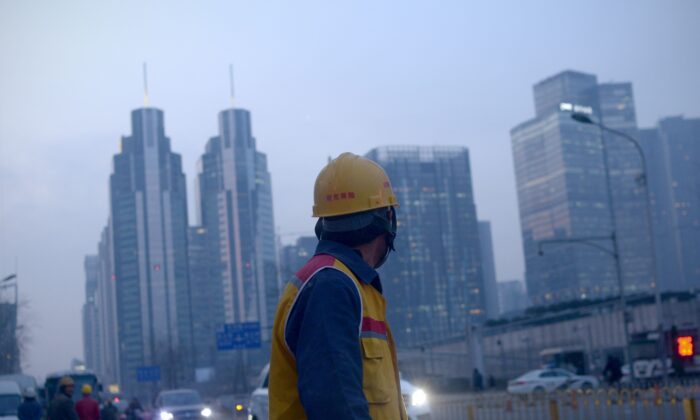 A Chinese worker walks along a street after work in Beijing on Dec. 28, 2015. Construction workers, machine operators in factories, office cleaners—the sweat of their brows has contributed to China's economic growth. But while they are free to move in search of employment, they and their children have long been denied equal access to public services such as schools, hospitals and housing under a decades-old household registration system known as "hukou." (Wang Zhao/AFP via Getty Images)
Thinking About China

In a piece for The Atlantic, David Brooks laments the decline of American society. “These days,” writes Brooks, “your education level and political values are as important in defining your class status as your income is.” The country has split into two distinct, “separate class hierarchies—one red and one blue.” The “ideological divide” is fast becoming a chasm. The United States, according to Brooks, is in trouble.

In China, meanwhile, the opposite is true. At least that’s the opinion of Fang Zihao, who recently wrote an opinion piece for the South China Morning Post. His article, provocatively titled “China’s secret of success: the country is more committed to inclusivity than you’d think,” deserves to be dissected. China, a country tightly controlled by a tyrannical regime, is not necessarily synonymous with the word “inclusivity.” Tyranny? Yes. Genocide? Yes. Inclusivity? But, in Zihao’s opinion, China’s predisposition toward inclusiveness motivates “the ordinary individual to strive.”

To strive toward what, exactly? After all, to strive anywhere, a person needs money. You can have all the ambition in the world, but without adequate finances, ambitions are difficult, if not impossible, to fulfill. With Xi Jinping recently announcing the eradication of extreme poverty, perhaps more “ordinary” individuals can now “strive” toward something meaningful. Or perhaps not.

It’s important to note that the Chinese regime uses a poverty line of about $2.25 a day. As the economist Indermit Gill notes, “The World Bank believes that a threshold of $1.90 a day is appropriate for countries with per capita incomes of less than $1,000 or so, such as Ethiopia.” However, China is an upper-middle-income country. For this very reason, a poverty line of “$5.50 a day” should be used. By this metric, somewhere between 80 and 90 percent of the Chinese population live in poverty. $5.50 a day works out at $38.50 a week, $154 a month, and about $1,848 per annum, before tax. Whether you happen to live in Shenzhen or South Bend, $1,848 won’t get you very far. In fact, it won’t get you anywhere at all. When we think of wealth inequality, our minds, somewhat inevitably, turn to the United States. However, in China, the gap between the “haves” and “have nots” has never been as profound as it is today. Well over half the Chinese population still live in rural areas, with a large number living in abject conditions. In China, the path from poverty to a middle-class existence is a difficult one to navigate, largely because it doesn’t exist; if you are born into poverty, in poverty you shall remain. As the Chinese regime places more emphasis on strengthening the infrastructure of its major cities, those living in rural areas get left behind. Such a method of governance appears to be the very opposite of inclusivity.

The term caste conjures up images of places like India and Nepal, where social stratification is inextricably linked with the realities of everyday existence. The caste system, the antithesis of inclusivity, divides societies into rigid hierarchical groups. In China, a caste system exists, which, as the author Noah Dowe writes, has seen the country’s top earners thrive. Those at the bottom, meanwhile, have been (and continue to be) ignored and overlooked. By Dowe’s calculations, China’s elite “have seen their wealth grow up to 3x as fast as the nation’s bottom 50 percent.” With this, “the share of national income possessed by the working class has plummeted.” The ultra-rich, on the other hand, continue to “reap the benefits of modernization.” These gross inequalities exist largely because of the Chinese system of hukou, where house registration details are used to control the masses.

Ostensibly created to protect the rights of Chinese citizens, the hukou system is little more than a way of discriminating against people who happen to come from a certain province. The hukou system, like China’s social credit system, allows authorities to treat people differently. With the hukou system, however, one’s geographical location is the prime metric used to discriminate. Then again, if you happen to be from a more “respectable” area in China, like Beijing or Shanghai, the hukou system will likely work in your favor. Either way, whether one benefits or suffers because of the system, it is, by design, anti-inclusive.

As Dowe laments, “holders of rural hukou are ostracized and discriminated against by their fellow citizens.” With little chance of securing a decent job, these people find themselves taking on “the most dangerous, demanding, and low-paying jobs” imaginable; the types of employment “that those with urban hukou wouldn’t dare involve themselves in.” The divide between the urban “haves” and the rural “have nots” is a stark one. With the hukou system, as you can see, the divide is by design. It is not a glitch in the system. Because of this, rural residents, writes Dowe, “can expect to earn nearly 40% less on average than a natural-born urban citizen.” With millions of illiterate individuals left behind, with little money and even less hope, the hukou system is as brutal as it is unnecessary. If the Chinese regime is as committed to inclusivity as Zihao seems to believe, then why are so many people living in wretched conditions?