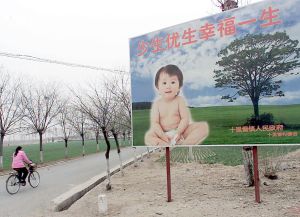 A woman cycles past a billboard encouraging couples to have only one child, along a road leading to a village in the suburbs of Beijing in this file photo. (Goh Chai Hin/AFP/Getty Images)
By Olivia Li

China’s birth rate has fallen to the lowest level since the communists took over China in 1949, and the trend may continue as the country’s marriage rate has also dropped to a 12-year low.

Furthermore, the number of marriage registrations was 9.471 million last year, a drop of about 668,000 from 2018 and the lowest since 2007, based on data released by China’s Ministry of Civil Affairs on Jan. 19.

The policy was strictly enforced, with a family planning office in every corner of the country. Those who violated the rule have faced fines, humiliation, loss of jobs, and oftentimes forced abortions. If their second or third child was born without government permission, this child would have great difficulty obtaining a resident ID, which in turn would cause big problems when the child has to to attend school.

Authorities reversed the one-child policy in 2015, when they realized that China was facing another demographic problem—an aging population and a shrinking labor force.

Chinese state media has admitted that the low birth and marriage rates in the past year are reflected in demographic and social problems.

After 36 years of state-enforced birth restriction, the child-bearing age group has shrunk dramatically. Gender imbalance has also become a serious problem due to gender-selective abortions.

Take Ningbo City, the second-largest city in Zhejiang Province, which is one of the more developed provinces in the country, as an example. There were 32,604 marriages in Ningbo last year, the lowest number in nearly 30 years, according to Ningbo Evening News. Divorces reached 17,766, a record high since 1991.

The average marriage age in Ningbo is 32 for men, and 30 for women.

“Due to pressure from jobs and [high] home prices, more and more young people choose to get married at an older age,” Ningbo Evening News reported.

Overseas Chinese commentator Wen Xiaogang agrees that the pressures of modern life and high cost of living are indeed major reasons for the low marriage and birth rates.

Speaking to the Chinese-language Epoch Times, Wen pointed out that under communist rule, the majority of Chinese citizens feel that their basic needs are not guaranteed, because unemployment benefits and health insurance are inadequate when they are needed.

The widespread social problems in the country, such as corruption, toxic foods, and even toxic clothes, discourage young educated people because they feel they aren’t able to provide a good future for a child, Wen said.

And lastly, Wen said that some young people don’t have any sense of responsibility because they are influenced by the communist indoctrination. “They do not want to shoulder the responsibility of having a family, and they choose not to get married.”

Shortly after the birth rate data was released, Chinese internet users posted many comments, saying they can’t even afford to raise one child, let alone more than one.

“We cannot afford to buy a house, nor can we afford to have a child.”

“I am impoverished. I am afraid that if I get married, my spouse will suffer the same impoverished life with me. My parents will urge me to have a child if I ever get married, but the child will continue the cycle of poverty. So I prefer to remain single.”