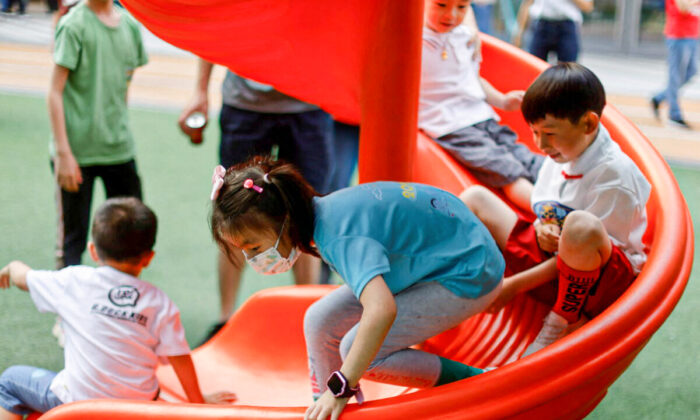 Children play at a playground inside a shopping complex in Shanghai on June 1, 2021. (Aly Song/Reuters)
Social Issues

China’s birth rate dropped for a fifth consecutive year to the lowest level since the communist regime took control of the mainland, official data showed on Jan. 17.

The rapidly shrinking birth rate underscores authorities’ continuing challenges in boosting its population as it grapples with an aging population and an impending shortage of workers. In 2016, it scrapped the nearly five-decade-old “one-child policy” in a bid to jumpstart population growth, although the high cost of urban living has deterred couples from having more children.

Last year, 10.62 million babies were born, as the birth rate fell to a fresh low of 7.52 per 1,000 people, the lowest level since the Chinese Communist Party (CCP) took control of the country in 1949, when the National Statistics Bureau (NBS) began collecting the data.

The natural growth rate of China’s population, which excludes migration, was only 0.034 percent for 2021, according to the NBS data released on Jan. 17. The figure marks the lowest since 1960, when the great famine caused by the CCP’s Great Leap Forward campaign killed an estimated tens of millions.

“The demographic challenge is well known but the speed of population aging is clearly faster than expected,” said Zhang Zhiwei, chief economist at Pinpoint Asset Management. Zhang suggested that China’s population may have reached its peak in 2021.

Another expert said the country’s population may already have started to shrink.

NBS data shows there were 10.14 million deaths in 2021, slightly lower than the 10.62 million births, pushing the total population downward to 1.43 billion.

China’s population has largely been shaped by the one-child policy that the communist regime introduced in 1979.

The notorious policy strictly limited couples to having only one baby. Families that violated the rule faced fines, job loss, forced sterilizations, and even forced abortions. The birth restrictions also led to a gender imbalance, due to the cultural predisposition to having boys. The new data shows that men outnumber women by 33.62 million.

Now, the regime wants couples to have three children. In August 2021, the communist regime announced the three-child policy, and some local governments introduced supportive measures as part of the regime’s efforts to change China’s population structure.

But these policies are struggling to find traction, with an increasing number of young people shirking the traditional path of forming a family. Marriage registrations dropped for a seventh consecutive year in 2020, official data show.

The exorbitant costs of raising a child and high property prices are the main reasons dissuading young people from marriage, according to a recent survey conducted by the Communist Youth League, an affiliate of the CCP.