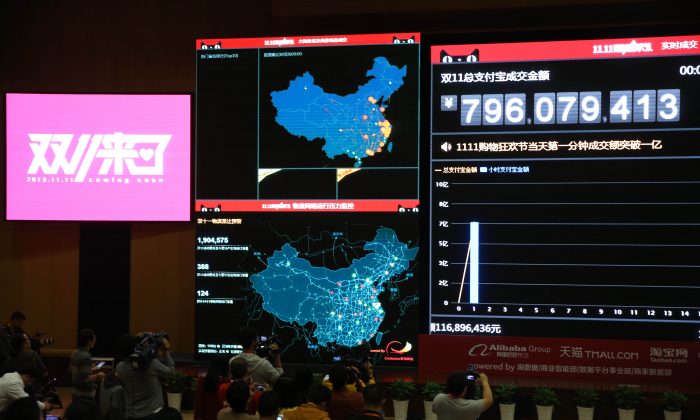 Chinese consumers are serious when it comes to shopping. On the Cyber Monday-like online sales holiday held on Nov. 11, China’s largest online retailer, Alibaba, has made billions of dollars in sales. In 2016, Alibaba apparently made US$17.8 billion in sales in the span of just 24 hours, according to the MIT Technology Review.

The online shopping spree began on Nov. 11, 2009 as a special sales event on Taobao Mall, an online retail platform operated by Alibaba (which would later be renamed as Tmall.com). Its immense popularity led to the date becoming an official sales holiday every year.

But a recent exposé has revealed that much of these sales could have been fake.

Meanwhile, the widespread occurrence of scams and fake products from past years has made consumers nervous about what they might face this time around.

In a report published in the Shandong Daily on Nov. 5, an investor in a major furniture store in China described how the store’s online operations made up fake transactions totaling 25 million yuan (about US$3.8 million) during last year’s Nov. 11 sales holiday.

The company, called Jia Zhuang in Chinese, has 500 physical locations spanning 20 different counties and cities, which also fill customers’ online orders via its regional online stores on Tmall.com. In the days leading up to Nov. 11, 2016, each online store was tasked with making a set number of fake transactions, according to the investor, named Zhou Dongdong.

He explained that the fake transactions were made under fake names, in order to increase the company’s sales volumes and popularity ranking—in the hopes of attracting real customers to make purchases.

The report also mentioned that the company offers interior decorating services. Many customers who hired the company complained of construction that would stall indefinitely without explanation.

Other online vendors pay for positive reviews of their products, or delete negative feedback, in order to gain a competitive edge.

According to Caixin, a Chinese business news publication, the country’s top prosecutor’s office has found 680 websites and more than 500 instant messaging groups in 2014 that offered to conduct fake transactions, leave positive comments on clients’ products and services, and post critical comments on their clients’ rivals. The combined value of fabricated sales amounted to more than 600 billion yuan (about US$90 billion).

On social media, Chinese netizens said they were used to the news of fake transactions. A Weibo (China’s equivalent to Twitter) user from Beijing warned that online reviews and sales numbers are usually fake, and gave tips on how to give star ratings anonymously. Another from Shanghai suggested that vendors who are caught selling fake goods or faking sales numbers should have their licenses suspended.

This week, local Chinese media reported that a woman from Zhengzhou City, Henan Province was scammed out of  50,000 yuan (about US$7,500) when she tried to buy a pair of new shoes online.

Thinking that on the actual day of Nov. 11, the high volume of sales may cause her purchase to not be delivered on time, Wang decided to buy a pair of shoes for her child a few days ahead. It cost 59 yuan (almost US$9) on the Taobao online shopping website.

When she did not receive the package on the anticipated delivery date, she called customer service. The operator told her that she could redeem an insurance fee on the product and asked her to scan a QR code. After scanning, Wang discovered that more than 9,000 yuan that was in her Alipay (mobile payment platform) account disappeared.

Wang called customer service twice more, each time the operator telling her that her money would get refunded as long as she continued following instructions. Wang was also swindled out of 40,000 yuan in her debit card account.