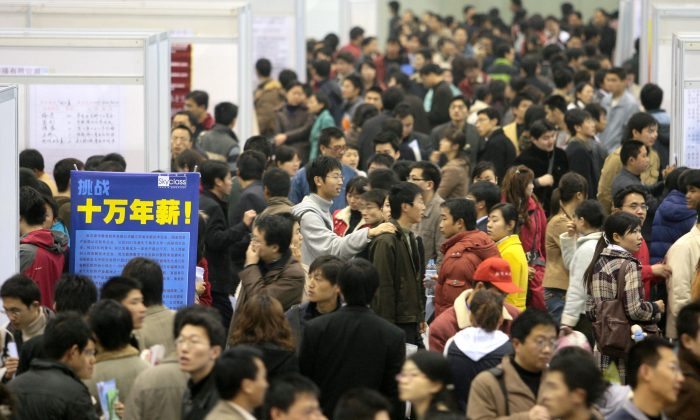 China’s Biggest IT Companies Are Cutting Recruitments to Save Costs

A number of mainland Chinese reports that major companies are hiring fewer new employees, including Huawei, Alibaba, JD.com, and Baidu, due to concerns about rising costs. The Chinese Communist Party (CCP) has reduced its employment targets by nearly a half compared with the plan for 2017.

Beijing Youth Daily reported on Oct. 24 that Huawei, the largest telecommunications equipment manufacturer in the world, stopped its social recruitment program to save costs.

The report revealed a classified document from the Huawei board, laying out clearly that “in principle, Huawei has stopped normal social recruitment.” The document proposes filling vacant positions from a smaller pool of candidates, or via internal reassignments.

Huawei denied the news immediately after the report was published. The the quantity of its total campus recruitment will fall by one third and annual salaries will be 210,000 to 240,000 yuan ($30,000 to $34,540), an average decrease of 10 percent compared with the previous year.

Other multinational Chinese information tech conglomerates are decreasing their staff recruitment as well. In China, the biggest IT companies are listed with the abbreviation BAT-TMD, that is, Baidu, Alibaba, Tencent, Toutiao, Meituan, and Didi Chuxing.

Sina, a major mainland Chinese news portal, reported that Baidu will decrease the volume of campus recruitment this year. Alibaba has stopped all social recruitment since Oct. 22 and will close all currently open positions if the interviewed candidates do not meet standards. Didi Chuxing will reportedly lay off 3,000 employees after the scandal caused when a driver raped and killed a female passenger in August.

Tencent denied rumors that it will lay off 6,000 employees, but on Sept. 30 announced that the implementation of a new structural adjustment may result in layoffs.

The Chinese IT business faces challenges. Meanwhile, the situation among real estate and financial businesses is even more dire.

No securities dealers held public recruitment drives this year, and real estate companies are following this trend, among them Vanke, a large residential real estate developer in China with property projects in more than 60 cities. Vanke has 42,300 employees, but has plans to recruit just 88 throughout China. 10 of which positions are located in Beijing.

On Oct. 21, China’s Central Organization Department, the Ministry of Human Resources and Social Security, and the National Civil Service Bureau jointly issued a state employment plan for 2019. New hires will be 14,537, 45.9 percent less than the figure for 2018.

While recruitments are falling, China expects 8.6 million new college graduates in summer 2019, a 5 percent increase from this year.