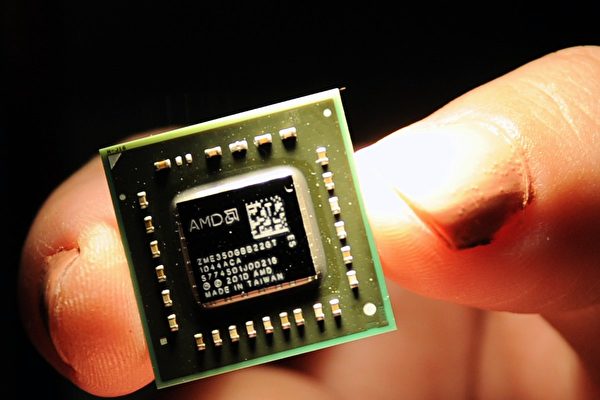 A chip the size of a coin, used in central processing units and graphic processing units developed by the U.S.-headquartered Advanced Micro Devices (AMD) is displayed during a press conference held in Taipei, Taiwan, on May 24, 2011. (Sam Yeh/AFP via Getty Images)
Technology

Beijing’s campaign for “scientific and technological independence,” especially pertaining to the microchip sector, has received mixed global response. While international industries fear the move could slow innovation and disrupt global trade, some China experts believe the quality and success rate of China’s chip development are low.

T-Head, a semiconductor unit of Alibaba, unveiled the E-Ten 710, a new CPU chip, in October 2021. The chip is said to be 5 nanometers in size and will only be used for Alibaba’s cloud computing business, with no plans to sell it to the outside, Alibaba said.

As an e-commerce giant, Alibaba’s cross-border development of chips is linked to the Chinese Communist Party’s (CCP) “core making” ambitions. China is the world’s largest consumer of chips, accounting for about 36 percent of global consumption but only 15.9 percent of global output.

Chip production is a top priority in the CCP’s “scientific independence” campaign in order to wean itself from reliance on advanced technology from the United States, Japan, and other countries. Huawei, China’s first global tech giant, was slapped with U.S. sanctions in 2018, which heightened Beijing’s sense of urgency to develop their own chips.

In addition to Alibaba, internet giants Tencent and Baidu, and smartphone maker Xiaomi, have also joined the “core making” movement driven by the CCP.

But the regime’s rush toward chip independence has added to international unease. Europe and the United States already saw Beijing as a strategic rival and feared it would steal their technologies. Western countries such as the United States and the Netherlands have restricted the CCP’s access to the most advanced chipmaking tools due to national security concerns.

Corporations also worry that if the world uncouples from China or splits into markets where industry standards and products are incompatible, parts made in the United States or Europe may not work in Chinese computers or cars. In that case, makers of smartphones and global operating systems may need to produce different versions for different markets, which could slow innovation.

The CCP has invested heavily in trying to solve the problem of China’s disrupted semiconductor supply. In 2014, the authorities pledged to invest between $100 billion and $150 billion in public and private funds to enable China to overtake the world’s leading companies in semiconductor technology, including chip design, assembly, and packaging, by 2030.

In September 2014, the regime established China’s National Semiconductor Industry Investment Fund, known as “Big Fund.” The initial investment was 138.7 billion yuan (about $22.19 billion) and focused on integrated circuit manufacturing, including equipment, materials, sealing, and testing. In October 2019, against the background of U.S. sanctions of Chinese technology companies, the second “Big Fund” phase was announced with a scale of 204.1 billion yuan (approx. $32.66 billion).

But according to Liu Pei-chen, a researcher at the Taiwan Institute of Economic Research, the CCP’s semiconductor development process is still slower than expected despite massive government investment, especially in the area of advanced manufacturing processes or independent R&D.

The main reason for the lag is that the CCP is still facing the problem of disrupted semiconductor supply and is unable to obtain key semiconductor equipment and chips due to European and American sanctions, Liu told The Epoch Times.

At present, the key equipment for advanced manufacturing processes is still held in countries like the United States, the Netherlands, and Japan; their market share is  over 70 percent, Liu said.

Shen Bo, global vice president and China president of Dutch semiconductor manufacturer ASML, confirmed in November 2021 that EUV (Extreme Ultraviolet) lithography machines, a key equipment in advanced processes, are still not available to China, but they can buy DUV (deep Ultraviolet) lithography machines used in mature processes. This means that Chinese foundries, such as SMIC, can only develop mature processes.

Without these advanced tools, China will be even further behind, says Peter Hanbury, who tracks the semiconductor industry for Bain & Co., a global consulting firm. “The TSMC (Taiwan Semiconductor Manufacturing Company) horse is sprinting away and the Chinese horse is stopped,” he said. “They can’t move forward.”

A 2021 report by the Semiconductor Industry Association (SIA) pointed out that China lags significantly behind when it comes to tools, materials, and production technology.

The CCP’s “Made in China 2025” plan calls for the domestic production of Chinese chips to reach 70 percent by 2025. However, it is almost impossible to achieve that goal at the current pace of development, Liu Pei-chen said.

Beijing has set its own chip targets and provided substantial government investment, but could face costly disappointment, the Associated Press quoted experts as saying. Chipmakers and other companies will struggle to remain competitive if they are separated from global suppliers with advanced components and technologies. Other than China, no other country has set the goal of chip independence.

Liu Qikun, a Chinese current affairs commentator residing in Canada, told The Epoch Times that China’s own scientific research capabilities are very poor, and the communist regime relies mainly on plagiarism to develop its science and technology.

“The CCP’s previous development of science and technology relies mainly on the theft of foreign intellectual property rights,” Liu said.

Cheng Xiaonong, a U.S.-based economist, told NTD in July 2021 that the theft of intellectual property and trade secrets by the CCP costs the U.S. economy between $225 billion and $600 billion annually, according to a report by The Commission on The Theft of American Intellectual Property.

Dr. Huang Zuwei, a senior engineer at NASA, told The Epoch Times that the success rate of the CCP’s independent chip R&D cannot be said to be nil, but it’s very low, and even if it succeeds, the end products will not be very good or may fail to meet standards.

“Have a look at the most advanced technologies in the world today. Which of them was first created by the CCP? None. All were copied from others.” he said.

Commenting on the national security risks posed by the CCP’s so-called “technological autonomy,” Dr. Huang said: “The national security concern is clear. Decades ago, European and American countries treated the CCP as a normal government, hoping to change it through normal exchanges. However, after all these years, the CCP not only hasn’t changed, but has been unscrupulously stealing technologies from developed democracies.”