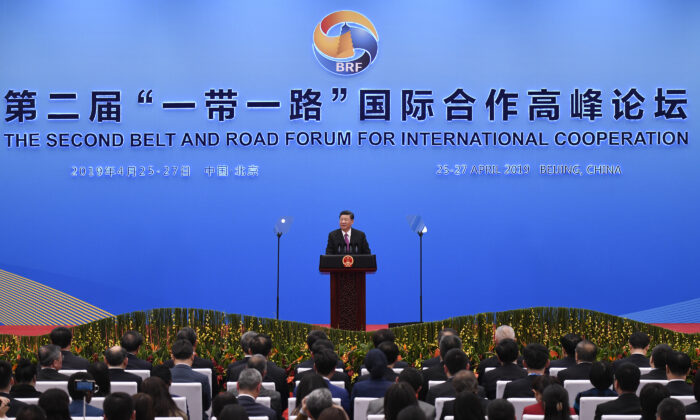 Chinese leader Xi Jinping gives a speech at a press conference after the Belt and Road Forum at the China National Convention Center in Beijing, China, on April 27, 2019. (Wang Zhao/Getty Images)
Thinking About China

A Silk Road to Debt

In 2013, Chinese leader Xi Jinping stated that he was initiating the BRI for mutual prosperity and to help developing countries improve their economic condition. However, most of the money these countries received from China was in the form of debt, rather than donations. The ratio on the BRI has been one grant for every 31 loans.

Between 2000 and 2017, China financed at least 13,427 projects, totaling $843 billion through more than 300 state-owned entities across 165 countries. Since the BRI began, in 2013, China has funded an average of $50-100 billion per year. The loans are largely in dollars and much more costly than funds from Western donor nations and institutions.

Debt to China is particularly problematic for developing countries because, unlike domestic debt, foreign debt must be serviced via exports. Consequently, there are definite limits as to how much debt poor countries can sustain. Even more, a general global economic slowdown has reduced the amount of debt that is considered sustainable. The largest borrowers are African nations that are now in debt distress or high risk of distress.

AidData Research Lab at William & Mary’s Global Research Institute determined that 42 low-and middle-income countries now have China debt in excess of 10 percent of GDP. For some countries, the debt is even more extreme. For example, Laos owes over 30 percent of its GDP to China.

The Strain of Debt Service

Many countries along the BRI have increased their debt to China. Some extreme examples include the following: Republic of the Congo’s debt to China went from 13.62 percent of gross national income (GNI) in 2014 to 38.92 percent in 2019; Djibouti from 7.71 percent to 34.64 percent; and Angola from 5.87 percent to 18.95 percent, according to a report by the Green Finance & Development Center (GFDC).

Between 2021 and 2024, as loan payments kick in, many nations will be so overwhelmed by debt service payments that they will be unable to continue with further investment. Among those hardest hit will be Tonga, Djibouti, Cambodia, Angola, Republic of the Congo, Comoros, and Maldives, according to the GFDC.

As a result of a lack of transparency in BRI lending, the official debt totals are estimated to be much lower than the actual total. The lending on BRI projects comes not only from the Chinese government, but from government-controlled agencies, state-owned firms, and private companies. The system is so confusing that even Chinese regulators do not know how much has been lent.

Due to the opaque nature of Chinese lending, there is $385 billion of hidden debt, which does not appear on the country’s balance sheet.

This off-balance-sheet lending comes as a result of the spaghetti-like structures of BRI lending arrangements. Special purpose vehicles, a type of shell company, are often created for the sole purpose of borrowing money, to keep it off of the balance sheet of the parent company or government entity.

China takes large chunks of equity in countries that cannot repay their debts. A BRI project in Laos is an excellent example of the confusing debt and equity structure. Three Chinese state-owned firms took a majority stake in a Laos joint venture, which owes China $3.6 billion. On the balance sheet, this will appear to be a debt owed by a Chinese company.

Along the entire BRI, 35 percent of the projects are plagued by corruption, unfair labor practices, environmental pollution, and protests. Stalled and abandoned projects are failing to generate the promised GDP gains for the host country. Domestic industries do not benefit from the construction of projects. Only 7.6 percent of projects are awarded to local companies, while 89 percent are carried out by Chinese firms. Employment gets no boost. The promised jobs often do not materialize, while even the laborers are brought from China.

Environmental researchers have determined that China is also benefiting by exporting its carbon emissions to BRI countries. Host countries are using up their carbon budget on BRI projects—this makes China richer and increases the debt of host countries.

While China is reducing pollution, installing green energy and solar at home, it is exporting pollution to other countries. For example, China exported a coal-fired utility plant to Cambodia. The net global emissions will remain the same, but the charge for the emissions of this plant has been shifted from China to Cambodia.

China invested in 240 coal power plants along the BRI between 2001 and 2016. Out of the 50 Chinese-financed, coal-fired power plants, 58 percent used low-efficiency, highly-polluting, sub-critical coal technology, according to Kelly Sims Gallagher, professor of energy and environmental policy at Tufts University.

A full 75 percent of BRI projects involve more fossil fuel combustion, while China is increasing clean energy products at home. Even the high-speed rail being sold to other countries have higher emissions than those in use in China.

Why Join the BRI?

Countries agree to enter into BRI agreements because they are unable to borrow elsewhere and because they believe that the GDP increases generated by the completed projects will outweigh the costs of debt. In reality, this GDP growth often does not come. One example would be Pakistan. According to growth models used on the BRI, Pakistan was expected to have a 5.18 percent increase in GDP. The China–Pakistan Economic Corridor (CPEC) began in 2015, but since 2018, Pakistan’s GDP has been in steady decline, hitting a low not seen in many years.

In 2019, the World Bank attempted to quantify winners and losers from the BRI. When taking their decision to join or not join, countries used different models to calculate projected costs and benefits. However, the World Bank attempted to create a unified model, based on geographic information, transportation costs, and the cost of building new infrastructure projects.

Far from a benevolent endeavor, AidData determined that, through the BRI, Beijing seeks to achieve three objectives: converting dollars earned through exports into foreign loans, providing work for the domestic construction and industrial sectors, and securing commodities. Another worrying trend is that 400 projects valued at $8.3 billion are linked to the Chinese military.