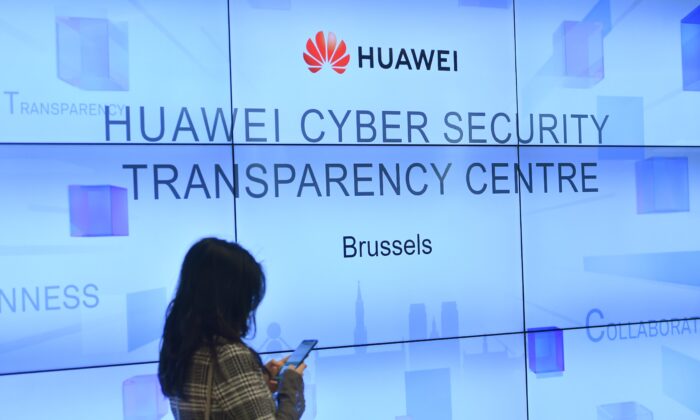 A woman is pictured at an event at Huawei Cybersecurity Center on May 21, 2019 in Brussels. (Emmanuel Dunand/AFP/Getty Images)
International

Beijing-funded think tanks, institutions, and ever-more savvy lobbying tactics are sprouting up across Europe as the stealth vanguard of China’s globalization plans.

Those plans all come under the Chinese moniker of the One Belt, One Road (OBOR), Xi Jinping’s flagship foreign policy project.

Concerns have been increasingly raised over OBOR debt traps, 5G security, and the security implications of key bridges, railways, and ports built by Chinese state-owned enterprises, as well as the key question of whether such infrastructure brings any tangible benefits to locals.

But ministers, lawmakers, and policy advisers in Europe seeking advice on such questions face a growing and often hidden influence from China’s lobbying, according to analysts.

“China has devoted far more resources to lobbying the EU and influential persons connected to it,” said Chris Devonshire-Ellis, the chairman & founding partner of Dezan Shira and Associates, which advises foreign investors in the OBOR initiative.

“They have mapped out the entire EU structure and, via Embassies, managed to piece together a concise map of who is connected to who and likely to be able to further their business interests.”

China launched the OBOR initiative in 2013 to build up geopolitical influence around the world, chiefly by partnering with more than 60 countries on infrastructure projects across Latin America, Europe, Asia, and Africa.

Beijing built up lobbying experience in its investment push into Africa, and outguns the EU on the lobbying front, according to Devonshire-Ellis.

“The China research intelligence program is a globally influential structure, not just pertinent to the EU”

According to Devonshire-Ellis, the African Continental Free Trade Agreement (AfCFTA) “required a huge amount on lobbying and ability to get pan-African governments around a table to agree to it.”

“That influence was beyond the EU’s capabilities. The same is happening with the belt and road initiative,” he said.

In 2015, the EU wrong-footed Chinese negotiators when it threw its legislative weight into the Budapest-Belgrade railway project, insisting that the tender be monitored and subject to controls and regulations imposed from Brussels.

That high-speed railway, linking EU member Hungary and non-EU Serbia, had been seen as a litmus test of the belt and road initiative into Europe. With drag from the EU’s intervention, some analysts suggest that little progress has been made in the five years since the project started.

After three years Beijing finally emerged from the tussle clutching the contracts, and with a determination to sharpen their lobbying game, notes Devonshire-Ellis in an earlier report.

Key to influencing policymakers and intellectuals along the Belt and Road is China’s burgeoning network of think tanks in Europe, according to Malgorzata Jakimow, assistant professor in East Asian Politics at Durham University and Secretary of the Centre for Contemporary Chinese Studies (CCCS).

“China’s think tank networks are huge,” said Jakimow. “These have been recognized by the Chinese Ministry of Foreign Affairs as the predominant tool for soft power.”

Such tactics raise alarm bells for watchdogs and transparency campaigners in Europe, who fear Beijing could be exploiting the EU’s lack of lobby transparency.

A report published in April by lobbying watchdog Corporate Europe noted that “often, conferences and seminars held in Brussels with a China theme are in fact receiving Chinese Government sponsorship.”

“Setting up and funding think tanks are a well-known lobbying tactic in Brussels; they create a useful impression of objectivity and impartial scholarship, whilst helping to shape the policy environment.”

The report, which was characterized by Devonshire-Ellis in an earlier analysis as a “who’s who” of China’s lobbying efforts in Europe, lists dozens of organizations and networks scattered throughout Europe with substantial ties to China, where there are yet more think tanks and institutes.

According to Transparency International, unlike in America, there is no obligatory lobbying register in the EU halls of power.

Vitor Teixeita, EU advocacy officer for Transparency International, describes Brussels as the most political city outside of America, noting that lobbying the EU is a highly effective way to influence large-scale policy.

“The European Commission employs over 30,000 people. There is a parliament that’s constituted by 751 MEPs (Members of European Parliament) of 28 counties.”

He said that they believe there to be a total of over 30,000 lobbyists (registered and unregistered) in Brussels alone. “That amounts to one lobbyist per person working for the European Commission.”

While seasoned politicians might be able to sniff out–for good or ill–a lobbyist in disguise, some 62 percent of the current crop of MEPs are freshmen, and, according to Teixeira, potentially more vulnerable to such influences.

Whether China’s lobbying is a problem depends on who you ask, notes Devonshire-Ellis, who characterizes it more as an imbalance.

“It’s just that they have been better at intelligence gathering than the EU, who, in turn, do not have an especially well constructed China or Asia platform,” he said.

Devonshire-Ellis said he supports the Belt and Road initiative.

“China wishes to build infrastructure from the EU to China,” he said. “If I were in charge I’d bite their hand off to build it and start selling EU goods to Beijing.”

But not everyone shares his enthusiasm.

Charles Parton is a former British diplomat to China and a senior associate for the Royal United Services Institute (RUSI), a defense and security institute.

“The belt and road doesn’t exist,” he said. “It’s merely a propaganda slogan—and a very effective one. But what does exist, and what really is important, is Chinese globalization.”

Together with other slogans like “win, win” or “common destiny,” OBOR is just a way to package up China’s overseas projects, investments, and technology deals under one message, according to Parton.

According to Parton, Beijing wants to use OBOR to get across the message that “the rise of China is inevitable and irresistible.”

While infrastructure projects might be good for the Chinese contractors who build them—protected by the state coffers—it isn’t clear what benefits they have actually brought to the hosting nations, he said.

For governments seeking to answer exactly those questions, China’s lobbying and influence muddy the waters, he said.

He points out the problem of self-censorship by academics and think tank experts in Europe with even indirect funding links to China.

Parton refers to “the anaconda in the chandelier,” a phrase coined by China analyst Perry Link to describe Chinese censorship.

“It doesn’t need to bite, or come down—just to move its coils a little,” Parton said.

He said he knows of speakers being disinvited from a conference where government officials are present, even when the sponsors were not a Chinese organisation.

Cash-strapped think tanks that have taken money from China will avoid “awkward topics,” he said.

Then there is the lack of Chinese expertise among the decision-makers in Western governments.

“Governments—and I’ve dealt with a few—really don’t know much about China,” he said.

Governments don’t keep tabs properly on who is who in the think tank and academic communities, and where those people’s sympathies lie, Patton said.

Some Chinese-born academics are compromised by virtue of having relatives in China, he added.

“There are a number of Chinese-born academics in our system who have relatives back in China or who intend to return to China,” he said. “The way the party operates at the moment, you have to clear your lines on what you write or say. It would be quite dangerous for these people, for the health of their careers, to do anything but talk the line given out by the party.”

“Some of these people have been in our country for a long time,” he added. “I can think of one particular person who is frequently called on to comment on the radio and media. What they say—it’s pure central propaganda department stuff.”

A New Form of International Relations?

Parton said the lobbying tactics are similar to those of a major international company.

“I think there is a major difference, however—because it’s the Chinese Communist Party. That makes it very different.”

For those wanting to understand what drives Beijing’s foreign policies, he points to Xi Jinping’s first speech, noting “he talked about an existential struggle between the socialist system and the Western capitalist system.”

When Xi launched the OBOR, the soft power message was built in from the get-go, according to Jakimow: a broader message that some academics call the “desecuritisation” narrative.

The desecuritization narrative is all about China’s presenting itself as a non-threatening country—a counter to the “China threat narrative” increasingly voiced by the United States, she said.

“The messages is: ‘China is not like the United States which is trying to spread neo-colonialism around the world.'”

“What they want is a change of language ​and topics,” she said. “For example, if you think about human rights, 20 years ago, all we would talk about would be human rights. Now we don’t even mention the words human rights. Now, it is faux pas, totally unacceptable to raise it in these forums.”

‘Nothing new at all’

Jakimow said that Xi has emphasized many times in speeches on the OBOR about the creation of an entirely new form of international ​relations.

Academics have been trying to figure out if this claim is real, she said.

“My opinion is that it isn’t. It’s actually a typical kind of realpolitik or Westphalian type of international relations. It’s nothing new at all.”

But Beijing’s lobbyists appear to be facing an uphill battle.

In a thinly-veiled reference to Huawei’s 5G technology, last week the European Commission published a report warning that  “state-backed” actors from “non-EU states” are the biggest threat for attacks on 5G mobile technology.

It reflects a growing shift towards Washington’s more hawkish take on OBOR that is often labeled a “Cold War mentality.”

In central and eastern Europe, where the OBOR has made more inroads, public suspicion over Chinese infrastructure projects is high—elsewhere projects have been mired in objections over security concerns.

In 2018, Chinese investors pulled out of a deep harbor project in Lysekil, Sweden—which would have become the largest Nordic port—after political will withered.

One thing is for sure: as Europe takes stock, and raise more questions over the OBOR, Beijing is certainly poised to influence the answers.