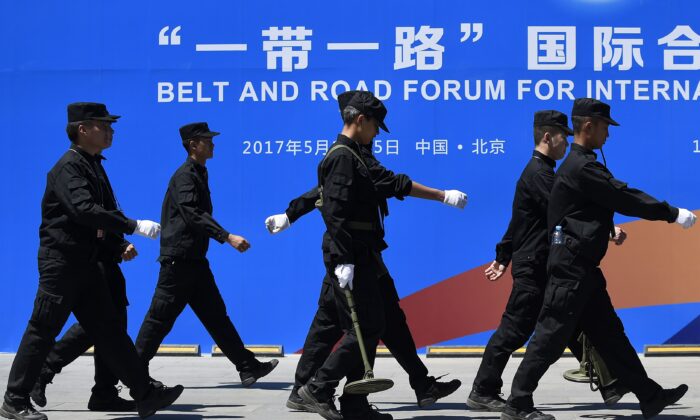 Security guards walk past a billboard for the Belt and Road Forum for International Cooperation at the forum's venue in Beijing on May 13, 2017. (Wang Zhao/AFP via Getty Images)
Thinking About China

The Belt and Road Initiative (BRI) is an internationally planned infrastructure development project for China and the emerging economies that trade with or border China. It’s a move designed to recapture the ancient Silk Road and expand China’s influence.

The original Silk Road lasted until the 15th century. It was a vast trade network that began in the Far East and ended in Europe, winding through the countries of modern-day Afghanistan, Kazakhstan, Korea, Kyrgyzstan, India, Mongolia, Pakistan, Tajikistan, Turkmenistan, and Uzbekistan. Today, this area is ground zero for China’s BRI.

The BRI is the most ambitious economic development and infrastructure project we’ve ever seen. Infinitely larger than the Suez Canal and the Panama Canal, the BRI aims to connect large swaths of land across China’s border and promote massive infrastructure developments.

As far as deeper motivations go, the Royal Institute of International Affairs, referred to as Chatham House, had this to say about the BRI:

“There are three main motivations for the BRI. The first, and most discussed internationally, is China’s rivalry with the US. The vast majority of Chinese international trade passes by sea through the Malacca Strait off the coast of Singapore, which is a major US ally. The second key reason for the initiative is the legacy of the 2008 financial crisis. China’s government responded to the emergency with a [4 trillion yuan] stimulus package, issuing contracts to build railways, bridges, and airports, but saturated the Chinese market in the process.

“Finally, the Belt and Road is seen as a crucial element in the Chinese government’s efforts to stimulate economies of the country’s central provinces, which historically lag behind richer coastal areas. The government uses the Belt and Road to encourage and support businesses in these central regions, allocating budget generously, and encouraging businesses to compete for Belt and Road contracts.”

Should America Be Worried?

Clearly, China has country partners at odds with the United States, whether they’re against democracy, free markets, or free speech, but that doesn’t matter here.

A project such as the BRI is all-encompassing and expansive—so when partners take detours, the partnership continues. For example, despite the trouble in Russia and the recent political changes in Pakistan, China remains unwavering. As far as Pakistan goes, the China-Pakistan Economic Corridor is often called an artery of BRI and is considered a jewel in China’s crown.

The BRI juggernaut is designed to integrate China into various spheres of influence along its borders and emerging economies. Like China’s state capitalism, where the Chinese Communist Party (CCP) gives cheap equity and debt to companies, Beijing engages in debt-trap diplomacy. Debt-trap diplomacy is when a country extends debt to a nation to increase the lending nation’s political leverage.

While one can’t say that the sole ambition of China’s BRI is to gain world control or block Western economies from continued dominance, it’s nearly impossible to deny that China is buying political influence in many of the world’s emerging economies.