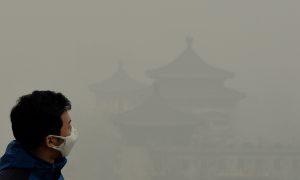 China’s campaign for cleaner air has come at a high cost for a city in an eastern province.

The methods employed have been classically Leninist and campaign-like, the style often adopted by the Chinese Communist Party: top-down orders to be followed to the letter, regardless of the inefficiencies or other consequences created.

Three days after Zhang’s meeting with the inspectors, he made 412 businesses adhere to a limited production schedule, and ordered the closure of 57 mainly coal, steel, and glass firms. The following day, on March 1, Zhang literally pulled the plug on the 57 companies—a glass panes plant lost its electricity supply with about 2,000 metric tons of molten glass and tin still in the furnace.

“If we resume production, we need to blast off the cooled, solid tin and glass waste, a process which will take four to five months. And the furnace is almost ruined,” a worker from the glass panes plant told Peng Pai.

A coal plant boss also told the Chinese news site that his company’s furnace was permanently damaged by the abrupt power outage, and estimated losses of at least 10 million yuan ($1.6 million).

Workers were next to go. About 60,000 people suddenly found themselves unemployed, and including their families, at least 150,000 Linyi residents were estimated to be affected by the layoffs, according to a local government worker.

With increased unemployment came increased crime rates. Linyi police said there were at least 10 robberies a day, according to Peng Pai.

The company closures also sowed the seeds of a potential financial crisis.

Linyi City has 300 billion yuan ($48.3 billion) in loans, a third of which were held by the 57 firms, according to figures from the local banking sector. Worse, 36 of the 57 firms are part of a vertical supply chain, one which services Huasheng Jiangguan Group, the city’s largest listed company.

The local government’s investment platform did give Jiangguan 70 million yuan ($11.2 million) in June to help the private firm finance the interest on its loans. Still, should the shuttered businesses later default on their loans, a debt crisis would ensue.

The affected companies also made up 40 percent of the city’s total industrial tax revenue; last year, the taxes collected from the financial industry amounted to 26 billion yuan ($4.2 billion).

Zhang Shuping’s move destroyed factory equipment, affected the livelihood of tens of thousands, and brought a city to the cusp of financial meltdown.

In return, Linyi did get less smoggy. From January to May, Linyi’s level of PM2.5—tiny particles that pose a health hazard—fell 24.3 percent. In comparison, Beijing’s PM2.5 readings dropped 20 percent from January to April.

It is unclear why Zhang would push through the draconian environmental protection measures in his city, but it makes sense in light of environment minister Chen Jining’s recent pollution report.

On June 29, Chen announced to the Standing Committee of the National People’s Congress that over 8,400 people were detained for flouting environmental laws in 2014. More than 3,000 companies, about the same number of small factories, and 3,700 construction sites were shuttered.

If Zhang hadn’t carried out the heavy-handed crackdown, he himself may have been punished, according to overtures made by the authorities. “The city is a microcosm of all cities that sacrifice the environment in the process of economic transition, and has to pay its historical debts to the environment now,” the environment ministry wrote on WeChat, a popular Chinese messaging app, in response to the Peng Pai exposé.