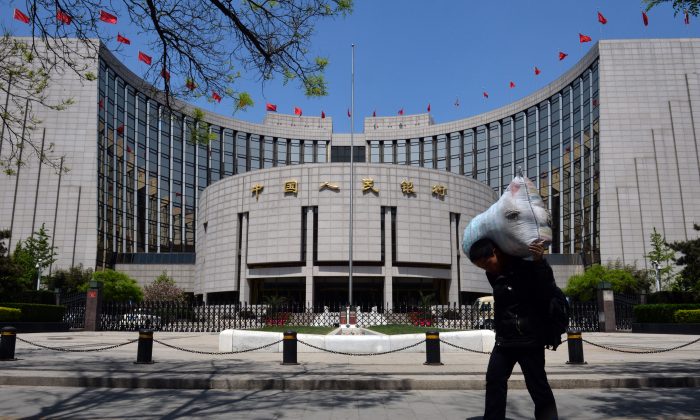 In this file photo, a Chinese migrant worker passes by The People's Bank of China in Beijing on May 1, 2013. China's banking system is curently suffering from a cash shortage. (MARK RALSTON/AFP/Getty Images)
Opinion

China’s Banks: Short of Money and Full of Debt

Just before the New Year, the markets needed to make up for a deficit, but many local banks are short of money. To solve this emergency problem, the People’s Bank of China supplied three hundred billion yuan (US$50 billion) to the market by short-term liquidity operations over a three day period last week, but still could not alleviate the pressure.

With the interbank offered loan rate at 8 percent and still climbing, the authorities banned media reporting of the situation in order to lighten the enormous liquidity pressure.

How tight were the year-end funds? Last week, the Shanghai Interbank Offered Rate (SHIBOR) rose across the board, which reached as high as 8.843 percent, 8.246 percent, and 7.6 percent for terms of 7-day, 14-day, and a month, respectively. Meanwhile, the 7-days-pledged-bond-repurchase weighted average interest rate once reached to 10 percent, setting a new record since the end of June.

The banks that are least likely to be short of money are now short of money. There is no worry for large state-owned banks, but the joint-stock commercial banks which need money desperately, and the small and medium urban commercial banks, which cannot participate in the interbank loan market, will face a lot of check bouncing crises.

To cope with the crisis, local banks borrowed money to pay debts, such as issuing financial products with rates far higher than the same-term deposit rate, even up to 10 percent. The private short-term financing rate starts from 10 percent without a bargain.

The best deal came from Taiwan. In early December, prior to the outbreak of the money shortage crisis in China, Bank of China, China Construction Bank, Bank of Communications, and The Farmers Bank of China were loaned $33.5 trillion New Taiwan dollars (US$ 1.12 trillion) with an average annual rate of 3.5 percent from Taiwan, which was simply incredibly cheap.

Experts believe that local debts are one of the main culprits in China’s money shortage. The local state-owned enterprises, with their ability to borrow from the banks, helped create this situation.

After the new round of leaders came to power, the local governments’ platforms of land and financing were taken back by the central government. As a result, many infrastructure projects’ funding was severely tightened.

Poverty gives rise to the desire for change. The poor, local state-owned enterprises transformed themselves into underground banks. Even the loans are operated in a direct marketing model, charging rates several times higher than the banks.

Therefore, a money shortage was destined to recur in the banks. This was also the main reason the People’s Bank did not want to inject money to ease the cash crunch.

In fact, the main problem is that People’s Bank’s financial resources are disconnected from the real economy. What’s most scary is the eventual destination for the money, which flowed into real estate, where the authorities least want it to go.

Real estate speculation not only is unhelpful to the economy, but also causes housing prices to soar up and mass real-estate developments to be built. It also increases a large variety of risks from a financial bubble, which is also a major obstacle to China’s industrial restructuring and financial system reforms.

The black hole of the local-government debt has made the official think tanks unhappy. But no matter how much debt the local governments owed, the local officials do not seem to worry about it at all, because they think it is not their money.

Some people said that China’s banks were all controlled by the governments and it’s impossible to let the banks collapse. In fact, the Working Conference of the Central Committee and the banking regulatory agency released signals in 2013 about establishing a deposit insurance system to prevent the worst-case scenario: people being unable to withdraw from the banks, investment products failing to pay, and eventually a bank panic developing.

Regardless of whether the money belongs to the state or to the banks, in the end it is the citizens’ money. Internet buzzwords have been describing the year-end accounting, “if you come out to play, you will eventually have to pay.”

No matter what kind of debt you owe you need to pay. If you put it off for too long, you will be unable to pay the loan, interest, and penalties. As a result, a burden will be imposed on future generations. How can those in power not think this over carefully?