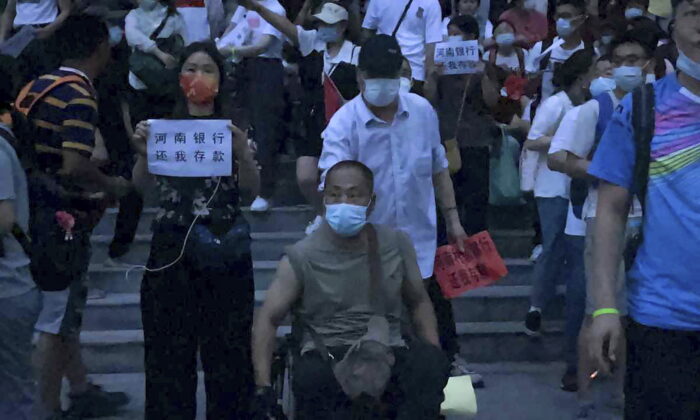 In this photo released by Yang on July 10, 2022, people hold banners stage a protest at the branch of China's central bank in Zhengzhou in central China's Henan Province. A large crowd of angry Chinese bank depositors faced off with police on July 10, some reportedly injured as they were roughly taken away, in a case that has drawn attention because of earlier attempts to use a COVID-19 tracking app to prevent them from mobilizing. (AP Photo/Yang)
China Business & Economy

China is going through a systemic debt crisis because of a lack of liquidity, according to China expert and author Gordon Chang.

In comments to NTD, the sister media outlet of The Epoch Times, he noted that 400,000 depositors reportedly weren’t allowed by some banks in China’s Henan Province to withdraw money.

“The [Chinese Communist] Party right now has no economic answers,” he said. “The country as a whole is in too much debt. And so this is an issue going forward.”

Chang pointed to a similar situation that occurred in Shanghai.

He said protests had taken place in front of the People’s Bank of China of Henan, which is the central bank, instead of at the region’s rural banks, where funds had been frozen by the state since April.

“So people understand that the crisis is not just any one institution, it’s a crisis, which is systemic,” he said.

Chang noted that the debt crisis extends to other parts of the economy, citing the defaults of several large property companies.

“Evergrande, for instance, had something like $305 billion in obligations. The other big property developers, although not nearly as indebted … basically can’t pay back their debts anyway,” he said.

“I suppose they could print money. But China already has an inflation problem. So that’s not going to be a long-term solution,” he said.

In Chang’s opinion, the regime has faced this financial issue for some time.

“It has been masked, because the Communist Party has been able to obtain money from the outside. It’s been masked because they’ve incurred debt,” he said. “But now, they are running out of room for what to do.”

Thus, Chang said he believes that could be a trigger for the failure of the CCP because “the Communist Party can’t come up with the solutions that would save it.”

He pointed to police violence against the depositors in Henan, saying it’s rooted in the ideology of the CCP.

“This is the typical playbook of the Communist Party: to intimidate, to use force,” Chang said. “The Party line is that ‘this money is not yours, it’s our money. And we’re going to do what we want with it.’

“So there’s a fundamental misperception between the people and the Party.”