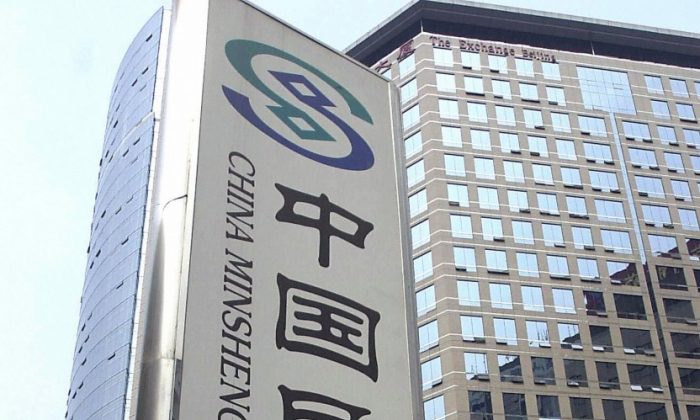 While the Chinese Communist Party’s (CCP) Banking Regulatory Commission announced at the end of February that the total assets of all joint-stock commercial banks in China stood at 23.9 trillion yuan, investors returned a vote of no confidence.

On March 28, bank shares plummeted in China’s stock market, reaching a new low for the past three months. The shares of nine banks fell more than 6 percent, with Industrial Bank down the most. Minsheng Bank released its annual report slightly later, claiming its assets had exceeded 3 trillion yuan, and the 2012 net profit had increased by 34.5 percent to 37.5 billion yuan.

The hidden risks concealed behind Minsheng’s report are worthy of concern, as investors look to long-term financial health rather than current profits. With the current rapid expansion of businesses, total risk-weighted assets (bad debts and non-performing loans) will also increase, putting the bank’s equity capital at risk. Minsheng Bank’s core capital adequacy ratio, which measures a bank’s financial strength, was 8.13 percent, which is less than the regulatory requirement of 8.5 percent. Of the banks that have published their annual reports, Minsheng’s ratio of capital to assets came in last.

Analysts say the rapid increase of Chinese bank assets was caused by continual credit expansion, which created the real estate bubble, inflation, and an increasing burden of bad debts. This is a major hidden peril in China’s economic growth. Dr. Frank Tian Xie, a business professor at the University of South Carolina Aiken, agreed with the assessment in an interview with The Epoch Times, adding that the large profit margin of Chinese state-owned banks is a result of state monopoly. He believes that the burgeoning bubble of the Chinese real estate market and inflation are casting a shadow on the prospect of a healthy, growing Chinese economy.

Studies by Sebastien Barbe, head of Emerging Market Research and Strategy at the French Credit Agricole Bank, have shown that China’s economic stimulus is mainly reflected in bank credit, and is very powerful but also very dangerous. He concludes that after the massive rise of credit assets for the past two to three years, the banks’ bad debt will increase rapidly. In the next few years, this phenomenon will become a major threat to economic development in China, he says.

The difference in rates on deposits and loans in China is the highest in the world, reaching 5 to 10 percent in some cases, while foreign banks’ differentials average around 0.2 to 0.5 percent. Chinese banks obtain cheap money (paying a basic interest of 3 percent) from depositors, and raise actual lending rates to borrowers (charging a benchmark interest rate of 6 percent) to create a huge interest rate differential.

Translation by Irene Luo and Sophia Fang. Written in English by Carol Wickenkamp.