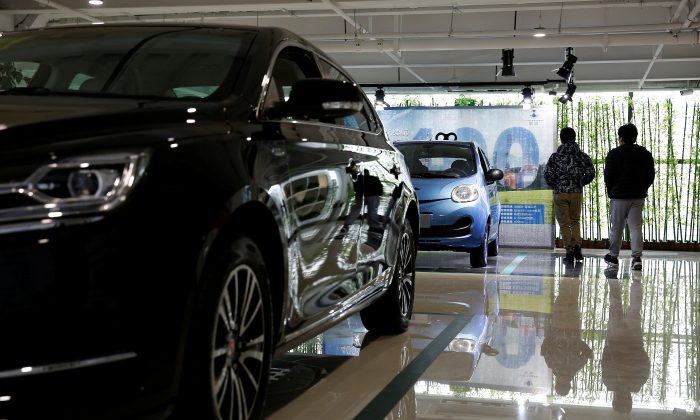 BEIJING/SHANGHAI–China’s auto sales could experience negative to low growth over the next three years, an official with the country’s top industry association said, after sales fell for a 14th consecutive month in August.

The number of new energy vehicles (NEVs) sold contracted for the second month in a row, data from the China Association of Automobile Manufacturers (CAAM) showed.

Total auto sales fell 6.9 percent from the same month a year earlier to 1.96 million, CAAM said on Sept. 11. This followed declines of 4.3 percent in July and 9.6 percent in June.

“The sales in the second half of the year should become better, but we are not sure to what extent the sales would be,” Shi Jianhua, senior official at CAAM said.

“Perhaps the next three years will be at a low or small negative growth. We’re all looking forward to sales picking up, but it’s normal if we don’t get that,” he said, adding the key reason for the poor outlook was low consumer confidence amid a economic slowdown and trade tensions with the United States.

As recently as three years ago automakers had enjoyed double digit annual growth in the world’s largest auto market, before the brakes came on with the first annual contraction since the 1990s last year.

China has been a keen supporter of NEVs and has brought in sales quota requirements for automakers.

CAAM said in July it expected auto sales to fall 5 percent year-on-year to 26.68 million vehicles in 2019.

It still expects sales of new energy vehicles to increase, but at a slower pace to 1.5 million, down from a previous forecast of 1.6 million.

China has been trying since January to boost consumption of a range of goods as the world’s second-biggest economy slows further amid a trade spat with the United States characterized by tit-for-tat import tariffs.

“We expect these measures will promote the consumption of autos in China,” Chen said.

The implementation of new vehicle emission standards earlier than the central government’s 2020 deadline by 15 cities and provinces, which account for over 60 percent of car sales in China, spooked buyers too and hurt sales—particularly of traditional-fuel vehicles—according to CAAM, analysts, dealers and consumers.

The prolonged sales decline has made local carmakers such as Geely Automobile Holdings Ltd. and Great Wall Motor Co. Ltd. cut expectations for sales and profit.

The decline has also prompted some global names including Peugeot SA to close plants and adjust workforce.

China is also re-instituting an additional 25 percent tariff on U.S.-made vehicles and 5 percent tariffs on auto parts that had been suspended at the beginning of the year. Carmakers such as Daimler AG and Tesla Inc. had adjusted their prices in China when the auto and auto parts tariffs were suspended.