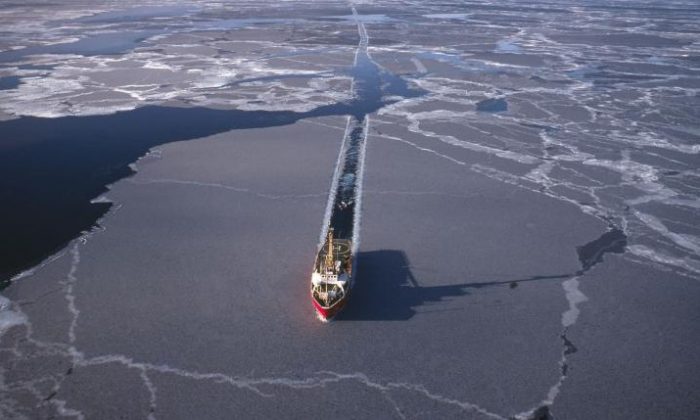 An icebreaker in the Arctic in this file photo. China has great plans to get involved in arctic strategy. (iStock Photo)
International

As part of Belt and Road, China is looking for a way to navigate the Arctic
By James Jay Carafano
Print

In 2017, the Chinese regime released a document titled “Vision for Maritime Cooperation Under the Belt and Road Initiative.” It included an idea for an Arctic link between China and Western Europe, complementing the regime’s other plans to construct infrastructure and trade routes connecting the country with Central Asia, the Middle East, and Europe.

China’s ambitions were further developed in a white paper released this January, which emphasized the importance of economic and scientific development in the Arctic strategy. And while there is global interest in Chinese investments in infrastructure, there is also growing concern.
Other players are concerned about Beijing’s strategic intent and whether the plans will be realized and deliver significant economic and strategic benefits to China or others. Nevertheless, Arctic nations are accounting for China’s policy in their own schemes for future developments in the region.

The addition of a great northern route to China’s One Belt, One Road (OBOR) initiative has prompted several assessments about Beijing’s intentions and its prospects for successfully developing a China-dominated Arctic pathway.

For instance, Heather Conley recently authored a report on the subject for the Center for Strategic and International Studies, an influential Washington-based think tank. The report concludes that China, which now describes itself as a “near-Arctic power,” would contribute to the development of the region.

Among the positive influences, she cites, are Chinese investments in the region in partnership with at least six countries, including the United States. In 2017, for example, China signed an agreement to invest in Alaskan LNG production.

However, others worry that China’s influence is not benign. As with the development of other routes in the OBOR, concerns include the possibility of “debt traps,” as was the case with Sri Lanka, which had to turn control of strategic ports over to Chinese state-owned companies after accumulating more than $1 billion in debt.

Other fears include growing Chinese political influence and strategic encroachment. Last year, for example, the Danish government repurchased a shuttered military base in Greenland that had been sold to a private buyer, out of fear that the Chinese regime might try to buy the facility.

Beijing’s demand for a more prominent role in Arctic governance has also unsettled the shaky equilibrium between nations in the region.

Polar cooperation has largely been directed through the Arctic Council. So far, the organization, which does not deal with security issues, has managed to balance the interests of its members.

Notably, acrimony with Russia over issues like Ukraine and Syria has not hurt the Arctic cooperation. A more assertive China introduces a new and potentially destabilizing dynamic. At the moment, China has observer status at the council.

Currently, there is too little activity to evaluate the impact of an “Arctic Silk Road” or China’s true long-term intentions. In 2016, for example, there were only 19 commercial polar crossings. That same year, more than 75,000 commercial vessels transited the Strait of Malacca between Malaysia and Indonesia.

Nevertheless, the prospects for economic development in the Arctic are growing. Finland and Norway are considering building an Arctic railway between Norway’s ice-free port at Kirkenes and the city of Rovaniemi in Finland.

The railway could link to north-south development projects under the Three Seas Initiative (a forum of countries between the Adriatic, Black, and Baltic Seas), creating a new corridor for energy, economic development, and trade through Central Europe. This corridor could well link to a hub on China’s Arctic route.

The United States, Canada, and the Nordic nations have responded to the potential of Chinese development in the Arctic with a mixture of openness to investment and caution against offering Beijing undue strategic leverage. Even Russia, which has also partnered with China on Arctic projects, has shown unease about seeing its dominance as a polar power leveraged or eclipsed by the Chinese.

The West has offered no coherent response to the Chinese investments in polar regions and Beijing’s demand to play a larger role in Arctic governance. Yet, there are signs of change, as there are worries about its destabilizing impact on the global order.

The most significant element is shifting attitudes toward China in Western Europe. Even as Beijing seeks to expand commercial ties and investments, governments are increasingly wary of Chinese influence.

This is partly reflected by Europe’s growing interest in instituting processes similar to those used by the Committee on Foreign Investments in the United States (CFIUS). Nordic governments are the most skeptical about China.

Even European Union representatives, in private conversations, press for more transatlantic deliberations and assessments of China’s long-term goals. In contrast, the United Kingdom stands alone among major European powers in its reluctance to let go of the presumption that China’s rise will be a benign influence on the continent.

Canada, a major Arctic power, takes its role and influence in the region seriously. However, it has yet to demonstrate any significant concern over Chinese polar activity. Canada claims sovereignty over proposed shipping routes mentioned in Beijing’s 2018 white paper.

The role the United States will play is pivotal but unclear. Last year, Washington completed its term as the chair of the Arctic Council. U.S. leadership, at the time, was indecisive.

The Obama administration seemed a bit out of step with the Nordic countries, which were more interested in sustainable development. The new U.S. administration has, so far, not established a clear direction for its Arctic policy.

It did recently complete an Indo-Pacific framework that addresses the OBOR overall. However, there is a lot on the administration’s plate at the moment.

There were significant changes in the national security team, while several near-term priorities will demand the National Security Council’s attention, especially North Korea and the July NATO summit. It is unlikely that we will see a decisive U.S. response to China’s Arctic pathway proposal anytime soon, although it could be packaged into a potential deal on trade.

No Leadership, No Pressure

In the near term, the most likely scenario is that the West will fail to make a coordinated response to China’s Arctic Silk Road. The United States will not provide decisive leadership, nor will other Arctic nations fully reconcile their desire for Chinese commercial investments and their national security concerns.

On the other hand, China is unlikely to make significant inroads by playing a more prominent role in the Arctic Council or influencing the behavior of the Nordic states, such as Iceland, Russia, or Canada. Still, there will likely be some piecemeal efforts foreshadowing a more structured national security response, including the expansion of CFIUS-like processes in Europe.

Canada will undoubtedly continue to object to NATO addressing the Arctic as a security issue. If and when China makes some definitive strides in the region, this attitude will change, as will the Arctic’s priority in the eyes of Western powers.

Dr. James Jay Carafano is the vice president for foreign and defense policy studies at the Heritage Foundation and director of the Kathryn and Shelby Cullom Davis Institute for International Studies. He is also an expert for Global Intelligence Services. This article was first published by GIS Online.