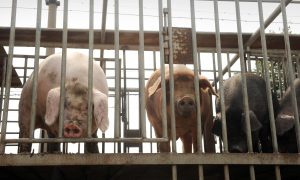 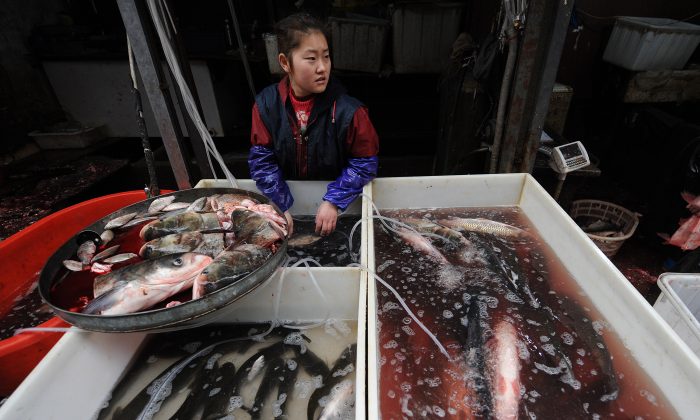 A Chinese seafood seller at a market in Hefei, Anhui Province, China on Dec. 23, 2010. A Chinese scientist has shed light on the abuses of antibiotics in China’s aquaculture industry. (STR/AFP/Getty Images)
China

“When I see those particularly huge fish, I don’t eat them,” he remarked at a March 7 meeting of the National People’s Congress.

“I’m concerned that the fish has a lot of antibiotics. I’d rather eat small fish,” he continued, in a session that took to task the entire industry of animal husbandry and aquaculture in China—and in particular the rampant abuse of antibiotics.

Rather than develop sustainable and genuinely healthy farming practices, Chinese growers often resort to antibiotics to fend off the bacterial infections that come from unsanitary conditions.

And they overuse them to such a degree that the microorganisms in animals begin to build up antimicrobial resistance—which makes the antibiotics meant to kill bacteria ineffective. This can then be transferred to the human body, posing a serious threat to global health.

The World Health Organization said that increase resistance to the effects of antibiotics is stopping prevention and treatment of an ever-increasing range of infections caused by bacteria, parasites, viruses, and fungi.

In China, abuse of the drugs also severely pollutes the waterways. They are discharged along with masses of animal fecal matter, polluting rivers and floating on the surface of bodies of water. Zhong Nanshan, the Chinese political figure, referred to a report from last year that said China’s surface water at the time contained 68 kinds of antibiotics in high densities—these include in the Pearl and Huangpu rivers, major waterways.

“If you drink water from those places, it’s the same as eating medicine,” Zhong said.

But government regulation over antibiotics is in disarray, he said. “Many agencies could manage it, but none will do it,” he said. “If we deal with the issue when it’s very serious, it will be too late.” Zhong appealed for higher levels of the government to step in and solve the problem.

Food safety has long been a major social and political problem in mainland China, with reports frequently in the press documenting rice and vegetables contaminated by heavy metals, or rotten and diseased pork made into bacon and sold on the market, among the more notable instances.

Internet users monitoring the discussion responded with desperation to Zhong’s remarks. A user calling himself “Western City Mr.13” wrote on the popular Sina Weibo social platform, “Is there anything safe we can eat!? Why is it so difficult to survive!?”