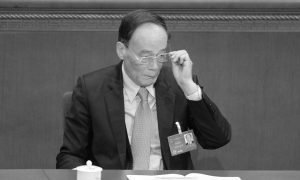 Despite speculation in overseas Chinese media and by many commentators that the Chinese Communist Party’s anti-corruption campaign is slowing down, the regime’s disciplinary chief just announced a new round of investigations to target key agents over the next year. Sectors that will be probed include a range of state-run media companies, the aviation and aerospace sector, state-run steel and electricity firms, and the hugely profitable state-affiliated weaponeers.

The news was announced at a meeting of central Party anti-corruption investigators on June 23, by Wang Qishan, the chief of the Central Commission for Discipline Inspection. He said that there must be “no let up” in “tightening Party discipline,” according to the state-run Xinhua News Agency.

“The country is governed by the rule of law, and the Party requires adherence to regulations,” said Wang. “Discipline comes before the law, and Party discipline is more severe than the nation’s laws.”

The earlier inspection of 92 areas, government departments, and work units revealed a weak, ill-disciplined leadership, and the situation is even worse in the state-run enterprises, Wang said.

Only by “finding the cause of the illness” and “arresting problems early and when they are small” can the “sick person be saved,” Wang said.

In the second round of discipline inspections, 26 industries and sectors—state-owned aviation, aerospace, rail, mail, weaponry, electricity—will be targeted. State mouthpiece People’s Daily is the most notable Party institution listed for investigation.

Chinese leader Xi Jinping’s anti-corruption campaign to take down “tigers and flies”—Party terminology for corrupt high and low ranking officials—has been the subject of much commentary and speculation since it began two years ago. It is widely acknowledged that Xi and Wang’s determination to root out corruption is in part a convenient front to the task of dismantling former Chinese leader Jiang Zemin’s extensive and influential political network—though they are also working to reduce malfeasance among the rank and file.

With the trial of purged former security czar Zhou Yongkang aired recently, and treated almost as a nonevent by the Party, several political commentators predicted that the purge is nearing its end. Xi may continue fighting corruption in general, they say, but the “tiger hunt” has effectively ended, according to some of the conventional wisdom.

Wang’s recent announcement, however, indicates that there may be more in store. Reports, rumors, and political leaks reported in the overseas Chinese press also suggests that the “tiger hunt” may be far from over. Among the named heavyweights as possible targets for elimination is Zeng Qinghong, a powerful former Politburo Standing Committee member, long known as the trusted henchman for retired Party boss Jiang Zemin.