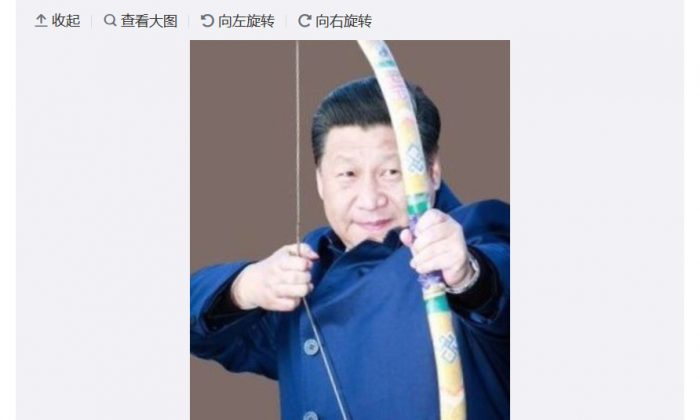 Since March 3 CCP two sessions kicked off, all indications that the two sessions was unusual at the same time mysterious Weibo account to issue Xi Jinping archery FIG. He comments that this figure pregnant with meaning, warning of opposites, Xi Jinping has been aimed at a target. There are also comments that the decisive moment, the arrow has been sent. (Internet Photo)
China

Many of Jiang’s high-ranking supporters have been investigated in the campaign. Epoch Times has secured an exclusive report that Zeng Qinghong, the former vice president of China and the second-in-command of Jiang’s faction, is under house arrest, while his brother Zeng Qinghuai is barred from traveling overseas.

The former vice chairman of the Central Military Commission (CMC), Guo Boxiong, has been handed over to prosecutors. Guo is another supporter of Jiang.

On top of that, it is rumoured in Shanghai that Jiang’s two sons, Jiang Mianheng and Jiang Miankang, are being internally controlled by the Central Commission for Discipline Inspection (CCDI).

U.S.-based China expert Ji Da believes that Guo’s being handed over to prosecutors is a prelude to the arrest of Jiang and Zeng Qinghong.

Ji Da told Epoch Times that the Zeng brothers are in the soup. Zeng Qinghong is not only under house arrest in Beijing, but also forbidden from travelling overseas, like his brother. His brother was previously rumored to have been arrested.

Zeng’s son Zeng Wei is in Australia, while his daughter Zeng Baobao has been absenting herself from sales reports presentations in Hong Kong.

Zeng Qinghong, 76, is the Jiang faction member who used to run Hong Kong. Sources close to the government say he plotted the coup to overthrow Xi and played a major part in the conspiracy to assassinate him.

As an official and commissioner in Hong Kong under the regime’s Ministry of Culture, Zeng Qinghuai was active in the political, business, and cultural circles of Hong Kong and mainland China. He collaborated with the former vice president of China Central Television (CCTV), Li Dongsheng, to source pretty women for high-ranking officials.

The corruption cases of CCTV and tycoon Che Feng are both linked to the Zeng family.

It is believed that the Zengs are the next target in the anti-corruption campaign. Zeng Qinghong’s niece Wang Xiaoling was removed from office as the vice-mayor of Guangzhou and the secretary for disciplinary inspection at the end of last year.

At the beginning of this year, the state media again stated that nobody is exempted from the anti-corruption campaign, implying that Zeng Qinghong would be under probe.

According to a Beijing inside source, Zeng’s secretary Shi Zhihong and former Hong Kong Chief Executive Tung Chee-hwa recommended to Xi that Leung Chun-ying should be the Chief Executive of Hong Kong.

The source said that Zeng thought it was easy to manipulate Xi, but little did he expect that Xi would crack down on the allies of the Jiang faction, striking fear into the gang.

The source predicts that when Jiang and Zeng are removed, Leung will be punished as well.

Shanghainese lawyer Zheng Enchong said he learned from a reliable source that Jiang Mianheng and Jiang Miankang are under internal surveillance. Their crimes have been thoroughly investigated and their assets frozen.

It is only a matter of time before the scandal is exposed, the CCDI is coming down harder on the Shanghai clique, and Jiang’s allies are terrified Zheng said.