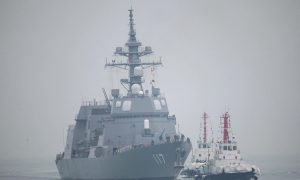 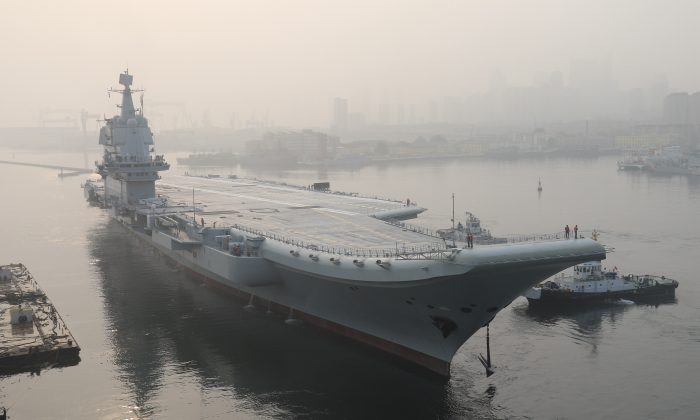 China's first domestically manufactured aircraft carrier, known only as "Type 001A", leaves port in the northeast city of Dalian early on May 13, 2018. AFP/Getty Images
Viewpoints

It’s been a long time coming, but Japanese reports on June 11 revealed that the Chinese Communist Party (CCP) and its People’s Liberation Army (PLA) have realized a long-held ambition: to build and deploy an aircraft carrier battle group.

That means that China’s People’s Liberation Army Navy (PLAN) isn’t just able to deploy an aircraft carrier with a working air-wing of combat aircraft, but this carrier is also protected by escort combat ships and sustained by large, fast replenishment ships. This allows the carrier to undertake offensive missions against adversaries, while escort ships carry the burden of defending the carrier.

Also on June 11, the Japanese Ministry of Defense reported that a PLAN aircraft carrier battle group had cruised past the strategic Japanese island of Okinawa and was on its way to the Miyako Strait to depart the “First Island Chain.”

So deployed, this PLAN carrier battle group could assist blockade or strike operations directed at the eastern side of Taiwan. It also could assist attacks against the southern islands of Japan’s Ryukyu island chain, which might host combat aircraft and anti-ship missiles to disrupt attacks against Taiwan.

At the center of the group is the PLAN’s first aircraft carrier, the Liaoning, which, in January 2019, emerged from a period of maintenance and upgrading of its electronic combat systems. This 58,000-ton carrier was first purchased uncompleted from Ukraine and towed to China, reaching the port of Dalian in March 2002. A cover story was hatched that it was to be converted into a casino, but by 2005–2006, its reconstruction had begun in earnest, and by 2012, Liaoning was commissioned and was testing its new Shenyang J-15 carrier fighters.

Liaoning can carry 20 to 25 J-15s, an improved copy of the Russian Sukhoi Su-33 carrier fighter. While its range and payload are slightly limited because it’s launched via a “ski jump” instead of a catapult as on U.S. carriers, it’s a respectable fourth-generation fighter, which will be improved. Liaoning also carries about 12 large Z-18 helicopters equipped for anti-submarine and early-warning radar missions.

A second PLAN carrier, modeled on Liaoning with slight modifications, is in advance trials. It may soon begin testing with J-15 fighters and could be commissioned in one or two years.

On June 12, the South China Morning Post cited the People’s Daily social media account Xiakedao saying, “It is very unlikely that Chinese carriers will ever be involved in resolving maritime disputes with neighboring countries.” Such statements are not credible.

Also, while the Liaoning carries fewer aircraft than a U.S. carrier (up to 90), the PLAN can today compensate for its weakness—both in carrier battle groups and in carrier aircraft—with weapons the U.S. Navy doesn’t have today.

For example, in January, the PLAN held exercises in the South China Sea with the PLA’s new Rocket Force. PLAN ships, and perhaps submarines, coordinated simulated strikes with the Rocket Force’s medium- and intermediate-range anti-ship ballistic missiles. In addition, the PLA Air Force is testing a new medium-range air-launched ballistic missile, most likely carried by Xian H-6 medium bombers. The PLA will first try to sink U.S. Navy carriers with long-range ballistic missiles, coordinated with strikes by land-based aircraft, submarines, and then aircraft carriers and ships.

Replenishment ships of this size can support global deployments for the PLAN’s carrier battle groups. In the next one or two years, it should be expected that the PLAN carrier battle groups may deploy into the South China Sea, the Indian Ocean, or to advance China’s naval diplomacy in the South Pacific. They also will be calling into ports in Africa and Latin America before long.

In the 2002 issue of the congressionally mandated Department of Defense “China Military Power Report,” on page 20, it was stated that “while continuing to research and discuss possibilities, China appears to have set aside indefinitely plans to acquire an aircraft carrier.”

Such an ingrained tendency to downplay the intentions and capabilities of the People’s Republic of China likely is reinforced by a hubristic susceptibility to PRC deception and denial efforts; both flaws are costly and must be corrected. The United States should expect that China will deploy many carrier battle groups to challenge global American interests, and Washington must both develop forces to counter them, and begin developing new weapons systems to succeed the aircraft carrier.

Richard D. Fisher is a senior fellow with the International Assessment and Strategy Center.