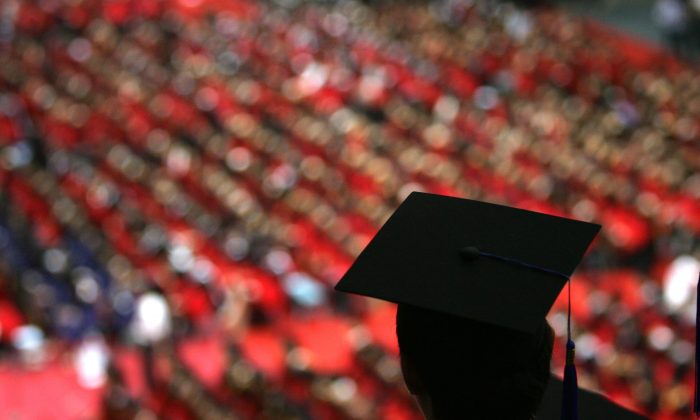 China’s Ministry of Education recently announced a plan to clean up academic research projects, revealing the problem of corruption in the field of higher education.

More than 1,400 research projects in the humanities and social sciences are past their completion deadlines and will have their allocated research funding revoked, and the project coordinators will be banned for three years from applying for new research. Authorities also have initiated investigations into misused funds, according to a July 13 report by state-run media Xinhua.

Subsequently, Chinese media uncovered that those 1,453 projects were approved in 2013 and make up nearly half of the total number of approved projects that year. The incomplete initiatives included prestigious universities and scholars, such as Peking and Tsinghua universities.

The Ministry of Education ordered these projects to be finished by Sept. 30, but they can apply for a maximum postponement of one year. Those that don’t make the deadline will have their projects canceled.

Corruption involving academic funding has persisted for years. As recently as 2014, Chinese media exposed the problem, revealing common ways funding is mishandled, such as researchers using the money to “reimburse” their personal expenses—including buying houses and cars; getting kickbacks when buying research equipment; establishing their own companies and using the money to buy their own stock; and going on overseas trips in the name of “conducting research” but actually vacationing. As long as a receipt is presented, expenses are covered.

There are several high-profile cases of professors and officials being punished for their corruption.

Chen Yingxu, the former director of an environmental research institute at Zhejiang University, was awarded more than 100 million yuan (about $14.7 million) for a project to research methods on how to reduce water pollution. In 2014, he was found guilty of making false budget estimates, submitting fake receipts for reimbursements, and swindling close to 90 million yuan. He was sentenced to 10 years imprisonment.

In 2012, Duan Zhenhao, a former candidate for academician at the state-run Academy of Sciences, was found guilty of using research funds to pay for the living expenses of his mistresses. He was sentenced to 13 years imprisonment.

Some researchers target fields that the Chinese regime has heavily invested in, so they can cash in on the huge sums gushing in, including research in genetically modified organisms (GMO). In 2014, as the state poured hundreds of millions of yuan annually into researching GMOs that can help improve crop yields, Li Ning, a professor of biology at China Agricultural University, was taken away by the authorities on charges of funneling vast sums of official grants into his own side businesses.

A former Peking University professor Chen Pingyuan explained the reason why so many academics turn to such unsavory behavior. In a 2013 interview with Phoenix TV, a Hong Kong-based broadcaster, he said: “Chinese university professors have low salaries. Yet they can apply for huge sums of rewards via research funding.”

In January 2018, an online post by an unnamed professor at a Chinese university went viral after the instructor revealed that his monthly salary—after deductions for health insurance and other costs—came out to just 900 yuan (about $130).

Some universities have sought to tighten supervision of research funds, but encounter the problem of project coordinators being local Party cadres. An October 2014 article by Xinhua explained that local Party leaders would allocate state funds to a university in exchange for the school granting the official an academic degree to boost their credentials—encouraging corruption via such quid pro quo arrangements.

Indeed, in some cases, it is the officials that encourage cheating. In Guangdong Province, Li Xinghua, the former director of the science and technology bureau, was found guilty of accepting bribes from a number of science and technology firms in exchange for giving them state grants meant for assisting in research.

The grant money oftentimes ended up in the firms’ own pockets, in the hands of Li’s son, or as Li’s shares in the firms, according to the Chinese Communist Party’s anti-corruption watchdog. Li accepted a total of 19.9 million yuan (about $2.9 million), HK$1.1 million (about $140,000), and $30,000 in bribes. The funding he allocated totaled 270 million yuan (about $39.7 million). In April 2017, he was sentenced to life imprisonment.