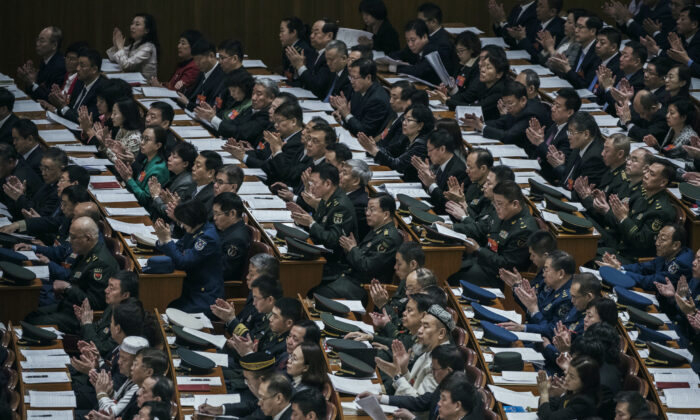 Delegates applaud during the third plenary session of China's rubber-stamp legislature (the National People's Congress) at the Great Hall of the People in Beijing on March 12, 2019. (Kevin Frayer/Getty Images)
Thinking About China

China concluded its four-day 6th plenum of the 19th Central Committee of the Chinese Communist Party on Nov. 11. The plenum issued a communique, which praised the Party’s “major achievements and historical experience” over its 100-year history. Upon close inspection, the communique is just a propaganda campaign.

The plenary session is the last meeting before the party congress in 2022, China’s most anticipated political event. The 20th party congress will mark the beginning of the second centenary of the establishment of the CCP, which will involve a reshuffling of senior officials, with Xi Jinping seeking a third and perhaps life-long term. Party congresses are held once every five years. Plenums, or plenary sessions, are held in the intervening years.

The communique boasts “new major achievements” of the CCP in the past year, and claims that socialism (with Chinese characteristics) is the only system that can save China.

However, the communique is just another CCP propaganda campaign to deceive the Chinese people and the world.

The communique states that, despite the COVID-19 pandemic and the “complex and grave external environment,” the CCP’s Politburo (the top decision-making body) has managed to “accomplish new major achievements” that include the following:

Under Xi, did the CCP really accomplish all of the above?

Let’s take a look at the “achievements” mentioned in the communique and compare them to the real situation in China.

The CCP’s initial coverup of COVID-19 has brought disasters to China and the world. Instead of experiencing “a good economic momentum,” China suffers a major setback.

To conceal the economic crisis, the CCP does not dare to release the actual number of bankrupt Chinese enterprises and its unemployment data.

The South China Morning Post, however, disclosed in April 2020 that over 460,000 Chinese companies “closed permanently” in the first quarter of last year.

On top of that, the CCP has recently been cracking down on various sectors, such as the internet, finance, education, and real estate, further deteriorating China’s economy.

China is also facing an energy crisis. Various cities in China have been experiencing blackouts and power cuts. Factories are forced to ration electricity and even shut down operations. This has disrupted not only China’s manufacturing sector, but the global supply chain as well.

“Xi’s crackdown on ‘everything’ is destroying China’s economy,” according to China economic analyst Antonio Graceffo.

China has never been self-reliant in its development of science and technology. It has been stealing intellectual properties–first from the Soviet Union, and then from the United States and other Western countries in the past decades.

FBI Director Christopher Wray said on July 7, 2020, that the FBI was “opening a new China-related counterintelligence case about once every 10 hours.”

Reform and Opening Up

Since the CCP took control of China in 1949, it ruined the country’s economy with political campaigns that suppressed the private sector.

The weak economy threatened the CCP’s legitimacy and it was desperate to hold on to power. Thus, in 1978, the CCP began to invite foreign investment and companies to China.

After China’s reform and opening up, former U.S. President Bill Clinton proposed to have China join the World Trade Organization (WTO), and believed that the CCP would agree to “import one of democracy’s most cherished values, economic freedom.” China joined the WTO in December 2001.

However, experts say that the Chinese regime has been “taking advantage” of the WTO for the past two decades, it has “not lived up to its commitments,” and it has “no will to change” its predatory trade practices.

Now it appears that China is heading toward closing its economy. In 2020, Xi urged the implementation of an “internal circulation” economic policy, which means the country is self-sufficient and mostly relies on domestic markets to provide goods for the country’s population, from raw materials to manufacturing. This contradicts the communique’s “further advancement of reform and opening up.”

The regime claimed to have eliminated poverty in China, according to a report released on Sept. 28—which is regarded by critics as a political propaganda campaign. China’s extreme poverty line is set at a per capita annual income of $620, or $1.69 per day at current exchange rates; while the World Bank’s international poverty line is $1.90 per person, per day for the world’s poorest nations.

The high unemployment rate and low consumer spending reveal that poverty has not been eliminated. Furthermore, Beijing will soon roll out a pilot property tax plan, which would further impact the middle-class citizens. The Chinese peoples’ livelihood has not improved—it is getting worse. And this could negatively impact social stability as many people struggle to make ends meet.

China is the second largest military spender in the world, after the United States. China’s military spending for 2020 was $252 billion. It has been building up its military for the past 26 consecutive years.

Despite the huge military budget, China copies and steals its military technology from countries like the United States, Russia, and EU countries. Chinese-made aircraft has engine failures and problems.

The Liaoning, China’s first-ever aircraft carrier, was dispatched for combat exercise training in April this year, but it was stuck for three days in China’s southern Hainan Island. It was rumored that it had to do with the ship’s engine.

The EU decided to freeze the Comprehensive Agreement on Investment (CAI) with China in May over the CCP’s sanctions on several European entities and political representatives and the EU’s concerns of the human rights situation in China.

Lithuania pulled out of Beijing’s “17+1” platform, the CCP’s effort to engage Central and Eastern European countries.

“This [17+1] format was accompanied by divisive tendencies in the EU and greater political pressure from China,” said Lithuanian Foreign Minister Gabrielius Landsbergis on May 22.

The growing China threat has affected diplomatic relations with Japan, the United States, Canada, and Australia.

Since last year, severe flooding has wreaked havoc in various parts of China, killing thousands of people and destroying homes. The communique, however, states that the CCP was successful in dealing with “multiple severe natural disasters.”

Wang Weiluo told The Epoch Times that there are at least 98,000 reservoirs and dams in China, accounting for half of the world’s total.

“There is no river in China without reservoirs and dams,” said Wang, and he pointed out that 40 percent of them are dangerous due to poor design and construction, and lack of maintenance. “These are time bombs that may explode at any time,” he said.

In July, in Zhengzhou of China’s central Henan Province, floods inundated one of the city’s subways, trapping hundreds of passengers. A major expressway tunnel was flooded, trapping drivers and passengers who did not have time to get out, as the water level rose too quickly.

The actual death toll is still unknown. Local officials did not do much to help residents, nor were they held accountable for the disasters.