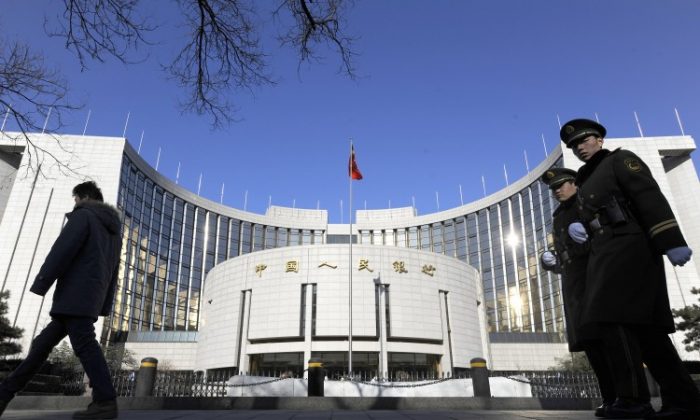 Two Chinese paramilitary police officers (R) patrol in front of the headquarters of the People's Bank of China in Beijing on Dec. 9, 2011. (Liu Jin/AFP/Getty Images)
China

China’s $3 Trillion in Foreign Reserves: A Blessing or Curse?

China’s perceived economic invincibility often rests on the fact that the People’s Bank of China has accumulated $3 trillion in foreign currency reserves: in theory, this massive amount of wealth should insulate China from economic shocks. Yet many experts at home and abroad believe that the assets could instead be a losing position.

With the beginning of new economic policies in the beginning of the 1990s, China boosted its holdings of U.S. treasury debt from $200 million in 1989 to $1.17 trillion by November of 2012, according to data from the treasury. But U.S. official debt only accounts for one third of the $3.3 trillion in foreign assets that the PBOC holds on its books. According to Chinese state media, 70 percent (or $2.3 trillion) are invested in U.S. dollar assets. Apart from treasuries, this includes U.S. agency debt, U.S. corporate debt, and U.S. equities.

The rest is invested predominantly in euros (20-30 percent), pound sterling, and Japanese Yen (0-10 percent). The central bank accumulated those assets during the 1990s and 2000s when the Chinese currency was pegged at 8.28 renmimbi (or yuan) to the dollar, and China was running huge trade surpluses with the United States.

This meant that whenever U.S. importers wanted to pay Chinese exporters for their products, they could not buy the Chinese currency they needed on the open market. Instead, the PBOC printed yuan in exchange for dollars, to keep the exchange rate stable and exports competitive.

For the first leg of the trade, this policy worked well. Chinese exports remained cheap on the world market because of the dollar-peg, and the economy continued its rapid growth. Meanwhile, China was accumulating the safest and most liquid assets in the world: U.S. treasuries. While the PBOC owns these assets, it is the State Administration of Foreign Exchange, within the PBOC, that manages them. This little-known agency often pops up on the world economic radar, for example when distressed assets in Greece go on sale.

In a recent report in People’s Daily, the mouthpiece of the Chinese Communist Party, economist Xiang Songzuo points out that the regime’s reserve assets look good on the books, but not so good when considering returns after inflation: “China’s holdings of U.S. debt and dollar assets are suffering huge losses every day. The book value has not changed much, but their real purchasing power has dropped sharply and is still declining steadily. Maybe 10 years from now, our over 3-trillion-U.S.-dollar foreign exchange reserves may be worth less than 300 billion U.S. dollars.”

Xia Bin, Director of the Financial Research Institute of the Development Research Center of the State Council, also said that China is worried about the U.S. Treasury securities it holds, due to the long-term depreciation of the dollar. If the exchange rate of the dollar declines further, it poses a threat to China’s huge foreign exchange reserves, they fear.

Looking at the exchange rate alone, China has lost 25 percent on its dollar holdings since 2005, as the yuan steadily appreciated from 8.27 to the current roughly 6.22 per dollar. This is partially mitigated by a strong performance of 10-year U.S. treasury notes, which returned a total of 35 percent from 2005 until 2010, according to data compiled by Global Financial Data Inc.

In recent years, the United States and Europe accelerated their programs of monetary easing in order to prop up their economies and financial systems. The U.S. had already implemented QE1, QE2 and QE3, three rounds of “quantitative easing,” otherwise known as money-printing. The Fed buys up treasuries and mortgage securities by printing money and pushing it into the financial system.

These programs normally lead to depreciation in the value of the currency, thus putting a strain on the rate of the renmimbi versus the U.S. dollar. They also lead to an increase in inflation, which damages the real return of fixed income securities such as Treasuries.

Similar to the U.S., the European Central Bank has also announced an Outright Monetary Transactions (OMT) program, where it will purchase government-issued bonds that mature in one to three years, but only if member countries apply for the program under certain conditions. There is no time or quantitative limit for purchases under the program; so far no member country has applied for the assistance.

Troubles on Both Sides

Given the strong returns of treasuries in the recent decade, China could theoretically simply sell these holdings and reap a decent profit. In practice, it’s more complex.

Most analysts believe it cannot move such a large quantity of money without causing huge distortions in the marketplace. First, by reducing its foreign exchange holdings, China must buy back the yuan it had issued before. This will lead to a rise in the yuan versus the dollar, further increasing the losses on the exchange rate alone. In addition, by pushing the yuan higher, the PBOC will put a strain on already struggling Chinese exporters.

Second, while China has underpinned the demand for treasuries in the recent decade, thereby providing a floor for the price, the dumping of a large amount of treasuries will reduce their price, impairing the remainder of unsold holdings. The accumulation of gold through Hong Kong is a sign that the PBOC knows that it needs to diversify its assets, but it can only move so much money at a time.

Dr. Frank Tian Xie, a professor at the University of South Carolina Aiken business school, says that China does not need such a large foreign exchange reserve. The foreign currency it generates through exports can be left with the people to help building wealth in the private sector. A higher yuan rate also means that China can import goods more cheaply, reducing the rate of inflation. High inflation and a variety of other policies that undergird the regime’s foreign exchange approach end up impacting the lower and middle classes the most.