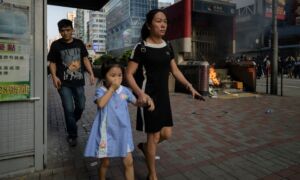 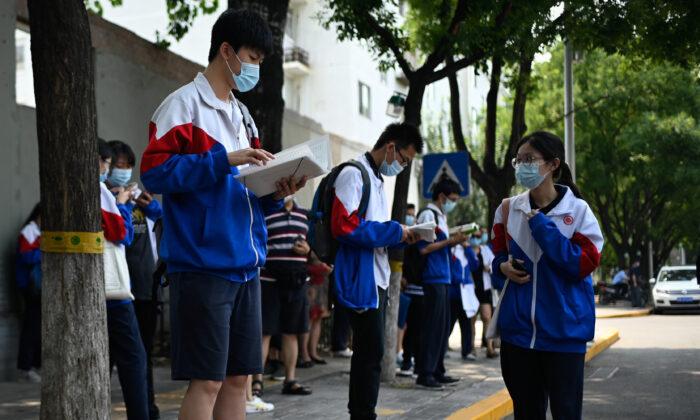 Mask-clad students conduct last-minute studying before sitting for the second day of the National College Entrance Examination (NCEE), known as "gaokao", in Beijing on July 8, 2020. According to “China’s 2020 Fertility Report” published by the Evergrande Research Institute, on average, education was 32.44 percent of the total expenditure for Chinese families in 2020, showing a rising trend. (Photo by WANG ZHAO/AFP via Getty Images)
Social Issues

Despite the Chinese Communist Party’s (CCP) recent introduction of a three-child policy to counter the country’s aging population, most families are unlikely to have two children, let alone a third child, due to the high costs of raising a child in China.

The CCP’s Health Commission stated on May 31 that “after it introduced the two-child policy, a large portion of families still decided not to give birth despite wanting another baby.”

The commission, citing a survey, suggests that the top three reasons were “heavy financial burden,” “unattended child” (meaning parents are unable to spend the time to take care of young children), and “difficulty balancing family and work.” Among them, “heavy financial burden” was the primary reason, for 75.1 percent of the families. More than half of families surveyed were also concerned about having an “unattended child.”

On June 22, the mother of a 12-year-old in Hangzhou, Zhejiang Province, released a summary of her expenses in a social media post.

The mother’s expenditure is typical of those of China’s middle class. Considering factors such as income gaps between urban and rural, rich and poor, even fewer people can afford to raise more than one child.

“The cost of education is the highest of all expenditures,” according to “China’s 2020 Fertility Report” published by the Evergrande Research Institute.

The report stated, “When reviewing their yearly financial data, these parents lamented that the difference of a baby could take you from middle class to bankruptcy.”