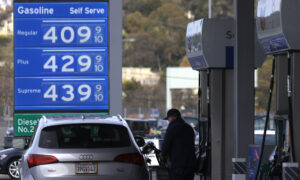 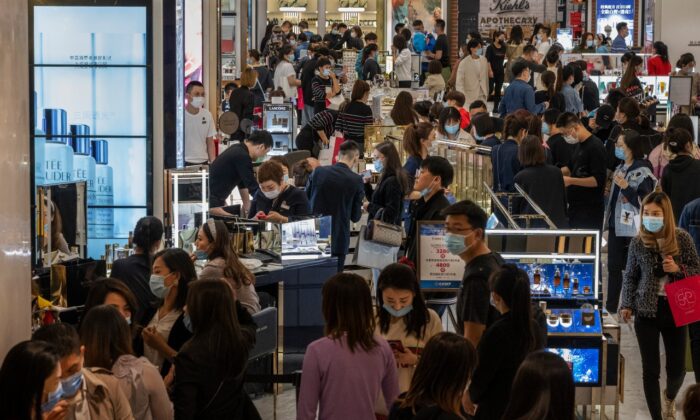 Shoppers and staff in a cosmetic store at a mall in Beijing on April 18, 2021. (Kevin Frayer/Getty Images)
China Business & Economy

China is looking to put a dent in the global commodities boom of 2021.

A rebound in the world’s biggest economies following the CCP (Chinese Communist Party) virus outbreak has caused a spike in global demand for materials, causing prices to skyrocket in 2021. The Refinitiv/ CoreCommodity CRB Total Return Index has returned 19.8 percent year-to-date and has returned 55.8 percent from the recent low recorded on May 27, 2020.

China, being the world’s second-largest economy and biggest exporter of finished goods, has consumed record amounts of raw materials since the second half of 2020 as global demand for products such as furniture, exercise equipment, and appliances has increased.

The country has had to contend with higher prices of commodities such as oil, iron ore, coal, as well as agricultural products such as corn. The high costs are threatening to inflate prices and choke consumer demand.

Chinese companies such as appliance makers Midea Group Co. and Haier Electronics Group Co. are increasing prices due to higher material, labor, and transportation costs, according to CCTV. Other global companies such as Proctor & Gamble—which makes Tide laundry detergent and Pampers diapers—have also announced that they would pass on the higher costs to consumers.

In the recent week, Beijing has issued a few warnings and actions to curb runaway commodity prices, and hope in turn to lower consumer prices.

Beijing will more closely manage the supply and demand of various commodities to rein in “unreasonable” price increases, China’s State Council (cabinet) said on May 19.

Immediately following Beijing’s announcement, the price of key steelmaking raw materials such as iron ores and coking coal, declined by more than 5 percent on May 20. Steel products such as rolled coils and rebars also declined.

China’s producers price index (PPI), which measures the price movements of manufacturers and mining companies, has been rising in 2021 after declining for most of last year. The PPI rose 6.8 percent in April year-over-year, the largest monthly jump in more than three years.

In comparison, the consumer price index (CPI), which measures the price movements of consumer goods and services, has not yet caught up. April CPI rose 0.9 percent year-over-year, which is a bit higher than the March pace but nowhere close to the PPI growth.

It remains to be seen to what extent the PPI increases will show up in CPI. There’s some correlation, as higher upstream prices in materials and chemicals will eventually be passed down downstream to consumers through higher prices for everyday products. But the correlation is not perfect and there are other factors that influence consumer prices.

And that’s what Beijing is banking on. The People’s Bank of China (PBoC) is looking to calm the concerns that higher commodity prices will equate to higher consumer prices, stating that imported commodity inflation is “largely controllable.” Higher factory prices should stabilize after production capacities recover and the supply of goods increases.

“The increase in international commodity prices is unlikely to cause imported inflation in China so long as there is no excessive domestic demand,” the PBoC stated in a policy note on May 18. “We don’t think there is basis for long-term inflation.”

There are also inflation concerns in the United States, driven by fears of an overheating economy coming out of pandemic lockdowns and too much liquidity as a result of unprecedented fiscal stimulus measures and lax monetary policy. So far, the U.S. Federal Reserve has not announced any overt actions to quell inflationary concerns.

What else can China do to rein in possible inflation?

There are a few levers it can pull. But Beijing’s hands are somewhat tied due to ongoing policies on pollution and trade that have contributed to recent supply constraints. While China has just recently worked to increase production, CCP leader Xi Jinping has reduced steel and aluminum production overall as a way to reduce emissions. China has also recently cut planned purchases of coal and copper from Australia due to deteriorating trade issues.

Assuming those are solvable issues, Beijing could begin by reining in China’s commodities exchanges. The busiest commodity exchanges in Dalian and Shanghai can raise margin requirements and crack down on speculation.

The CCP can also manage its existing commodity stockpiles. It can cure the metal supply constraint by releasing aluminum and iron stockpiles. In addition, Beijing can manage potential food and animal feed shortages by proactively building up and releasing agriculture stockpiles. China already has huge corn reserves from massive purchases made from the United States and other nations during 2019 and 2020.

Lastly, China can rein in debt sales funding infrastructure and real estate developments to curb demand for industrial goods. But such actions have an unintended consequence of reducing the nation’s GDP.

Regardless, it seems high prices are here to stay in the foreseeable future. We expect “most commodity prices to not embark on downward trajectory until after 2021,” Morgan Stanley Greater China analysts wrote in a note to clients on May 11.