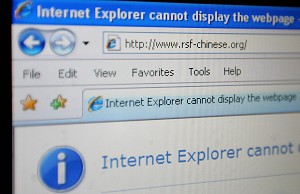 BEIJING—China will not guarantee it won't censor the Internet over this summer's Beijing Olympics, nor can it guarantee to stamp out piracy of Olympic-branded goods, officials said on Thursday.

Wang Wei, executive vice president of the Beijing Olympic organisers, had promised media would have “complete freedom” to report during the event, but rights groups have regularly criticised China's commitment to that pledge.

China maintains a tight grip over the Internet, whose use is exploding in the world's most populous nation, preventing access to sites it considers anti-government, such as those of the banned spiritual group Falun Gong or Tibet independence groups.

“China has always been very cautious when it comes to the Internet,” Technology Minister Wan Gang told a news conference as the Olympic torch was being paraded atop Mount Everest.

“I've not got any clear information about which sites will be shut or screened. But to protect the youth there are controls on some unhealthy websites.

“We will guarantee as much as possible” that sites will not be blocked over the Olympics, he added. “Every country limits access to some websites. Even in developed countries not every site can be accessed.”

As part of China's plan to hold a “high-tech Olympics”, broadband wireless Internet services will be widely available, according to a handbook issued at the same news conference, to ensure “convenience for journalists (and) promptness of news”.

Last week, the United States said again it was concerned about Internet controls in China.

“We would hope that people in China would be able to have access to all forms of information that are out there, including those that are available online. And that would apply to those who are full-time residents of China as well as those who might be visiting for the Olympics,” said State Department spokesman Tom Casey.