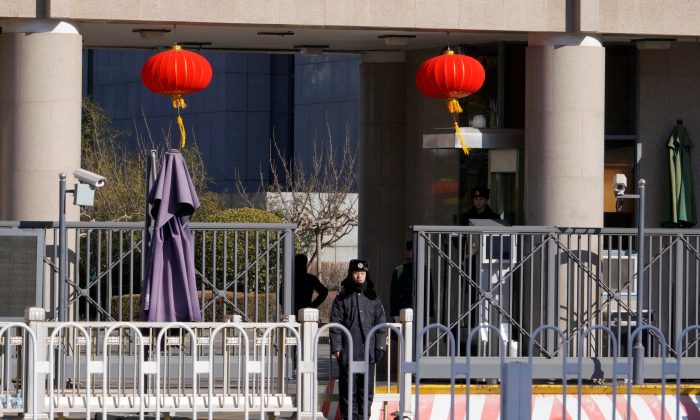 China Will Prosecute Graft, Terror Suspects Even if They Flee

BEIJING—China changed its law on Oct. 26 to allow judgments to be delivered in corruption and terror cases even when the suspects do not appear in court, as Beijing ramps up pressure on dozens of suspected criminals hiding overseas.

Xi has waged war on graft at all levels of the ruling Communist Party and has pledged that the fight must continue until corruption is impossible and unimaginable for officials.

Xi has also been cleaning house within the military (People’s Liberation Army or PLA) to purge any remaining influences of Jiang and his faction. The campaign has seen the jailing or punishment of hundreds of thousands of officials and also brought down dozens of senior party and military officials.

The campaign has spread beyond China’s borders to graft suspects who have fled abroad, though efforts have been hampered by suspicion among Western nations uneasy about handing over suspects to a system they believe might not provide a fair trial.

Now an amendment to the criminal procedure law by China’s largely rubber-stamp parliament will strengthen the overseas graft and terror fight by allowing judgments to be delivered in cases involving absentee suspects, a senior lawmaker said.

Wang Aili, director of the Criminal Law Office with parliament’s Legal Affairs Commission, told a news briefing that those who could be tried in absentia would include corruption suspects and those wanted for harming national security or for involvement in terror cases.

To qualify for a trial in absentia, there should be a time-sensitive urgency in handling the case and the top prosecutor would need to approve it, Wang said.

A copy of the subpoena would also need to be sent to the defendant to guarantee their “right to know,” he said.

A suspect can be defended in court in such “default judgment” cases, even if they are not there, by a lawyer, who can be chosen by the defendant’s close relatives or have one assigned by the state, the official Xinhua news agency said.

Once the judgment is issued, the defendant and their close relatives can appeal to a higher court, Xinhua said.

In April 2015, authorities published a list of 100 “most-wanted” graft suspects believed to be hiding overseas, many in the United States, Canada and Australia. More than half have come back to China, some voluntarily.

China has turned up the pressure on graft suspects overseas by asking their family members to contact them and encourage their return, as well as by releasing personal details about the individuals, including their addresses.

The change comes after China passed a new supervision law in March and set up a powerful anti-graft commission to extend the graft fight to all state employees, whether party officials or not.

The new system and law weaken rights protections for suspects by entrenching the use of controversial detention and questioning techniques that can allow abuse or torture, rights groups and legal experts have said.

China is also in the midst of tightening its security laws having passed a tough counter-terrorism law in late 2015, mostly to combat what it says is a serious threat from radical Islamic terrorists in its far western region of Xinjiang.

However, the ruling Communist Party has used the excuse of potential Islamic threats, “extremism,” and ethnic riots to crack down on the Uyghurs and other Muslim minority groups in Xinjiang.

Over the years, hundreds, possibly thousands, of ethnic Uyghur Muslims have escaped the unrest by traveling clandestinely via Southeast Asia to Turkey.

In February, Reuters reported that Malaysia was under great pressure from China to deport a group of Uyghurs that were detained and charged for illegally entering the country. Some Western missions sought to dissuade Malaysia on the transfer to China, which has been accused of persecuting Uyghurs.

Earlier this month, Malaysia has freed from detention 11 ethnic Uyghurs who fled to the southeast Asian nation after a Thai jailbreak last year, and sent them to Turkey, disregarding China’s request to hand them to Beijing.

The Uyghurs in Malaysia were part of a group of more than 200 detained in Thailand in 2014. Although they identified themselves as Turkish citizens and asked to be sent to Turkey, more than 100 were forcibly returned to China in July 2015, sparking international condemnation.

China is believed to be holding up to one million ethnic Uyghurs, the United Nations human rights panel said in August. Uyghurs and other Muslims are held in concentration camp-like facilities, known as “re-education” centers.

U.S. lawmakers proposed legislation on Oct. 10 that urged President Donald Trump to condemn “gross violations” of human rights and to press for closure of the “re-education camps” in Xinjiang.