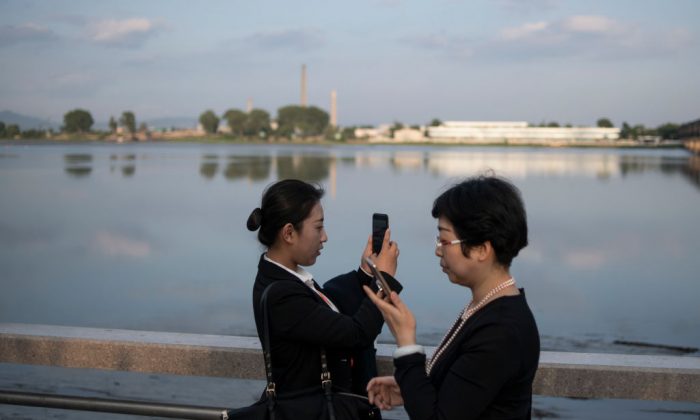 People take pictures by the Yalu River in the border city of Dandong, in China's northeast Liaoning Province, on May 30, 2018. (Fred Dufour/AFP/Getty Images)
Chinese Regime

In a sign of warming relations and easing sanctions, China plans to provide funding to complete construction on a bridge at the North Korean border.

Construction of the New Yalu River Bridge connecting Dandong City, Liaoning Province, in northeastern China with Ryongchon County, North Korea, was announced in 2012 to much fanfare, as a signal that the two regimes would enter a new era of trade and diplomacy.

It was meant to supplement the neighboring Sino–Korean Friendship Bridge, which was built during World War II and is in great need of repair.

Costing 2.2 billion yuan ($330 million) and partially completed in 2014, the New Yalu River Bridge was left unfinished amid deteriorating relations as North Korea conducted several nuclear tests that embarrassed Beijing. The bridge currently ends in a dirt field on the North Korean side.

But insider sources told Japanese Kyodo News Agency on July 20 that the Chinese leadership recently decided to provide 600 million yuan (about $88.3 million) in funding to finish building a road dozens of kilometers long that would allow vehicles to enter the bridge, in addition to a customs facility. The funding would be dispensed by the end of this year, the sources said.

The funding could be a violation of U.N. sanctions, according to Kyodo News Agency. The insider sources said China is also planning to negotiate with U.N. Security Council member states to ease economic sanctions on North Korea while it works toward denuclearization.

The news emerges as Reuters reported on July 24 that gasoline prices have fallen dramatically in North Korea, suggesting that China and other countries are again sending oil into the isolated state, against UN sanctions.