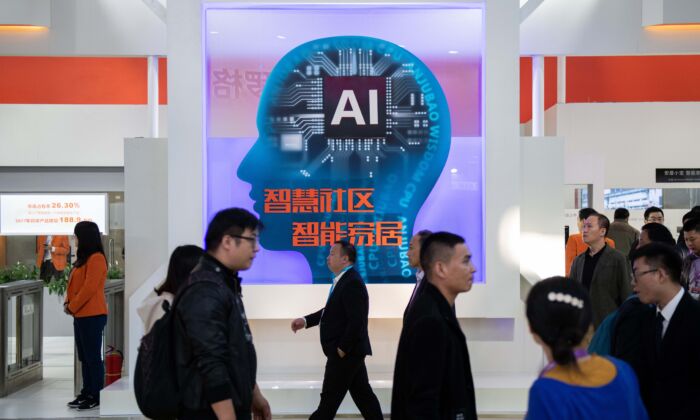 China “is weaponizing [Americans’] personal information” to bolster its artificial intelligence (AI), military, and espionage capabilities, according to a cyberintelligence expert who is calling for the United States to take reciprocal action against the Chinese regime.

“We see a weakening China, which is not what they are telling the world they are [economically],” said Bob Gourley, a cyberintelligence pioneer and former chief technology officer at the Defense Intelligence Agency. “It’s going to put a lot of stress and pressure on them to find new sources of revenue.”

“These new sources of revenue are things that include exploitation of intellectual property, more ransomware, more direct theft electronically,” he told NTD earlier this month. “I see the near future as being one of a lot of dangers from Chinese surveillance.”

The surveillance used in AI helps to coordinate and correlate user data, and can be utilized to analyze and attribute details to an individual, Gourley said.

“This is a real threat when a surveillance state like China puts [its] computing power behind it.”

High-tech surveillance states can take advantage of the world’s social media data, calling it “new threats” to the world today, Gourley says. Through data that people publicly share, AI can produce a profile of what anyone has been doing, where they are, and who they associate with.

Facebook revealed in March 2021 that it had blocked Chinese hackers from using the social media platform to track Uyghur activists living abroad, including journalists and dissidents living in the United States, Australia, Canada, Syria, Turkey, and Kazakhstan.

Some of the hackers compromised users’ devices and others created fake Facebook accounts to befriend a target and trick them into clicking on a malicious link that might compromise their device.

“If it makes us timid and afraid to speak out, it hurts us,” Gourley said. “Protecting our freedom of speech requires mitigating this threat of global surveillance from China.”

He said the United States should treat private information as if it were a weapon against China’s global surveillance over individuals.

“Because they are weaponizing our personal information.”

While China harvests public information on social media, it also gains access to private data by providing IT and computing power to recipient countries, according to Gourley.

“[Countries] have to pay for it, they sign long-term contracts for it,” he said. “But when that’s put in place, they rarely understand the fact that China now has access to their data.”

He draws a comparison with China’s Belt and Road Initiative (BRI, also called One Belt One Road), a state-backed global infrastructure plan that critics say is designed to expand the country’s geopolitical power overseas in the name of economic cooperation.

The intelligence expert described such investments and partnerships as a lesser-known “digital version” of the BRI, to obtain foreign data.

“This digital Belt and Road Initiative is feeding the surveillance state with data, and that data, of course, is the fuel for artificial intelligence, which is a key solution for their surveillance needs.”

The stolen data can empower the regime’s AI for both profit and military purposes.

In early 2021, the National Counterintelligence and Security Center (NCSC) stated that Beijing has used investments in U.S. biotech companies and partnerships with hospitals and universities to gain access to U.S. health care and genetic data.

Vast amounts of genomic information can fuel developments in the cutting-edge field of precision medicine, allowing China to overtake the United States to become a global leader in biotechnology, NCSC stated in a fact sheet. Such data can also be weaponized to target individuals in the country for intelligence and military operations.

China’s newest five-year plan, which covers the period until the end of 2025, mentions “genetic and biotechnology research” as a key area essential to national security and development.

“And I think it really makes for a dangerous time these next two or three years.”

He urged the U.S. government to start thinking about that asymmetry and to sever Beijing’s access to foreign servers.

“If there are rules in China about them accessing our systems openly, shouldn’t we put the same rules in place here? And I think that’s a very fair question to ask.”

Last week, Beijing’s cyberspace watchdog said that starting on Feb. 15, Chinese platform companies holding the personal data of more than a million users will go through a cybersecurity review before listing shares overseas.