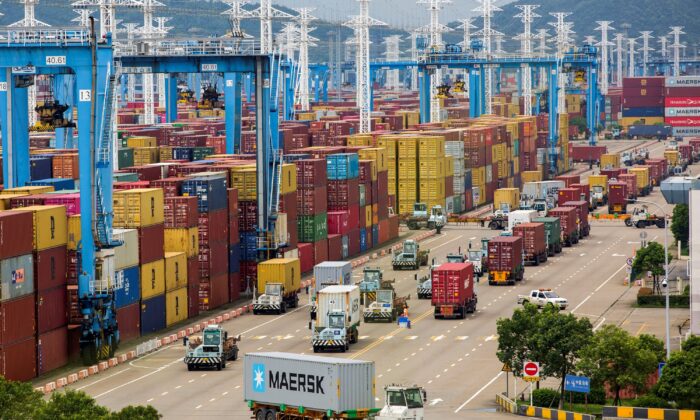 Lines of trucks are seen at a container terminal of Ningbo Zhoushan port in Zhejiang Province, China, on Aug. 15, 2021. (cnsphoto via REUTERS)
US-China Relations

China’s failure to meet the import targets agreed to under the “phase one” trade agreement with the United States signed in January 2020 can’t be blamed wholly on the global COVID-19 pandemic and supply-chain disruptions, according to a new report issued by the Peterson Institute for International Economics (PIIE).

The failure reflects unrealistic import targets that China was never actually on track to meet, while some degree of bad faith on both sides of the deal also came into play, the report states.

Under the “phase one” trade agreement, Beijing committed to increasing its purchase of U.S. products across the agricultural, energy, and manufacturing sectors in 2020 and 2021 by at least $200 billion beyond what China had purchased in 2017. The targets were at least $227.9 billion worth of U.S. products in 2020 and at least $274.5 billion in 2021, totaling $502.4 billion for the two years in question.

In particular, Trump hoped to turn the United States from a minor supplier of energy to China to a major one and incorporated especially high targets for coal, crude oil, liquefied natural gas, and refined energy products in the agreement. It was expected that the deal would help put an end to the escalating trade war between Washington and Beijing, during which hundreds of billions of dollars worth of tariffs were put in place by both sides.

The PIIE report set out to analyze all of the factors behind this failure.

The Role of the Pandemic

The report makes no attempt to discount the disruptive effects of COVID-19, which spread throughout the world in 2020. For all the optimism, the agreement had the misfortune of being signed just two months before the global pandemic really took hold, causing lockdowns and staff shortages worldwide.

“The emergence of the COVID-19 pandemic undermined any chance of success. Public health-related lockdowns and a short economic recession were accompanied by a temporary collapse in goods trade globally, even if China’s imports were mostly spared. Restrictions on mobility also decimated U.S. services exports like tourism and business travel,” the report reads.

The economic recession that beset the United States in April 2020 and May 2020 hurt gross domestic product growth for the year, and in the first of those two months, global trade briefly broke down, according to the report. Companies struggled to adjust to new remote work arrangements and to find their way in the uncertain environment.

Having said all of that, the report shows abundant data that militate against trying to blame China’s import shortfall on the pandemic.

“Global goods trade rebounded in the second half of 2020 and boomed in 2021, in part because COVID-19 shifted consumer demand toward goods and away from services,” the report reads.

While this did put stress on supply chains, especially on the U.S.–China route, some price inflation might actually have helped China meet purchase goals, given that the “phase one” agreement’s targets are stated in value (a dollar amount) rather than volume of goods, the report states.

Hence, the failure to meet “phase one” targets can’t simply be dismissed as an expected and perhaps inevitable consequence of the pandemic.

It should have been clear as far back as 2020 that China wouldn’t reach the import targets established under the deal, given the rate of its imports of U.S. goods, according to the report.

“The Biden administration was not to blame, as China was never on pace to meet its purchase commitments,” the report reads.

After the deal’s signing on Jan. 15, 2020, it should have been clear from prorated import goals and totals that the rate and total value of imports were falling short, the report states. At the end of June 2020, China had taken in 54 percent of the prorated target for that juncture. When the end of 2020 rolled around, China had realized only 59 percent of the year-end commitment. It wasn’t possible to catch up from that point given the rate of imports.

It should have been clear to CCP officials that China wasn’t taking in enough goods to meet the “phase one” pledge and that a net shortfall at the time of the deal’s expiration was inevitable, absent a marked shift in trade policy and a vastly accelerated intake of goods.

“China ended up buying none of that extra $200 billion of U.S. exports it had promised to purchase,” the report reads.

Dennis Shea, a former deputy U.S. trade representative and U.S. ambassador to the World Trade Organization (WTO), told NTD Television, a sister media outlet of The Epoch Times, that structural problems within the Chinese economy account for the import shortfall.

“There are state enterprises that are funded by state-owned banks and are pursuing state-created industrial policies and are benefiting, frankly, from state cyber-espionage and industrial theft. These structural problems within the Chinese economy are massive,” Shea said.

In light of China’s deal-breaking, Shea urged the Biden administration to “show strength,” and be willing to “impose costs” on the regime.

“China has just not lived up to its commitments. Its non-market economic system is completely incompatible with WTO norms of transparency, openness, and market orientation grounded in the rule of law,” he said. “These are the norms and values that are supposed to underpin the multinational trading system and the WTO. And clearly, China’s economic system is incompatible with those sets of norms.”

Myron Brilliant, head of international affairs at the U.S. Chamber of Commerce, told Reuters on Feb. 9 that closer collaboration between the United States and allies, with a view to presenting a strong united front against Beijing over its failure to follow fair and transparent trade practices, is one of a number of options on the table for the Biden administration.